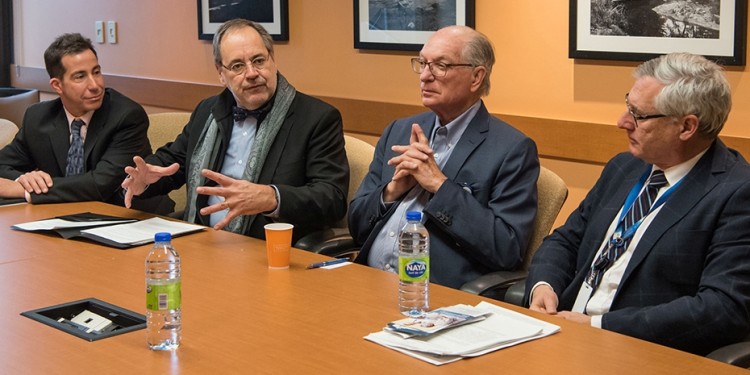 Researchers in the Lady Davis Institute (LDI) at the JGH are among investigators from across Canada who will share in new federal funding of $2.5 million for research into various types of dementia, including Alzheimer’s disease.

The funds are being provided by the Canadian Institutes of Health Research (CIHR), as part of its Dementia Research Strategy. In addition to the JGH, recipients include McGill University, the University of British Columbia, the University of Ottawa and Quebec’s National Institute of Scientific Research.

In a news conference at the LDI on January 23, Anthony Housefather, Member of Parliament for Mount Royal, welcomed the announcement, adding that when the disease strikes, “it’s important to remember that it’s not only the person affected, but their entire family.”

Mr. Housefather, who was representing Health Minister Ginette Petitpas Taylor, said one of his objectives “at the federal level, as much as possible, is to try to convince the Minister to provide funding for this very important issue.”

The need for coordinated dementia research has gained urgency in recent years, since more than 400,000 Canadians aged 65 and over are experiencing some type of dementia. Of these, approximately 280,000 suffer from Alzheimer’s, a degenerative brain disease whose cause is largely unknown, and for which no effective treatment exists.The funds will be used for two key purposes:

The Canadian ADNI Brain Bank Network will be administered at the LDI by a group headed by Dr. Howard Chertkow, co-founder and Director of the JGH/McGill Memory Clinic. In fall 2014, Dr. Chertkow was appointed by the CIHR as Scientific Director of the Canadian Consortium on Neurodegeneration in Aging, a national network of scientists, whose goal is to prevent or delay the onset of dementia and related illnesses.

“We are taking our place among international leaders in dementia research,” Dr. Chertkow stated shortly after the January news conference. “Thanks to patients who generously donate their brains for research, we will have an opportunity to explore significant variations in how dementia expresses itself, and to use this valuable information to advance the search for new treatments.”

Head of JGH Foundation honoured for outstanding career in philanthropy