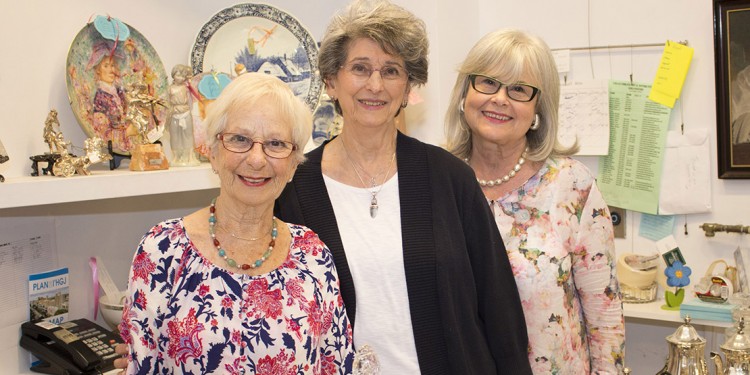 After getting together to reminisce about their experiences in the JGH Auxiliary, three former Presidents—(from left) Rachelle Douek, Rona Miller and Lucy Wolkove—visited The Auxiliary’s Art and Antique Shop.

Chatting with three Past Presidents on The Auxiliary’s 80th anniversary

Being away from the JGH Auxiliary for a while in the 1970s, and then returning several years later, was what finally helped Lucy Wolkove realize what she found so unique about the organization she loved: its warmth and camaraderie.

That feeling was rekindled this past summer, as Ms. Wolkove joined two other Past Presidents to reminisce about their experiences, just as The Auxiliary was about to hit a historic milestone—its 80th birthday. Special events and celebrations to commemorate the anniversary will be rolling out over the coming months.

Ms. Wolkove recalled that when her husband was an intern more than 40 years ago, “I got together with some of the other wives to form an Interns’ Wives Club”—she pauses for a hearty laugh—“which, today, would be so inappropriate on so many levels! A while later, we moved to Philadelphia, where my husband did his fellowship.

“Then, when I came back, Claire Sheiner was President (1974 to 1977), and she asked me to come in to talk about a cookbook they were working on. I found that a lot of the women who had been in the Interns’ Wives Club were also involved in this project. And I felt such wonderful camaraderie. It put it all into focus for me.”

“When you were President, nothing ever happened without the Past Presidents being there to support you,” added Ms. Miller. “That’s what helped pull me in—the feeling of working together with friends, plus the fact that nobody was ever looking for awards or rewards.”

The Auxiliary, originally known as the Women’s Auxiliary, was founded by volunteers who attended a garden party hosted by Annie Goldbloom in 1936. Circled in red is Bessie Pesner, the aunt of Past President Rona Miller.

Ms. Douek noted that The Auxiliary is continuing to implement numerous fund-raising projects whose proceeds contribute to the well-being of patients—traditionally, a key aspect of The Auxiliary’s raison d’être.

Even so, Ms. Wolkove said, much has changed over the decades, especially since the days when the hospital was much smaller and members of The Auxiliary sometimes played unexpected roles. For example, when the JGH was feeling the impact of a Montreal-wide nursing strike many years ago, “The Auxiliary President and members of the executive were out there washing sheets and feeding patients. Being in this hospital was like being in a family.”

The Auxiliary: A thumbnail sketch

In 1936, two years after the JGH opened its doors, The Auxiliary (then known as The Women’s Auxiliary) was created at a now‑legendary garden party by Annie Goldbloom and a group of committed volunteers, including Bessie Pesner, the aunt of Past President Rona Miller (see photo).

During the Great Depression of the 1930s and throughout the 1940s, members of The Auxiliary ensured that funds were available so that many life-saving necessities, such as blood transfusions, would be available to patients. The Auxiliary purchased equipment (like an iron lung and an oxygen tent), supplied the hospital with sheets, pillowcases and towels, helped prepare millions of bandages and surgical dressings, and gave diapers, baby clothing and blankets to needy new mothers.

Immediately after World War II, as Jewish refugees arrived in Montreal, The Auxiliary established a special Medical Social Service to provide Holocaust survivors with counselling, translators and even financial aid.

The Auxiliary’s volunteers served as the model for the creation of the JGH Department of Volunteer Services in the early 1950s, and their fund-raising efforts helped to inspire the development of the JGH Foundation in 1969. Under The Auxiliary’s auspices, Hope & Cope was launched in 1981 and, eight years later, went on to become an independent organization, offering support and counselling to cancer patients and their families.

Today, as they celebrate The Auxiliary’s 80th anniversary, many volunteers continue to raise funds to meet a wide array of hospital needs. Some projects are large (such as the Tiny Miracle Fund, which enables new equipment to be purchased for Neonatal Intensive Care), while others are more low-key and focus on humanizing patients’ hospital experiences.

Among The Auxiliary’s many activities:

These sorts of emotional bonds motivated all three women to maintain their ties with The Auxiliary or the JGH when their terms ended. Ms. Douek is a volunteer in the Emergency Department and has served on the executive of the Quebec Association of Hospital Auxiliaries. Ms. Wolkove was also involved in the Association of Auxiliaries and is an adviser on The Auxiliary’s Tiny Miracle Fund (to purchase equipment for Neonatal Intensive Care). As a former nurse, Ms. Miller had a hand in developing the volunteer program in the Emergency Department, as well as pitching in, as needed, on a variety of projects.

With time slipping slowly by, the women have also assumed unofficial roles as links to the organization’s past and guardians of The Auxiliary’s collective memory. “Unfortunately, there are now fewer and fewer people with that sense of history,” said Ms. Wolkove, “so we’re the ones who are called upon.

“It hasn’t always been easy, but it’s been rewarding. When I was President, my line always used to be, ‘You couldn’t pay me enough to do this job, but for free, I’ll do it!’”

From the archives: Visit from a princess