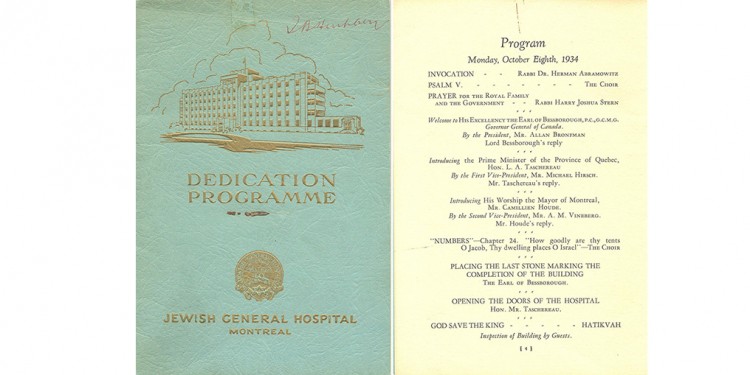 Cover and agenda page from the commemorative program booklet that was distributed at the ceremony to open the JGH on October 8, 1934.

In fall 2009, JGH News marked the hospital’s 75th anniversary by publishing a variety of articles, including the reminiscences of HCol Bernard J. Finestone, CD, CdeG, (Ret’d), a Past President of the hospital. Included in his article was the following description of the opening ceremony:

Bernard J. Finestone, Past President of the JGH.

On October 8, 1934, at the age of 14, I was among the thousands who lined Côte Ste‑Catherine Rd. to witness the launch of what would become one of Quebec’s leading healthcare institutions.

The inauguration of a hospital, especially in the dark years of the Depression, was an event of great significance. That’s why so many dignitaries were expected, including the Governor General of Canada, Lord Bessborough.

The organizers decided the Governor General ought to have a guard of honour, but no Jewish soldiers were available. So my friends and I—a Boy Scout troop from Congregation Shaar Hashomayim—were recruited instead.

You could feel pride in the air, because a magnificent building had been erected by the Jewish community. Since many of the spectators were unemployed due to the Depression, they flocked to this event to have their spirits lifted by the good news and the renowned speakers.

So there we were, in our blue Scout jackets, short pants and flat hats. We marched in just before the Governor General arrived, and then the ceremony began. Over the next two hours, it was clear that everyone, even youngsters like us, understood what the Jewish General Hospital meant. What a grand occasion! Finally, the ribbon was cut and the Governor General went inside for a tour.

Invitation to the 1934 ceremony to launch the JGH.

Special admission card that was issued to dignitaries seated on the main platform at the ceremony to open the JGH.