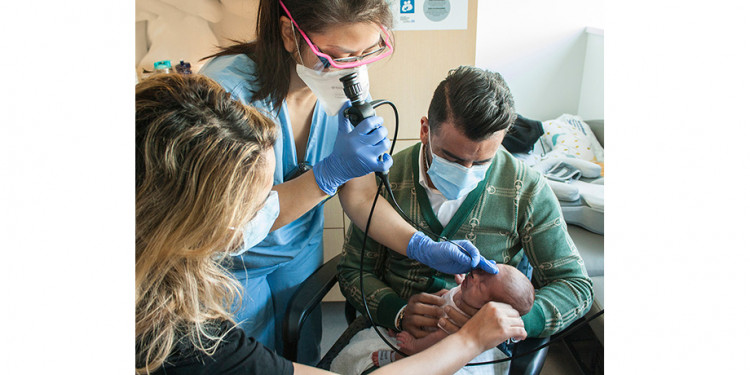 In the Neonatal Intensive Care Unit at the JGH, Mehdi Kdioui (seated) soothes his 11-week-old daughter, Radia, during an evaluation of the infant’s ability to swallow properly. After Radia has been bottle-fed, Dr. Carol Nhan (standing), a pediatric otolaryngologist, inserts a thin, flexible fibre-optic tube into the child’s nasal passage. Then she looks through an eyepiece to examine the baby’s throat. Also playing a key role in the evaluation is the baby's mother, Wessal Hilali.

Premature infants who have difficulty swallowing are now being assessed in the Neonatal Intensive Care Unit at the JGH, instead of being transferred elsewhere for evaluation.

The in-house assessments were launched after more than two years of efforts by Dr. Nina Nouraeyan, a JGH neonatologist, and her colleagues to purchase new equipment and bring together the relevant professionals from pediatric hospitals.

The initial evaluations were conducted on November 4 by Dr. Carol Nhan, a pediatric otolaryngologist, and by Occupational Therapist Megan Smith-Morin, who visits the unit regularly to advise parents on feeding techniques that are customized to the needs of each infant.

“Today I feel we’ve accomplished something really important as a team,” Dr. Nouraeyan said after the first minimally invasive evaluation was completed.

“These are fragile babies and they’ve been through so much. We want to make sure that when we send them home, they’re as safe as they can possibly be and are doing the one thing they need to do, which is to feed and grow.”

Dr. Lajos Kovacs, Chief of Pediatrics and Neonatology, said infants and parents have received strong support from the Montreal Children’s Hospital whenever a transfer was necessary.

“But the fact is, moving these babies is very disruptive,” Dr. Kovacs added. “It can be traumatic for the family to have to pack their bags and go to another hospital where they don’t know anybody and nobody really knows their baby.

“Now that the evaluations are being performed here, the infants are under the supervision of staff whom the parents have gotten to know and are comfortable with.”

However, Dr. Kovacs noted that since Dr. Nhan practices mainly at Sainte-Justine Hospital and at the Children’s, she is only available once a month to perform evaluations at the JGH. As a result, some infants may still have to be sent from the JGH to the Children’s if a prompt assessment is needed.

The push to bring the assessment to the JGH began in mid-2020, after Dr. Nouraeyan and Ms. Smith-Morin noticed that more infants than usual were being transferred. They agreed there had to be a better way, for the sake of the family and also because it is costly to have a baby transferred by ambulance and accompanied by medical staff.

“Our tiny babies are born so early that some of them are not very coordinated when it comes to breathing, swallowing and drinking.”

This prompted them to contact their colleague, Dr. Nhan, who specializes in aerodigestive problems. She agreed the project was important and said she would be thrilled to be a part of such a meaningful initiative.

Dr. Nouraeyan then pitched the project to her colleagues in Neonatology and convinced all of the members of her team to earmark the funds to buy three endoscopes.

“We’re very happy that everything was done here,” said Wessal Hilali, whose daughter, Radia, was born in mid-August at 28 weeks of gestation, weighing a mere 730 grams (a little over 1½ pounds). “Sometimes she has been very congested. It was hard for her to breathe or swallow the right way.”

“Our tiny babies are born so early that some of them are not very coordinated when it comes to breathing, swallowing and drinking,” Dr. Kovacs explained. “It’s something you don’t usually think about too much when you’re older: You move your tongue, then swallow, then breathe, and you get used to not doing all of these things at the same time.

“But for premature babies, it’s a real challenge to learn this technique, because they’ve relied so much on a tube to feed or breathe. Even when they get close to the age when they would have been born at nine months, some of them haven’t quite learned it.”

For this reason, an evaluation is needed to observe what is happening in the infant’s airway during feeding. Then adjustments are introduced in real time to make feeding safer and more effective.

During the examination (known as a fibre-optic endoscopic evaluation of swallowing), an endoscope—a thin, flexible tube that can capture visual images—is inserted by the otolaryngologist into the baby’s nasal passage and down the throat.

As the infant drinks at the breast or from a bottle, the physician looks into an eyepiece and watches for signs that the milk may be entering the airway or that swallowing may be ineffective. In bottle-feeding, the milk is tinted blue, so that the liquid’s path through the baby’s throat can be tracked more easily.

According to Dr. Kovacs, this is a dynamic form of evaluation, since it allows changes—such as shifting the baby’s position or altering the consistency of the bottled milk—to be made as soon as the infant experiences any difficulties. Then the effects of these changes are immediately assessed.

Dr. Kovacs said most of the babies who need to be assessed were born at 23 to 27 weeks. However, the endoscopic evaluation is conducted about 11 weeks—and sometimes as much as 16 weeks—after birth, usually shortly before the infant is ready to be sent home.

Eventually, he said, he hopes his department will be able to purchase equipment that will allow the fibre-optic cable to be connected to a camera and monitor. This will enable other professionals, as well as the parents, to see what is currently visible only to the otolaryngologist.

It will also to ensure clear communication of the findings, so that the parents and treating team can understand why the recommended adjustments to feeding are necessary and how they can be implemented.

“It was a team effort, but Dr. Nouraeyan coordinated the plan and pulled it together,” Dr. Kovacs said. “She deserves a lot of credit for her perseverance and her vision of what we could be doing here.”

In this video, Dr. Carol Nhan, a pediatric otolaryngologist at the Jewish General Hospital, performs a fibre-optic endoscopic evaluation of an infant’s ability to swallow while being bottle-fed.