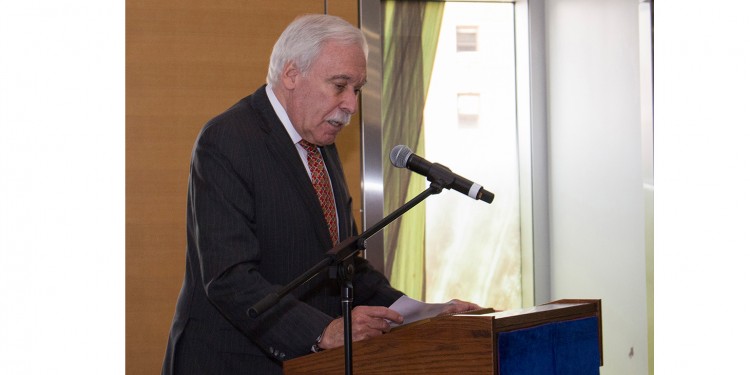 Allen F. Rubin, who was instrumental in providing stability and continuity to the JGH during the reorganization of the healthcare system in 2015, has received the hospital’s greatest honour, the Distinguished Service Award.

The award, a highlight of the program at the combined Annual General Meetings of the hospital and the JGH Foundation, was presented on September 18 to Mr. Rubin, who called his years of service “exceptionally and profoundly exhilarating.”

As a result of changes to the healthcare system in 2015, boards of directors in all of the Quebec’s healthcare institutions were dissolved. Since then, however, certain institutions have established boards of governors—in the case of the JGH, to oversee long-range planning of the hospital’s physical development, to work closely with the Foundation, and to protect and preserve the hospital’s unique character, legacy, values and standard of medical excellence.

“It is a singular honour and a privilege to have been part of this fantastic institution,” Mr. Rubin told the audience, “and I accept this recognition on behalf of all those who helped me get here today.”

He explained that his job was made easier by the guidance, coaching and mentoring that he received from colleagues in the JGH and Foundation, as well as support from his family. He was also delighted to give time to “a hospital with dedicated staff, administrators and volunteers, with superb medical care for all, and surrounded by purpose and by vision.”

Dr. Lawrence Rosenberg, President and CEO of CIUSSS West-Central Montreal, described Mr. Rubin’s two-part term as “integral to the leadership of the Jewish General Hospital, as it made its transition into our current healthcare network.

“To say that Allen helped steer our hospital through a challenging and uncertain period is an understatement. The JGH was embarking on an unprecedented chapter in its history, and for this reason, Allen worked tirelessly to ensure that the hospital would continue to be able to honour its legacy by retaining its unique character, its distinctive cultural identity and its mission.

“In working closely with Allen during the transition, I personally saw him bring all of his best qualities to bear in guiding our hospital into this new era.”