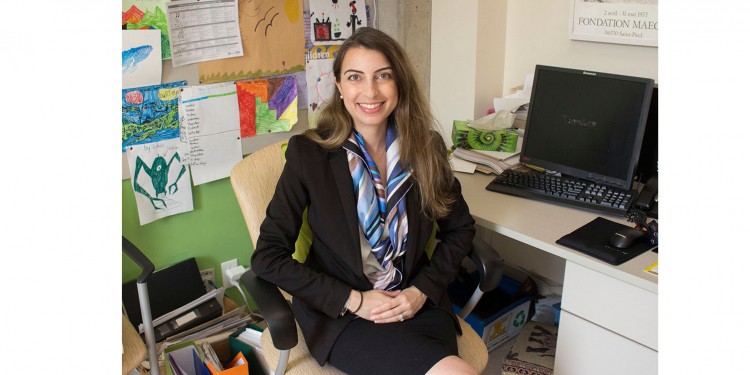 Dr. Habib, an Assistant Professor of Psychiatry at McGill University, trained in the United States and has a particular interest in cultural psychiatry. She also completed an Utting Fellowship at the JGH in 2014.

Dr. Michelle Elizov, a member of staff in the JGH Division of Internal Medicine, has been appointed Assistant Dean of Faculty Development at McGill University. Until earlier this year, Dr. Elizov had served for two years as Director of Medical and University Education for CIUSSS West-Central Montreal. She was also the JGH Site Program Director for the Internal Medicine Training Program.

Dr. Fackson Mwale and Dr. Volker Blank, of the Lady Davis Institute (LDI) at the JGH, have been appointed full professors at McGill University.

Dr. Mwale, a Senior Investigator at the LDI, is Head of the JGH Orthopedics Research Lab. An internationally recognized scientist in orthopedics and spine research, he co-chaired the 11th Canadian Connective Tissue Conference in Montreal in 2005.

Dr. Blank, a Senior Investigator at the LDI and an Associate Member of the Department of Physiology at McGill, is internationally recognized for his research in erythropoiesis (the production of red blood cells) and cancer. He participated in the first cloning and analysis of a transcriptional regulator that plays a key role in immunity and infection.

The JGH Division of Cardiology has welcomed Dr. Michael Goldfarb, appointing him Director of Quality for the Cardiac Intensive Care Unit. Among his duties will be studying how to apply the quality-enhancing activities of ICUs (such as the Azrieli Medical and Surgical ICU at the JGH) to patients in the hospital’s Cardiac ICU.

Dr. Goldfarb also has an interest in speeding the recovery of cardiac patients through early mobility—that is, encouraging them to become physically active as quickly as possible. His clinical work will be complemented by research to develop ways of optimizing care among frail cardiac patients.

Dr. Stephanie Klam and Dr. Elise Levinoff were among the medallists this past summer in Tel Aviv at the Maccabiah Games, the world’s third-largest international sporting event. For both JGH doctors, the games marked a return to competitive swimming after an absence of several years.

Both doctors underwent intensive training for the Maccabiah Games, often squeezing in practice sessions—up to four per week—at their local pools before daybreak. Despite the demanding hours, they said they felt invigorated when they arrived at the hospital for work.

“You become a role model for your children, teaching them the importance of discipline, of practice, of making the effort,” notes Dr. Klam. “Now that I’ve returned to Montreal,” adds Dr. Levinoff, “I’m eager to set and break even more personal records.”