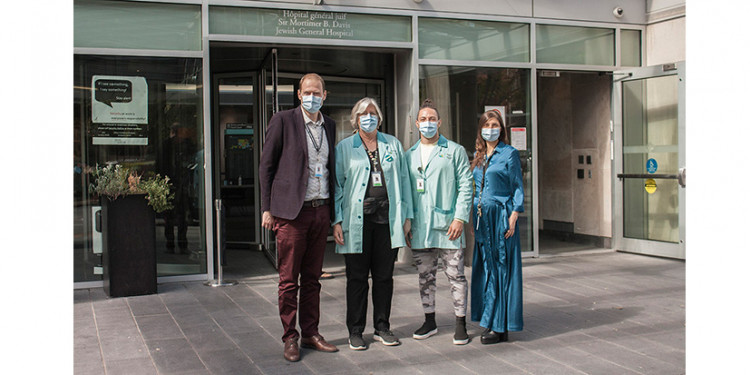 For Stavros Simonian, being a doctor means making an extra effort to help patients, regardless of his own personal circumstances. So after earning his M.D. in Syria and immigrating to Canada, Mr. Simonian decided to do more than prepare for his equivalency exams: He became a volunteer at the JGH.

Since May, Mr. Simonian has become a familiar face in the Emergency Department, where he spends six hours a day, two or three days a week, assisting patients and visitors, preparing various types of medical kits and lending a hand wherever needed.

Mr. Simonian, who also works occasionally at the Saint Andrew Residential Centre, is one of a steady stream of volunteers who have been stepping forward to lend their support to the JGH and other facilities across CIUSSS West-Central Montreal, now that the immediate threat of the COVID-19 pandemic has eased.

Like so many volunteers, Mr. Simonian says he derives great satisfaction from his work, but it also has practical value: He’s using the opportunity to get comfortable with the Canadian healthcare system and acquire experience in the day-to-day operations of a major acute-care hospital.

“The nurses and everyone on staff have been super-helpful and they’re continuing to give me really valuable advice about how care is provided,” says Mr. Simonian, who plans to apply for a medical residency (in a specialty he has yet to choose), once he passes his equivalency exams.

Though a significant number of volunteers are newcomers, Helen Fleischauer is among the many returning veterans for whom volunteering has become a way of life.

“It’s amazing how strongly our volunteers feel about helping vulnerable people and making this hospital a better place.”

Back in 2011, she had already established a successful business as a freelance translator, dealing mainly in documents related to engineering, science and public health.

“But I was getting tired of sitting in front of my computer all day and talking to no one but myself,” Ms. Fleischauer recalls. “I said to myself, ‘I really need to get out to see people and help them.’”

That led to her long association with the x-ray section of the JGH Department of Radiology. “When I signed up, I was asked if I wanted to work at a computer, but I politely said, ‘No, thank you! I want to move around and talk to people.’”

During a five-hour shift once a week, Ms. Fleischauer prepares patients to get x-rayed, as well as chatting with them and trying to cheer them up if they’re feeling low.

She says it felt unnatural to be away from the hospital for so long during the pandemic, but once she returned earlier this year, “I slipped right back into it. Of course, there have been some changes, since a few people on staff have retired, but a lot of the old gang is still there.”

This combination of novices and old hands has turned out to be “a highly effective cocktail,” says Marko Obradovic, who has been busy replenishing the ranks of the volunteers since March, when he became the CIUSSS’s Chief of Volunteer Services. Previously, he had spent six years with the healthcare network in Labour Relations.

At the JGH, he says, at least 85 volunteers have been deployed to more than 40 departments. A collaboration has also been developed with McGill and Concordia universities to have students provide assistance in the Intensive Care Unit.

“The numbers are below what they used to be,” Mr. Obradovic admits, “but keep in mind that we started from scratch last March and April. The number was literally zero.”

However, he adds, once the most restrictive COVID-related measures were relaxed, numerous individuals came forward to give of themselves at many locations.

For example, there are now 12 to 15 volunteers at the Lethbridge-Layton-Mackay Rehabilitation Centre, where assistance is provided to children with hearing disabilities, and help is offered in creating braille documents.

At Mount Sinai Hospital, at least 15 volunteers are involved in various activities, including the Celebration of Life, a memorial ceremony for the families of residents who have passed away in the hospital.

Wherever possible, volunteers are matched with the departments and types of care that reflect their own interests, says Nancy El Mallah, Coordinator of Volunteer Services for the JGH.

Often, she says, people come forward as a way of expressing gratitude for the care the hospital has provided to them or a loved one. “They want to actively do something and give something to the hospital. It’s amazing how strongly they feel about helping vulnerable people and making this a better place.”

Ms. El Mallah adds she’s proud to be helping the JGH continue its long tradition of welcoming volunteers and making the most of their desire to help.

That’s a sentiment Ms. Fleischauer shares. “After 11 years, I feel I belong here,” she says. “Just walking along the hallways, I recognize people I’ve known and said hello to for years. It feels like home.”