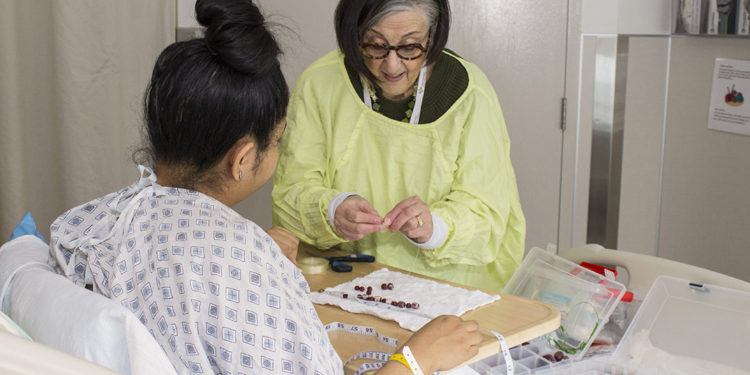 Rhoda Smith, a volunteer in The Auxiliary’s Ante Partum Program, shows Adriana Rosales how to use wooden beads to make a bracelet. This helps Ms. Rosales to pass the time creatively during her lengthy hospitalization, while her high-risk pregnancy is monitored.

For Adriana Rosales, being a patient at the JGH initially aroused a mix of sometimes contradictory emotions. On one hand, she felt reassured by the quality of the care that she was receiving for her high-risk pregnancy. But her lengthy hospitalization—three weeks and counting—often gave rise to boredom and impatience.

So, in stepped the JGH Auxiliary to ease Ms. Rosales’ stress by inviting her to tackle a number of diverting and creative crafts projects. With help from Rhoda Smith, a volunteer in The Auxiliary’s Ante Partum Program, she completed a blue woven hat for her infant-to-be and was now eagerly learning to string wooden beads for a bracelet. 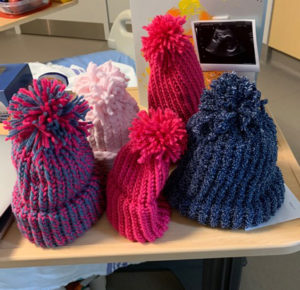 A selection of caps made by patients in The Auxiliary’s Ante Partum Program.

“I have so much time to fill, and it would be very hard without something interesting to do,” said Ms. Rosales, who expects to give birth to a boy—her second child—on April 7. But as of late January, she still had no idea how much longer she would be on bed rest at the JGH.

“Rhoda has been so gentle with me and she takes the time to find out what I like to do,” Ms. Rosales added. “I am hardly ever allowed to get out of bed, so I need a way to keep busy, and this is such a relief.”

Since its launch in 2017, the Ante Partum Program has been lifting the spirits of pregnant women who are confined to their JGH beds. Perhaps their water has broken early or they’ve experienced bleeding, high blood pressure, early contractions, premature labour, the presence of twins or triplets, or other conditions. 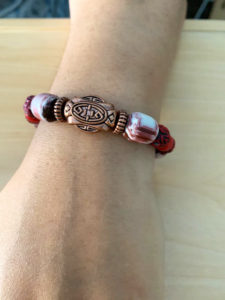 A beaded bracelet strung by a patient in the Ante Partum Program.

In these types of situations, they’re off their feet for an extended period—an average of a week or two, but anywhere from several days to as much as three or four months. Thanks to The Auxiliary, they can occupy their time with a variety of crafts projects, including beading, decoupage, painting, making bracelets and necklaces, and weaving hats or scarves on a loom.

The Ante Partum Program is part of a broader emphasis that The Auxiliary has been placing, over the past several years, on fulfilling the needs of pregnant women and their newborns, especially helping premature babies through the Tiny Miracles Fund.

“We’re thrilled to support a unique initiative like the Ante Partum Program,” says Auxiliary Director Nancy Rubin. “By helping to tend to the emotional and psychological aspects of pregnancy, particularly in difficult or high-risk situations, we’re hoping to raise the odds that healthy babies will be delivered and the patients will embrace motherhood with optimism and happiness.” 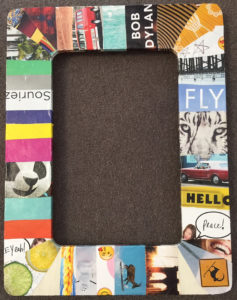 A picture frame whose decoupage was applied by a patient in the Ante Partum Program.

While the crafts provide the women with a sense of tranquility and accomplishment, the most important element is the interaction between these patients and the volunteers, says Rhona Daitchman, an Auxiliary volunteer who developed the program.

“From the beginning, my main goal has been to create an emotional connection with the patients, and the crafts are simply the medium to help get them patients started,” Ms. Daitchman explains. “Once a relationship is established with the patient, creativity brings relief and it allows a feeling of accomplishment to emerge from what had been a scary situation.”

“It’s a way into their hearts, as well as a way of keeping them busy,” adds Ms. Smith.

Each woman in the program usually receives one or two visits per week. In general, the crafts cart stops by the rooms of about five women a day, although the number varies, depending on the types of patients who are admitted and the number who choose to participate.

“They’re on complete bed rest, pretty much alone in their private rooms, and bored silly,” says Ms. Daitchman. “So we motivate them with projects that enable them to make something for their baby or for themselves or for their other children.

“Also, we try to give them projects that aren’t long-term, because they may not have the patience for something so ambitious. Our projects can easily be picked up or set aside, depending on the woman’s mood. It’s also an active use of their time, instead of something passive, like watching TV.”

The crafts cart began rolling, as a result of an inspired idea by Ms. Daitchman, a retired nurse who had spent her 40-year career in perinatal nursing and the delivery caseroom ath the JGH. Since retiring in 2011, she had been an Auxiliary volunteer, but it was only a few years later that she came up with a project that she felt she could really pour her heart into.

“The head nurse in the Birthing Centre asked me to speak to the patients to explain various aspects pregnancy and childbirth, because I had the proper background,” says Ms. Daitchman, whose experience in obstetrics made her an ideal choice as a resource person.

“But I also thought to myself, ‘These women are stuck in the hospital for ages and they’re bored. Can’t we do something more for them?’ That got me thinking about arts and crafts.”

Backed by The Auxiliary, Ms. Daitchman and her cart began making the rounds in 2017. Later that year, she realized she would be away from Montreal for the winter, “and I needed someone to take over. That’s when I happened to run into Rhoda.”

Ms. Smith, too, was retired, having spent 35 years teaching children with special needs, notably at the Summit School. She had been an Auxiliary volunteer since 2008, and she readily agreed when Ms. Daitchman invited her to work in the Ante Partum Program. Today, both women not only visit the patients, but give of their own time to purchase the supplies that keep the cart well stocked.

Ms. Daitchman says their success has opened up the possibility of expanding to the Neonatal Intensive Care Unit, where “the mothers sit all day next to their babies who are in incubators, but the moms can’t always hold them. Our crafts would give them something to do.” Before this can happen, a number of details would have to be ironed out.

Meanwhile, the current program remains a source of considerable satisfaction. Ms. Smith remembers visiting one mother-to-be, in particular, “who was really scared and crying. I stayed with her and took the time to speak with her. Finally, she asked to see what I had in the cart.

“I showed her how to make a hat, and when I came by half an hour later, her face was lit up with smiles. During the week she was here, her whole outlook changed, and I’m happy that my involvement had something to do with that.”