Be patient when the elderly tell stories, geriatrician recommends 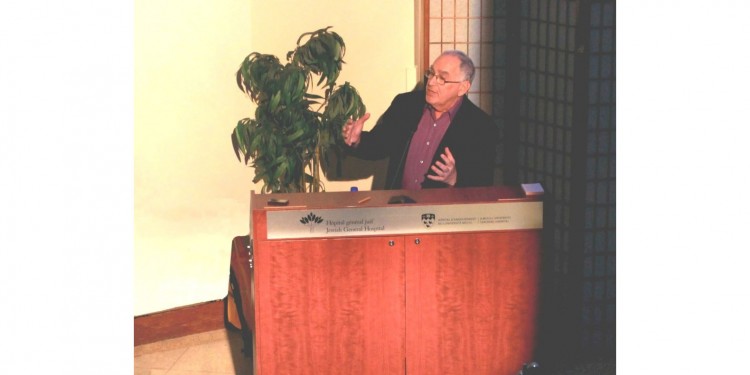 The next time an elderly person wants to tell you about his or her life, pay attention even if you’ve heard the story many times before, because story-telling is a crucial means of reinforcing that person’s sense of identity, a Canadian expert on aging told an overflow crowd at the JGH.

Dr. Michael Gordon, Medical Program Director of Palliative Care at Toronto’s Baycrest Geriatric Health Care System, explained that story-telling strengthens memories and associations. “Our world is really a collection of narratives, which is how we identify ourselves,” he said. “The fact that you may already know someone’s story is not the issue. The issue is that that person feels like telling it to you.”

For the same reason, he added, it’s often useful to share family photos with an elderly person who is cognitively impaired, since the pictures help to stimulate the mind and motivate that person to recall and tell stories about the people in the snapshots.

Dr. Gordon, who is Professor of Medicine in the University of Toronto’s Division of Geriatrics, spoke last fall to more than 300 people in the Block Amphitheatre, with an additional 50 watching on closed-circuit TV in the Nurses’ Lecture Hall. He was the inaugural speaker in the Goldie Raymer Memorial Lecture, organized by the JGH Division of Geriatrics.

Dr. Gordon described aging as one of the great achievements of modern times, joining illnesses such as high blood pressure and diabetes as conditions that used to be fatal, but can now be successfully managed for many years. However, he noted, this means that relatives of the elderly—and society in general—must be aware of their limitations and special needs.

In particular, Dr. Gordon cautioned, family members must be careful not to let their concern for an elderly individual’s well-being undermine that person’s independence. “As long as they’re making a decision that’s safe enough, you have to let it happen, because you can’t protect them completely. And if you are trying to protect a parent completely, you basically take away from them the ability to do anything.”