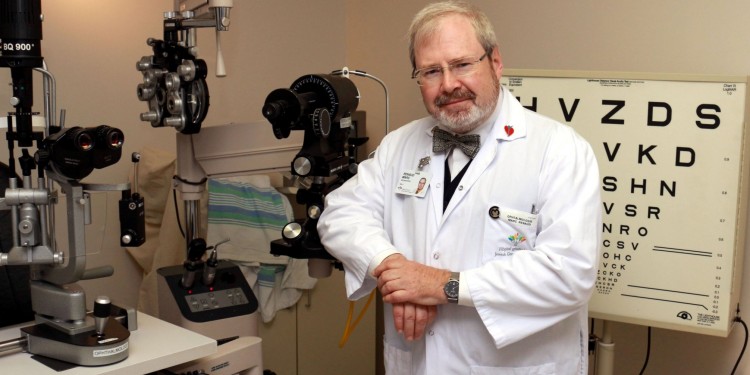 No one who knew me at a young age would have believed I’d end up working in a hospital. The only way my parents got me (usually kicking and screaming) through those doors was by promising me a Dinky Toy or a Matchbox car.

And yet, here at the JGH, I’m an Ophthalmic Technician, as well as Project Manager of the McGill Glaucoma Information Centre, where my colleagues and I heighten public awareness about preserving eyesight by detecting glaucoma before it does its worst.

So how did I arrive at a hospital, of all places? By following life in unexpected directions.

After earning a social studies degree and being admitted to the University of Montreal, my long-standing love of photography compelled me to enroll at Dawson College (to my parent’s dismay). As a freelancer in commercial and industrial photography, I eventually attained senior professional standing and served as President of the Corporation of Master Photographers of Quebec.

Then came one of those seemingly minor but life-changing events. While photographing the tall ships in Quebec City in the early 1980s, a colleague asked for help with a project at a centre for handicapped children. Afterwards, he told me that a friend at Laval University Hospital needed a part-time assistant in ophthalmic photography and angiography. Since there were only about seven angiographers in Quebec, and perhaps 30 in all of Canada, my friend figured I’d be curious. So off I went (what was I thinking?) for an internship to do lab work and become familiar with the field’s high-tech aspects.

Then out of the blue, on my return to Montreal in 1985, I got a phone call from the ophthalmic photographer at the JGH who had heard about me. Would I be interested in taking her place while she was on sabbatical? Of course! For a freelancer like me, a one-year contract at the JGH was a great opportunity.

When the year ended, I was invited to stay and be trained as an ophthalmic technician. This was followed by training in ocular electrophysiology and a position in the new low-vision laboratory, further training as an instructor to psychology students and residents, and work in assessing patients. In the meantime, I was also on staff as a teacher in the Continuing Education program at Dawson College.

My entry into the field of glaucoma came when I agreed to assist Doctor Oscar Kasner in the JGH Department of Ophthalmology, and also because I was intrigued by this mysterious disease. Since it strikes without prior symptoms, people tend not to take it seriously. Yet, glaucoma is the second most common cause of blindness globally, even though it can be controlled.

One day, Dr. Kasner and Carole Desharnais, a nurse in Ophthalmology, were scheduled to speak to patients. Since I’d had experience in teaching and delivering speeches, Dr. Kasner thought I ought to go along and say a few words. The presentation turned out so well that on that day, we became “the glaucoma team”.

That led to the creation of the McGill Glaucoma Information Centre, which educates and empowers patients, reaching many who are unaware of the disease’s devastating potential. After more that 105 conferences and numerous awareness activities, we’re still at it.

I’ve also arranged for dozens of news articles to be published on the subject, and we’ve even produced a DVD that has been distributed throughout Quebec and as far away as Africa and Haiti. By reaching out to the public through an education program that’s recognized worldwide, I feel great satisfaction in knowing that I’m contributing directly to saving people’s vision through education. I’m also proud to be part of a team that can really make a real difference in people’s lives.

One dream I have yet to realize: Finding a benefactor—whether an individual or a good corporate citizen—to provide support (at a modest level) for my bi-monthly presentations to community organizations, CLSCs, public libraries and similar groups. Admittedly, it’s become somewhat harder for me lately to carry so much of the load, and much to my chagrin, I’m sometimes forced to refuse requests for speaking engagements. Everywhere I go, I see a great need for information on this subject.

Which brings me to 2015—30 years and counting at the JGH. When the time comes to retire, who knows? I might just decide to stick with glaucoma education. Not bad for what started as a one-year contract.