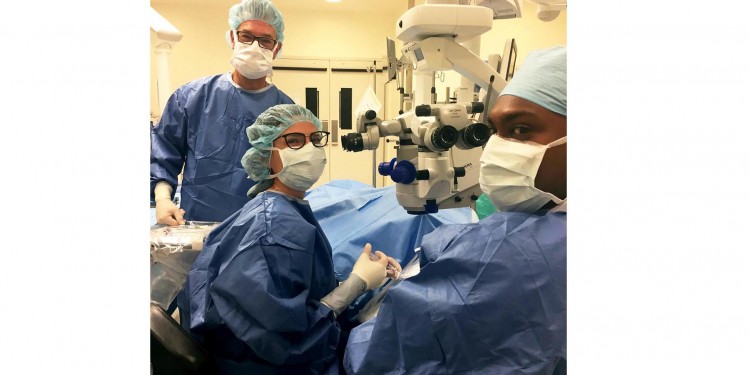 Putting the necessary tools in place for a corneal transplant.

The JGH has begun performing a new type of corneal transplant that improves vision and allows patients to recover more quickly, with less chance of tissue rejection. According to Dr. Johanna Choremis, the ophthalmologist who performed the operation on March 15, the JGH has become the first McGill University-affiliated hospital to offer this procedure.

The transplant treats a condition known as Fuchs’ dystrophy, in which the cornea becomes clouded, because the endothelium—a thin layer of cells on the cornea—is no longer able to effectively remove moisture from the eye.

In the transplant, Dr. Choremis says, the corneal layer known as Descemet’s membrane is replaced with an ultra-thin slice of endothelial tissue that measures only 8 millimetres in diameter and resembles a tiny bit of Saran Wrap. The tissue is rolled up, placed into an injector and put in place through a small incision.

This illustration of a cross-section of the front of the eye shows the difference between the thicker DSAEK corneal graft (left) and the newer, thinner DMEK graft (both indicated in pink).

Dr. Choremis explains that corneal transplants have been performed for more than a century, but only since 2000 have ophthalmologists begun replacing specific portions of the cornea that are diseased. Since less of the cornea is affected by these procedures, recuperation is quicker and the possibility of tissue rejection is decreased.

The DMEK procedure is completed on an out-patient basis and takes only 45 minutes. At the JGH on March 15, it was performed twice—on women in their 70s—by Dr. Choremis, with assistance from Dr. Josh Ramkissoon, an ophthalmological fellow from Trinidad. Dr. Choremis says future procedures will also be performed by Dr. Mahshad Darvish of the JGH Department of Ophthalmology.

Safety and quality of care in CIUSSS facilities is “non-negotiable,” public told