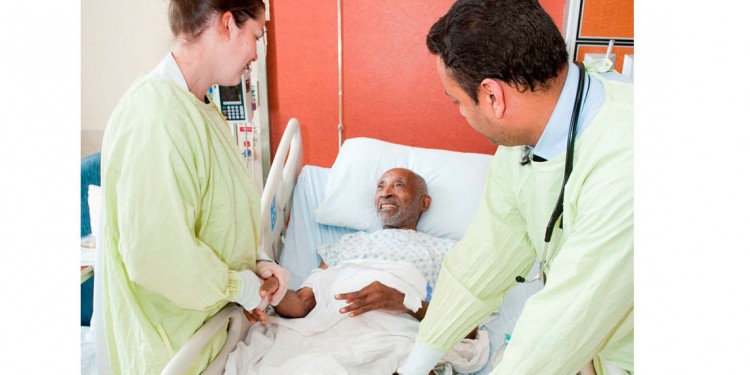 Jean Alfred’s recovery from hip surgery at the JGH is monitored by Dr. John Machado, a general practitioner, and Nurse Clinician Audrey McFetridge.

In a brief that responds to Bill 20, the JGH has commended the Ministry of Health and Social Services for setting the goal of providing Quebecers with broader, faster and easier access to health care, especially at a time when many individuals have no family doctor of their own.

However, the JGH also cautions that Bill 20 “is trying to be a one-size-fits-all solution that could have unintended consequences” for general practitioners who carry out a wide variety of critical tasks in a hospital setting.

Included in the proposed legislation, which was introduced last November, are provisions for general practitioners to take on a minimum number of patients and to see more patients per year, or else be liable to pay financial penalties.

The JGH brief, submitted in March to the Ministry of Health and Social Services, notes that some general practitioners play a crucial role in the hospital by improving the quality of non-surgical care for post-operative JGH patients—especially the elderly and/or those with multiple medical problems—in Orthopedics, as well as general care in Neurology/Neurosurgery and Oncology. Among elderly JGH patients who have had orthopedic surgery, this has substantially reduced the mortality rate and the number of transfers to Intensive Care.

The brief says that if Bill 20 is enacted in its present form, “these essential and high value-added arrangements could be substantially weakened or possibly even eliminated,” because many general practitioners would be required to spend time devoted to other tasks in order to fulfill the Bill’s requirements.

“The evolving role played by these physicians in caring for hospital in-patients needs to be acknowledged and supported,” the brief states. “Their involvement improves the quality of care, is cost-effective, and is consistent with best practices in healthcare institutions across North America. This arrangement deserves to be protected by the government for the benefit of these high-risk patients in hospitals across Quebec.”

Bill 20 also suggests that if some general practitioners are precluded from caring for patients in specialty areas, this role should be filled by specialists from various fields. However, according to the JGH brief, this proposal faces four challenges:

Therefore, the Jewish General Hospital recommends that general practitioners, whether hospital-based or from outside the hospital, should be allowed to continue:

In addition, in order to maximize the benefits that general practitioners can deliver in a hospital setting, and in order to take the next logical step to heighten the effectiveness of Bill 10 (which took effect April 1), the JGH recommends that Bill 20 be amended so as to transform hospital-based physicians from independent entrepreneurs to salaried professionals of their respective CIUSSS, with clearly defined roles and responsibilities, and regular performance evaluations.

Eliminating the deficit while maintaining
the quality of care