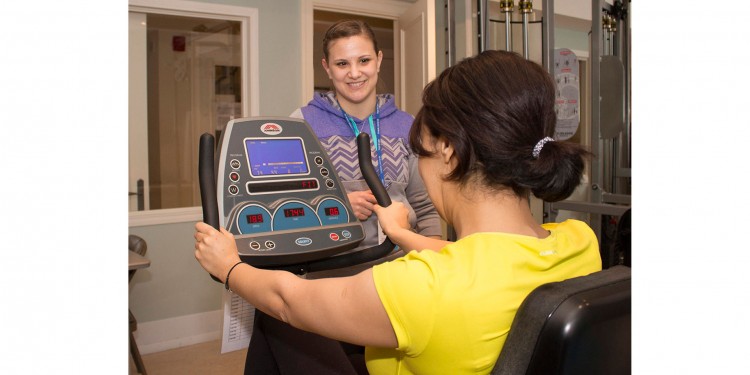 In the gym of the JGH Hope & Cope Wellness Centre, exercise physiologist Lisa Mastroianni guides one of the regular visitors through her workout.

For months, Sheree had been coping well with breast cancer and was on her way back to good health, when suddenly a new challenge loomed: After undergoing chemotherapy treatment, she learned that her bones were showing signs of weakening.

“It was such an awful surprise, but I knew it was something I just had to deal with,” says Sheree, who asked to be identified only by that name. “Hope & Cope was already giving me such amazing support that I was very relieved when they had a suggestion for me.”

That proposal was for her to enroll in one of Hope & Cope’s newest initiatives, the Breast & Bone Health Program, which identifies women who have had breast cancer and are at risk for bone fragility. After a thorough assessment is conducted, a tailored exercise program is designed to help manage this condition. Women also receive nutritional counseling related to enhancing bone health.

Dr. Carmen Loiselle (right) and Garnet Lau meet in the gym of the JGH Hope & Cope Wellness Centre to discuss bone health and recovery from cancer.

In Sheree’s case, screening tests and an assessment by nurse and physiotherapist in the Breast & Bone Health program suggested that her bone density might be low because of her clinical situation and lifestyle. This resulted in a recommendation to the treating physician that her bone density be tested. The bone mineral density test confirmed bone fragility. Subsequently, the team advised her on managing bone health, especially since she would be taking estrogen-lowering medication for breast cancer.

“I’m feeling better every day,” says Sheree, whose diagnosis of breast cancer in April 2015 was followed by chemotherapy in May, surgery in October and radiation therapy in December in the same year.

Sheree had actually begun exercising last fall, as part of Hope & Cope’s general promotion of physical activity to help patients who are recovering from various types of cancer. Her sessions were interrupted when she underwent radiation therapy, but when she resumed exercising in January, physical therapy to strengthen her bones was incorporated into her routine.

“Without the Breast and Bone Health Program, I would never have learned about my risk factors or how being treated for breast cancer affected me,” says Sheree. “It really made me appreciate the team behind me at the Segal Cancer Centre and the way my oncologist connected my care with people at Hope & Cope.”

Since its launch in late 2015, the Breast and Bone Health Program has followed more than 100 women who are mainly in their 50s, but range in age from 29 to 79, says Dr. Carmen Loiselle, Hope & Cope’s Scientific Director and Co-Director of academics in the Segal Cancer Centre at the JGH.

Dr. Loiselle notes that research is also of key importance in determining how and to what extent patients are helped by the program, how healthcare services are used, and whether improvements in bone health may contribute to eventual healthcare cost-savings. Funding for the program through 2017 has been provided by the Quebec Breast Cancer Foundation.

One of the connections between breast cancer and bone health is estrogen, explains Garnet Lau, the program’s Nursing Coordinator, who has been trained in psychosocial oncology care. Under normal conditions, estrogen helps to protect bones by regulating the cycle of bone rebuilding and break-down. However, when estrogen levels are lowered to treat estrogen-positive breast cancer, protection is diminished, leaving bones prone to lower density, fragility and even osteoporosis.

To counteract these effects, Ms. Lau says, patients can perform weight-bearing exercises (such as climbing stairs or brisk walking to activate the bones’ cell-building process), strengthening exercises (including using weights to build up the muscles that are attached to the bones) and balance-agility exercises (such as standing on one foot to improve balance and prevent falls).

“In general, we encourage everyone who is coping or recovering from any sort of cancer to exercise as a way of reducing fatigue and other side-effects of treatment.”

Ms. Lau adds that personalized exercise routines developed by the program’s physiotherapist, Marize Ibrahim, take into account the patient’s age, the type and outcome of cancer treatment, and general physical condition. The multidisciplinary program can also turn for advice from additional healthcare professionals, including oncologists, nurses, nutritionists and occupational therapists.

Some of the participants have joined the program by contacting Hope & Cope directly, whereas many have been referred by their doctor or nurse. Once actively involved, patients can exercise in the gym of the Hope & Cope Wellness Centre (Lou’s House). Expert supervision and guidance are provided in the context of a motivating, welcoming environment by Exercise Coordinator Anouline Sintharaphone, Exercise Physiologist Lisa Mastroianni, and Hope & Cope’s volunteers. Dietitian Kristina Mullahoo is also available to provide advice or to consult about special situations, such as lactose intolerance, vegan diets or religious dietary preferences.

“We try to enroll women as soon as possible after they have been diagnosed,” says Dr. Loiselle, “but we also have participants at all stages of treatment and recovery. “In general, we encourage everyone who is coping or recovering from any sort of cancer to exercise as a way of reducing fatigue and other side-effects of treatment. The days of seeing them as fragile sedentary patients are over.”

More information about the Breast & Bone Health Program is available at 514-340-8222, extension 8658, at glau@jgh.mcgill.ca, or in person in room E-747 on the seventh floor of the Segal Cancer Centre at the Jewish General Hospital.

Grow your way to a healthier you!