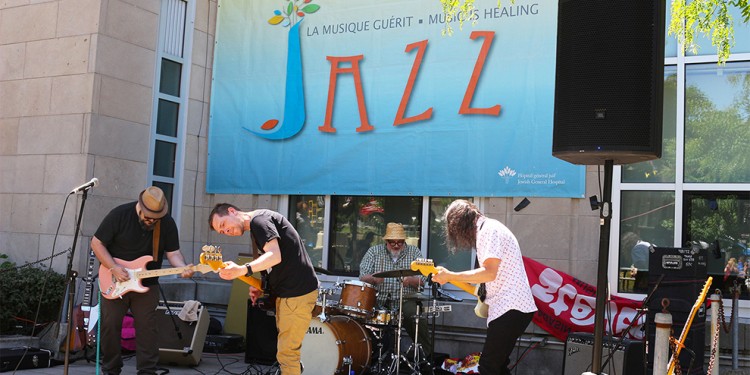 From psychedelic rock to classic jazz, musicians of many genres peppered the lineup of the 19th annual JGH Jazz Festival.

At lunch hour on weekdays for two weeks in June, patients, visitors and staff enjoyed live music by 20 acts in the picnic area at the Côte-des-Neiges entrance or, if rain threatened, in the food court of Pavilion K.

“The festival is a way to relate and give back to the public,” says Samuel Minevich, a JGH Music Therapist and festival co-organizer. “We’re hoping to share the efficacy of the healing power of music.”

Among those on the bill was Dakan, a quartet from various parts of Africa, which performed a mixture of classic Malian repertoire, sprinkling in pop-inspired grooves to modernize the traditional tunes.

The band’s vocalist, Madou Diarra, an orderly at the JGH for 21 years, took to the stage with a donso n’goni, a West African stringed instrument which is played like a guitar, but has a spherical body.

“I’ve been playing this instrument since 1990,” said Mr. Diarra, who was performing at JGH Jazz for the sixth time. “To play it well, you need someone to teach you. So every time I visit my home country of Mali on vacation, my master there gives me classes.”

Dakan has played at the Montreal Jazz Festival and the Festival international nuits d’Afrique, but JGH Jazz is particularly special for Mr. Diarra. “I enjoy playing for my hospital,” he says. “I will do it for as long as I can.”

“Playing for hospital staff, patients and passersby was a fun experience,” said Andrew Joncas, lead guitar player for retro-futuristic surf-rock band Les Surfants Terribles. “It was nice to see the happy and sometimes surprised faces of the people who attended.”

Though it was the band’s first JGH Jazz Festival, Mr. Joncas is no stranger to the hospital. “My father spent several months recovering from surgery in Pavilion K,” he said. “I was able to witness first-hand the expert care he received, as well as the benefits of the music therapy offered by Henri [Oppenheim] and Sam [Minevich].”

Other performers at the festival included Andy Mac, Le No Matter What Band, Drax, and Minevich’s own The Minevich Meshugas.

“There was a really diverse and interesting array of musicians that we felt reflected the diversity of the hospital and its patients,” says Mr. Minevich.

Launched by retired JGH Music Therapist Bryan Highbloom, JGH Jazz will celebrate its 20th year next summer, and Mr. Minevich says something extra-special is planned —but for now, it’s a secret. “It’ll be celebrated in a significant way,” he says, “so stay tuned.”

Keep your digestive tract on track!