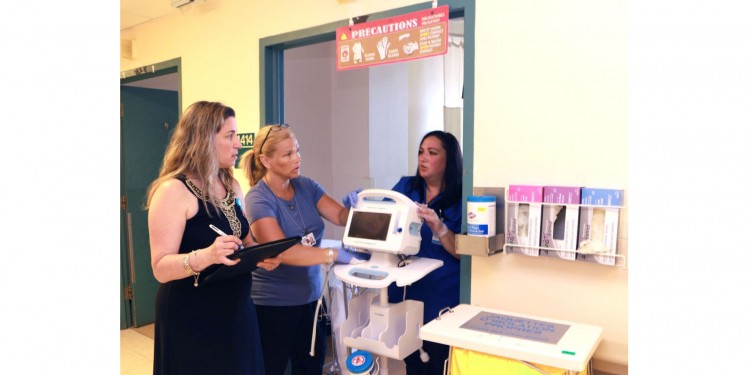 Proper disinfection of a blood-pressure machine is discussed by (from left) Silvana Perna, Coordinator of Infection Prevention and Control, nurse Debra Hyland, and Luisa Neri of Enviro Services. To minimize the spread of infectious microorganisms, a sign of precautionary instructions hangs over the door, clean gloves and disinfectant wipes are on the wall to the right of the door, and clean gowns are available in the receptacle to the right of the door.

A focused commitment to combatting C. difficile at the JGH has led to a steep drop in infection rates, thanks in large part to efforts spearheaded by the Department of Nursing.

Between 2012-2013 and 2014-2015, the rate fell well below the recommended provincial target, an improvement that is believed to have potentially saved approximately 17 lives and contributed to cost savings of more than $1 million.

C. difficile has been a recurring problem since the mid-2000s in hospitals throughout Quebec and elsewhere in North America. When a patient is treated with antibiotics, many benign intestinal bacteria are unintentionally wiped out. C. difficile jumps in to fill this vacancy and, in the course of multiplying, releases a toxin that can sometimes be severe enough to lead to death.

The work of the Department of Nursing has been crucial in achieving these results, Ms. Perna says. Joanne Boileau, the Director of Nursing, along with the department’s Associate Directors, have shown “strong leadership in their commitment to reducing C. difficile infection rates.”

This has motivated nurses throughout the JGH, who come into regular and frequent contact with patients, and are in an ideal position to ensure that other members of staff and visitors observe preventive measures. These include putting on protective clothing and practicing proper hand hygiene on entering and leaving the patient’s room. Their involvement will be crucial in maintaining and reducing the lower infection levels.

Ms. Perna attributed the improvement to a combination of factors, stemming from an interdisciplinary approach that is essential in controlling C.difficile. The measures included:

“We’re delighted with these results, which could not have been achieved without the leadership of Nursing and the cooperation of staff from many departments and units,” Ms. Perna says. “But it’s also important for us not to let our guard down, because we’d really like to see these rates continue to fall even further.”