Can e-cigarettes help smokers butt out? 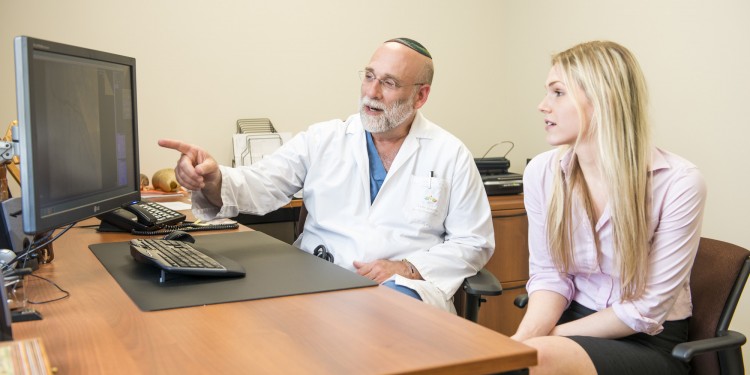 Dr. Mark Eisenberg and research assistant Carolyn Franck have collaborated on a systematic review of existing research into the safety and effectiveness of electronic cigarettes.

Dr. Mark Eisenberg, a researcher at the Centre for Clinical Epidemiology in the Lady Davis Institute at the JGH, has received more than $800,000 to lead a randomized clinical trial to determine whether electronic cigarettes can help smokers kick the habit. The grant from the Canadian Institutes of Health Research will support a comparison between e-cigarettes that deliver nicotine and those that do not.

E-cigarettes mimic the feel and action of smoking, right down to producing water vapour that resembles smoke. Thus, they may be a more satisfying way for smokers to gradually withdraw from their nicotine addiction. A recent survey conducted by the Centers for Disease Control in the United States found that nearly half of smokers who had been motivated to quit within the succeeding six months had tried e-cigarettes.

“We are only beginning to examine the safety issues surrounding e-cigarettes,” says Dr. Eisenberg, Director of the Cardiovascular Health Services Research Group at the JGH and a leader of clinical trials of Zyban and Champix, the two most commonly prescribed smoking cessation medications. “It would be preferable not to smoke at all, but to my mind, e-cigarettes are almost certainly better than regular cigarettes. I think they have the potential to wipe out conventional smoking.”

He notes that with existing methods of smoking cessation—such as nicotine patches or medications that alter how the brain responds to nicotine, as well as behavioural counselling—“significantly less than half of the people who try to stop smoking succeed in quitting in the long term. It’s apparent that there is a need for more effective methods.

“Smoking is a highly social and ritualistic activity, with oral and tactile dimensions that pills and patches can’t duplicate. I’m optimistic that e-cigarettes will prove to be very effective, because they address all dimensions of the smoker’s habit.”

In recent years, anti-smoking efforts have been quite effective, with smoking becoming increasingly difficult in public spaces. However, quitting is very hard, and nearly 1 in 5 Canadian adults continues to smoke. As a result, tobacco-related diseases contribute to the deaths of more than 37,000 Canadians per year, primarily from cancer or cardiovascular-related diseases.