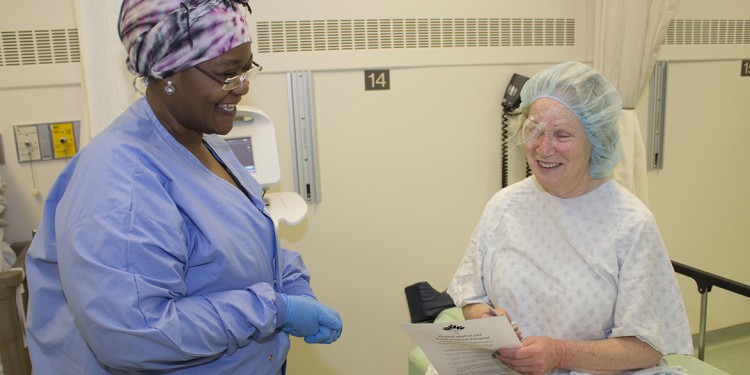 In the recovery room of the Academic Cataract Centre, Claire Lenet receives instructions from Nursing Assistant Francine Mwimbi about the post-surgical care of her right eye.

Patients who were surveyed about their care in the JGH’s Academic Cataract Centre have turned in glowing reviews of their experiences: 100 per cent of them said they were treated with courtesy and respect by the doctors and nurses, while an overwhelming majority strongly agreed that before their cataract surgery, they received all of the necessary information and instructions in easy-to-understand language.

Paula Calestagne, the Patient Experience, Quality and Safety Advisor who handled the survey, says the results are among the best—and quite possibly the very best—for any clinic, service or area that the hospital has ever surveyed.

The Centre, which is used exclusively for straightforward cataract procedures, was launched in January 2016 on the third floor of Pavilion G.

Patients were given questionnaires after their procedures this past December and January, and replies were submitted by just over 55 per cent of them, a relatively high response rate. According to the Patient Experience Survey:

Based on patients’ written comments, attention will also be paid to improving the few elements that drew criticism—for instance, that the Centre is somewhat difficult to find, that chairs with armrests would be helpful for older patients, and that the physical space, though clean, is dingy and not very attractive.

Anna Pevreal, the Associate Director of Nursing for Surgery, who helped to create the Centre, calls the results “really wonderful. Everyone works so well together in a team that’s warm and friendly, like family. Every step in the patient flow and in the workflow has been fine-tuned, so the patients feel secure and comforted.”

“It’s spectacular,” agrees Dr. Leonard Levin, Professor and Chair of Ophthalmology at McGill University, who was instrumental in planning and developing the Centre because of the JGH’s designation as a McGill teaching hospital. “In these kinds of surveys, it’s so rare to see numbers uniformly over 90 per cent—and 100 per cent just doesn’t happen!”

Ms. Pevreal says discussions to plan the Centre began in winter 2014, when she and Dr. Levin met with Dr. Michael Kapusta, JGH Chief of Ophthalmology, and Valérie Vandal, who was Associate Director of Nursing for Surgery at that time.

“Everyone works so well together in a team that’s warm and friendly, like family. Every step in the patient flow and in the workflow has been fine-tuned, so the patients feel secure and comforted.”
Their three-fold objective was to create an area dedicated to cataract surgery; to satisfy the government’s request that straightforward surgical procedures be performed somewhere other than in a full-scale operating room; and to develop a new service whose top priority was maximizing the patient experience and outcomes.

To get a better sense of what patients faced in the old operating rooms, Dr. Levin says he and Ms. Pevreal even spent a day in the role of patients, “seeing where we would come in, where we would change our clothes, and so on. We wanted to know exactly what they went through and exactly what needed to be improved.”

The cataract surgery team was also energized by its leaders, including Dr. Mahshad Darvish, currently the Centre’s Program Director, and Anne Ross, who is now its Head Nurse. Their aim was to give the staff a clear picture of how much better the Academic Cataract Centre would be if it placed the emphasis squarely on meeting patients’ needs.

As well, the new space in Pavilion G was renovated, thanks to a generous donation through the JGH Foundation. Among the improvements was extra seating in the waiting room and in the recovery area for family members, who used to wait in the corridor until the patient was ready to be discharged.

Staff have also benefited from new locker rooms, as well as a lounge and a research room with big, bright windows. “We proceeded on the premise that if we look after our physicians and staff, our patients will also be well looked after,” says Ms. Pevreal.

Now that the Centre is off to a running start, Ms. Pevreal explains that research will be conducted into the outcome of the surgery itself, so that the quality of the care can be raised to an even higher level.

Dr. Levin also notes with pride that all of the Centre’s upgrades have taken place within the public healthcare system, at a time when patients have the option of paying privately for cataract surgery. “There’s a belief that one has to go on a long waiting list for this surgery,” he says. “That’s no longer always the case, and most patients find the waiting time reasonable.”