Celebrating five decades – and more! – of pioneering psychiatric services at the JGH 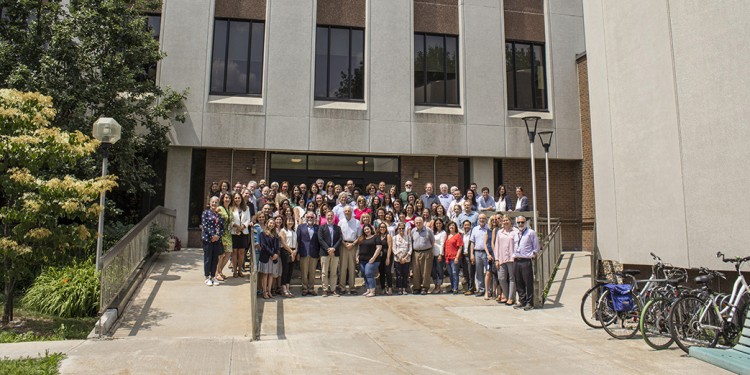 Members of Psychiatry staff gather on the steps of the Institute of Community and Family Psychiatry to commemorate the ICFP’s 50th anniversary.

Institute of Community and Family Psychiatry marks its 50th anniversary

Throughout 2019, as the JGH Department of Psychiatry marks a major, half‑century anniversary, you could convincingly argue that the greeting for this commemoration really ought to be, “Happy 50th … and 67th … and 73rd.”

After all, it was in 1946 (73 years ago) that the hospital opened its first psychiatric service as a branch of the Department of Neurology.

And in 1952 (67 years ago), Psychiatry officially took its place as a stand-alone clinical department at the JGH.

Still, there’s something unique about the launch of the Institute of Community and Family Psychiatry (ICFP) in June 1969. Though conceived in 1946 and born in 1952, the Department can truly be said to have achieved maturity 50 years ago with the opening of a dedicated building of its own.

While in-patients continued to be treated in a ward in the hospital, a great many other activities were shifted to the ICFP. Its distinctive structure was also a pace‑setter for its era, with an ultra-modern architectural design and an amphitheatre with seating for about 150 people.

Dr. Khalil Geagea, a long-serving psychiatrist who joined the department in 1973, began working in the ICFP as a resident in 1969 and says he quickly became well acquainted with the new Institute’s dual purpose: to be the focal point for psychosocial research at the JGH and to serve as “a setting of privacy, quiet and calmness” for sessions of psychoanalysis with clients.

Building on a solid foundation

Construction of the ICFP was possible, in large part, because the Department of Psychiatry had proved it was worthy of such an ambitious endeavour. Under its founding Chief, Dr. Saul Albert, the In-Patient Unit had grown to 20 beds by the mid‑1950s, with additional clinics for child psychiatry, geriatrics, family welfare and drug use by 1959.

The Department also managed to rack up several significant “firsts”. In 1960, Dr. Nathan Epstein, who had become Chief the previous year, championed the fairly new concept of family therapy by establishing the JGH Division of Family and Child Psychiatry, Montreal’s first family therapy program. Shortly thereafter, he built on this achievement by developing Canada’s first training program in family therapy.

By the time Dr. Henry Kravitz became Chief in 1967, the Child Psychiatry Program had also been launched, with Dr. Ronald Feldman as its inaugural Director. Located on the fourth floor of the hospital’s new northeast wing, the program made history as the first in‑patient psychiatric unit for children in a Canadian general hospital.

By the mid-1960s, it was becoming clear that the Department of Psychiatry urgently needed more space to expand its programs (including those that were newly focused on adolescents and suicide) and its growing range of research activities (such as a study of the families of concentration camp survivors).

Funding and designing the dream

Dr. Henry Kravitz, Chief of Psychiatry from 1967 to 1988, near the JGH in a playground for children being treated at the ICFP.

So a new building for Psychiatry was clearly warranted. But where would the funding come from? The benefactor behind the initial grant turned out to be an anonymous donor, who provided $750,000, later complemented by a grant of $1.3 million from the Federal Health Resources Fund.

Even the modernistic design of the ICFP symbolized the department’s forward-looking approach to psychiatry. It originated with Dr. Feldman, who was broadening his understanding of child psychiatry in the 1960s by visiting a number of facilities in the United States.

At one particular institution in Urbana, Illinois, he was greatly impressed by a sleek structure with elongated, vertical windows and other features somewhat reminiscent of Japanese design.

An excited Dr. Feldman returned to Montreal with this concept, which proved to be so popular that elements were also incorporated into the look of the Lady Davis Institute, the hospital’s future research facility, which was then in the planning stages.

The two buildings, a stone’s throw from each other across Légaré Street, were erected around the same time and opened in 1969. “I’m very proud of having left a mark on both of those places,” Dr. Feldman says today.

Patient’s ties to family and friends

What predominated at the ICFP, notes Dr. Geagea, was Dr. Kravitz’s all-encompassing philosophy that the person and the illness are inextricably connected: The only way to understand the illness is by gaining an understanding of the person, not just as an individual, but as part of a complex network of relatives and friends, against a backdrop of neighbourhood, religion, race, ethnicity and other factors.

Today, members of staff describe that era—and the 1970s, in general—as a time of great excitement and intellectual fervour, replete with a thirst for new approaches and a willingness to engage in the unconventional.

For example, Dr. Joel Paris, an expert in personality disorders, who trained at the JGH before joining the Psychiatry Department in 1972, recalls that certain patients and their families routinely used to be interviewed in front of an audience in the amphitheatre of the ICFP. The patient and the family members sat up front with a therapist and answered questions, while dozens of professionals in the audience observed and learned from the presentation.

Dr. Joel Paris, on staff in the Department of Psychiatry since 1972.

“Those sessions could be a little on the hairy side,” says Dr. Paris, “because the family would be right there in full view of all those people. But it had many benefits.”

This interest in new perspectives was why the ICFP held special appeal for social activists like Dr. Daniel Frank. While still a medical student, he devoted a good deal of effort to a new, grass-roots medical clinic in Point Saint-Charles that is still going strong today. Sensing that the JGH had a similar affinity for meeting patients’ needs, Dr. Frank completed his internship at the hospital in 1970 and joined the Psychiatry staff in 1974.

In those early years, Dr. Frank recalls, members of ICFP staff even took an unorthodox attitude to the way they were paid. Salaries were pooled and then evenly divided, so that researchers and teachers, for example, were paid as much as clinicians. “The idea was not to be greedy and not to fight with one another about how much we were earning,” Dr. Frank adds.

Even job titles and credentials seemed to be a lower priority in those days. “People’s professional designations were less important to me than their abilities,” says Dr. Feldman. “People are worth more than their degrees, and their degrees don’t define them. What does define them is their enthusiasm, their talent, their creativity and their ability to work with people.

Amphitheatre in the Institute of Community and Family Psychiatry.

“We were close and we had fun together. And when we disagreed, we found a way to work it out. People’s ideas were respected, and they knew that. It was creative. There was a real buzz.”

This sense of camaraderie was something that Dr. Paris also felt, especially after the ICFP gained a respected reputation as a teaching centre and began attracting upwards of 75 residents a year.

“There was a sense of excitement, with new ideas constantly coming in,” he says. “We were like a little community and we enjoyed one another’s company, instead of fighting for prestige or space. We were like a family.”

This cohesiveness and vigour helped power the ICFP through the succeeding decades, which saw the Department of Psychiatry introducing new services—for instance, a Continuing Care Clinic to treat schizophrenia in 1985—to meet the evolving needs of clients.

Under Dr. Philip Beck, who became Chief in 1988, the Couple and Family Therapy Training Program was granted accreditation as a post-graduate training program by the American Association for Marriage and Family Therapy. In addition, the department oversaw a supervised apartment-living project to foster independence among in-patients who were capable of functioning outside a clinical setting.

After Dr. Michael Bond was appointed Chief in 1999 (a post he held until 2014), the pressing need for better facilities for the Child Psychiatry Program became increasingly apparent. This eventually led to the 2010 launch of the Ruth and Saul Kaplan Pavilion on Côte Sainte-Catherine Road, unifying all child psychiatry services under the umbrella of the JGH Centre for Child Development and Mental Health. Three years later, the first fellowship in family therapy was established in the Child Psychiatry Program.

Today Dr. Karl Looper, who has been Chief since 2014, counts among his successes last year’s opening of the Resource and Information Centre in the lobby of the ICFP, as well as this spring’s inauguration of the Adult Psychiatry Day Treatment Program in a fully refurbished space in Pavilion B.

On the horizon is next year’s opening of an extensively renovated 48‑bed In‑Patient Unit in Pavilion B, as well as Dr. Looper’s vision of upgrading the basement of the ICFP and transforming it into a state-of-the-art research space by 2020 or 2021.

As time passes and the facilities change, so must the staff. Dr. Looper acknowledges that “many psychiatrists are at the age of retirement or in the senior phase of their careers, so turnover is something we’ve got to contend with.

“Over the past five years, we’ve had new members of staff join the department after several departures. And over the next 10 years, I anticipate the same pace of recruitment and replacement. So it’s bound to be an intense but interesting time.”

What remains constant is what Dr. Looper calls the department’s and the ICFP’s “broad-based approach to mental health. It’s very community-oriented and humanistic, in the sense of understanding the social and cultural aspects of a patient’s life. We also pay close attention to the psychological and psychotherapeutic elements, rather than simply relying on medication.

“Among our staff, we’ve retained the cohesion, the sense of community and the collaborative approach. It’s these qualities that have attracted like-minded people who want to be part of a group whose members are carrying a tradition of working very closely together.”

From the archives: Michael Douglas praises JGH expertise in diagnosing his throat cancer