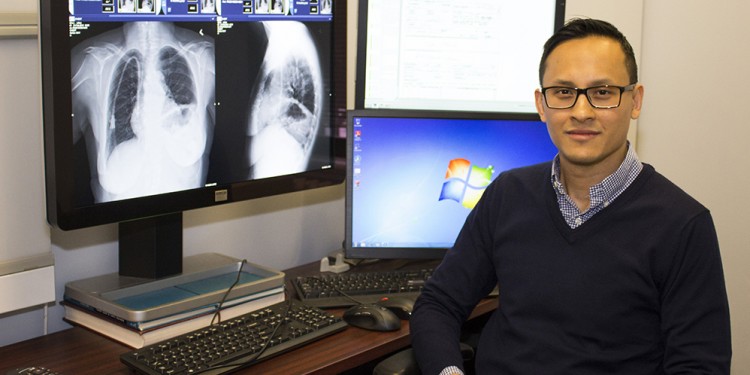 Dr. Huy Le has been appointed the first JGH Chief of the Department of Medical Imaging, having joined the hospital in 2009.

“It’s a big milestone,” he says, adding that he is excited to assume a leadership role that he did not initially expect to be playing.

Dr. Le has taken over from Dr. Mark Levental and Dr. Stephan Probst, who had previously led the Department of Radiology and the Division of Nuclear Medicine, respectively. Medical Imaging will now encompass both areas, with the two former chiefs staying on as members of staff.

“I have a great group of colleagues who have all reaffirmed their support since I became chief,” he said. “It has made the transition so much easier.”

Dr. Le earned his medical degree from McGill University in 2003, where he also completed his residency in diagnostic radiology. In 2008, he attended the University of British Columbia for fellowship training in musculoskeletal imaging.

On returning from his fellowship a year later, he became an Assistant Professor at McGill, winning the Teacher of the Year Award in the university’s Department of Diagnostic Radiology in 2010, and again in 2016.

Throughout his career, Dr. Le’s articles have appeared in numerous publications, including the Journal of Computer Assisted Tomography and the Journal of Vascular and Interventional Radiology.

He first became passionate about imaging after taking an elective course in radiology during his third year of medical school.

“I’m a very visual person,” Dr. Le says. “Imaging is the perfect fit for me, because it combines anatomy, pictures, visual cues and scientific curiosity. I’ve loved it since day one of that course.”