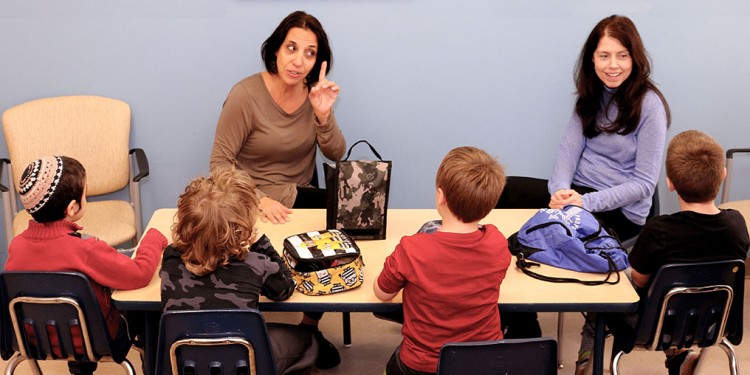 At lunchtime in the JGH Centre for Child Development and Mental Health, Educator Monica Arnaldi (left) and Nurse Clinician Mia Grillakis engage their students in a discussion about the highlights of a story they recently read together.

What made the tantrums so startling was the way they suddenly erupted, in full fury, from a 7-year-old boy of such intelligence and sensitivity.

Maybe it was the frustration of having to cope with his recently diagnosed dyslexia. Perhaps it was anxiety, brought on by new demands in his first years of elementary school.

But one thing was clear: Sean Gallagher’s emotions were slowly slipping beyond his control, and neither he nor his beleaguered parents knew how to keep them in check.

“He was losing so much self-confidence,” recalls Patricia Gallagher (whose real name, like her son’s and husband’s, have been kept confidential). “One night, he said, ‘Mommy, I feel like the stupidest boy in school,’ which just wasn’t true.” Pausing for a moment, her voice tinged with sadness, she adds, “He was stuck in a place where tantrums and anxiety were simply taking over.”

Today, by contrast, 12-year-old Sean smiles easily and speaks of his earlier ordeals without a trace of self‑consciousness. He says he’s looking forward to new experiences in Grade 7 and he’s keen on pursuing his interests, which he describes as “computers, video games and …”—he pauses momentarily, then laughs—“… more computers.”

Sean’s transformation, as he and his parents readily acknowledge, was a direct result of the treatment and counselling that he received during the 2014-2015 school year at the JGH Centre for Child Development and Mental Health.

Although all three still occasionally drop in to say hello to staff at the Ruth and Saul Kaplan Pavilion on Côte Saint-Catherine Road, their visit in late September was an expression of gratitude for the assistance that Sean received—their way of helping to commemorate this year’s 50th anniversary of the JGH Child Psychiatry Program.

Of crucial importance, say Sean’s parents, was the Centre’s unique approach—a treatment strategy that involves not just the child, but a collaboration among parents, teachers, therapists, nurses and allied health professionals—which is the pioneering hallmark of Child Psychiatry at the JGH.

“All of these people were building bridges with the regular school and teachers,” explains Eric Gallagher, Sean’s father. “Of course, we found it very reassuring. And this building made such a difference, with its feeling of familiarity and cheerfulness.”

“We felt like we were part of a real community here,” adds Mrs. Gallagher. “It was remarkable to have an experience where a whole team of professionals knows you and your son so well. And we knew them, too. We never thought of them as a clinical team, but as a family team.”

“It was remarkable to have an experience where a whole team of professionals knows you and your son so well. We never thought of them as a clinical team, but as a family team.”

Mrs. Gallagher is quick to note that Sean’s outbursts were mainly directed at himself and never resulted in injury to others or destruction of property. Early on, before they contacted the JGH, she and Mr. Gallagher hired a professional to act as a liaison between them and Sean’s teachers. This led to a series of helpful meetings that were often expanded to include a social worker.

Nevertheless, by the time Sean neared the end of Grade 3 in 2014, his tantrums remained so troubling that Mr. and Mrs. Gallagher agreed to a referral to the Centre for Child Development and Mental Health. Soon afterward, says Mrs. Gallagher, when they discussed this decision with their friends, “I think they were worried that there would be a stigma attached to a program outside the regular school system. But we were really ready for something that would help our son.”

In August 2014, they met for a preliminary interview with Dr. Jaswant Guzder, the Centre’s former Director, who stepped down this past summer after more than 40 years at the JGH. What particularly impressed them was the way Dr. Guzder involved Sean in the decision-making process and elicited his willingness to improve his behaviour.

“Once things got under way, it was incredible and the teachers did so much,” says Mr. Gallagher. “Dr. Guzder seemed to have a sixth sense about these things and sometimes she’d give you answers before you could even ask the questions.”

Like many of the student-patients, Sean spent four days a week in class and receiving therapy at the Centre; on the fifth day, he returned to his regular school. Throughout this time, not only did he and his parents participate in family counselling, his parents were invited to keep the lines of communication open by contacting Sean’s therapist whenever necessary.

“We were very, very appreciative of being able to talk to someone anytime we wanted to,” says Mrs. Gallagher. Sometimes she and Mr. Gallagher simply received words of encouragement, while on other occasions, they were given specific advice about what to do at home when Sean felt especially stressed.

Today Sean continues to use the breathing exercises and other techniques that he learned at the Centre, whenever he feels his emotions might be trying to get the better of him. For example, he remembers attending a Boy Scout Jamboree, which was “my first time away from home for longer than a week. There were times when I felt a bit homesick, but I was able to calm myself down when I felt that way.”

Pictures by children in the JGH’s Division of Child Psychiatry

The lessons that Sean learned about himself, as well as the growth that he underwent, occurred in an environment that, with its teachers, classrooms and gym, closely resembles a school. However, as Dr. Guzder notes, “we ask people to understand, from the very beginning of the program, that we are not a school—we are a treatment facility. We are coaching children and their families to help give them the strength to master their regular school, which is the goal of treatment.”

The risk, Dr. Guzder explains, is that some children may find the Centre’s environment so reassuring that they might be reluctant to move on. “If you have a protected place with a lot of staff and support all the time, you don’t get practice in using your strengths. This is why children can regress, as might anyone who has a vulnerability.”

This is why it’s so important for the Centre’s 56 children—half under the age of 7, the rest between 8 and 12—to return to their regular schools for one day a week, says Dr. Guzder. For this to happen, close contact between the Centre’s staff and the children’s teachers is essential.

“We are very active in communicating with the child’s school, visiting that school and making plans about what that child is going to need.”

“We are very active in communicating with the child’s school, visiting that school, making plans about what that child is going to need, doing the testing to look at their individual learning needs, and reviewing other kinds of issues, like medication. We’re always fine-tuning what we need to do, in order to help the school and the community accept that child back.”

Although the specially designed facilities of the Ruth and Saul Kaplan Pavilion were opened in 2010, the team approach that Dr. Guzder describes is a direct descendent of the philosophy—both revolutionary and evolutionary—behind the Child Psychiatry Program when it was launched in 1967.

Initially, the JGH’s in-patient service was geared to children who were “too aggressive, too suicidal or too anxious to be treated as out-patients, or those who had severe developmental problems, such as autism,” says Dr. Ronald Feldman, who was the inaugural Director of Child Psychiatry and held that position until 1977.

However, in the earliest stages, Dr. Feldman was also moving into new territory that largely departed from the psychoanalytic approach that was then being used for children with various types of disorders. The JGH was undertaking what Dr. Feldman calls “a dramatic shift” toward a behavioural and academic approach.

This meant involving the parents as co-therapists, who could complement the treatments of the professionals, understand what they were trying to achieve, and continue to work with the child at home.

Child Psychiatry facilities at the JGH before the move in 2010 to the Ruth and Saul Kaplan Pavilion, new home of the Centre for Child Development and Mental Health.

That’s not to say the early days were without their difficulties. Dr. Feldman recalls that before the service was launched, some members of hospital staff were concerned about the presence of disturbed children at the JGH. “I was constantly reassuring them: ‘Don’t worry. We’ll look after it. We have a proper setting. We can manage it. Nothing bad is going to happen.’ And of course,” he says with a laugh, “the first day we admitted a child to the in-patient unit, he pulled the fire alarm.”

Nor were the facilities always ideal. Until 2010, when all of the elements of Child Psychiatry finally came together under one roof, the service was spread over a number of locations including, at various times, the Institute for Community and Family Psychiatry (where adults were treated) and Pavilion A (the former dormitory rooms and classrooms of the JGH School of Nursing).

Rosemary Short, who retired this past summer after 27 years as Head Nurse and a total of 34 years at the JGH, remembers that in Pavilion A, the children naturally needed to let off steam, “but all we had there was the corridor. We didn’t really have a space that was suitable for them.”

The new building, on the other hand, is “our dream come true,” Ms. Short adds, because its modern, airy, light-filled space is so conducive to treatment. This has allowed staff to be even more effective at “making a difference in the lives of these children and their families. Before they came to us, they really didn’t have a voice, and now, for first time, they no longer felt they were alone. At last, they were in contact with other people who were having similar experiences.”

“The new building helps lessen the stigma of coming to a hospital or to Child Psychiatry,” adds Dr. Paola Habib, who became Director of Child Psychiatry this past summer. “Patients and their families are reassured and pleasantly surprised by the setting.”

What impressed Dr. Habib when she joined the JGH in 2014 was “its culturally oriented approach, with a strong emphasis on family therapy and a multidisciplinary approach, as opposed to a medication-prone approach alone. And everyone on our staff—whether healthcare professionals or front-desk staff—has a real passion for their work. It’s more of a vocation than a job.

“At the JGH, I get an especially strong sense that everyone is doing their utmost to address the needs of every single patient. It’s a truly inspiring team!”