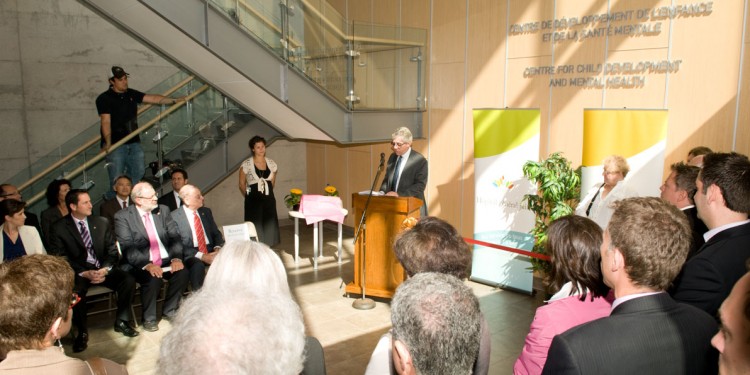 In 2010, JGH Executive Director Hartley Stern speaks at the inauguration of the Ruth and Saul Kaplan Pavilion, new home of the Centre for Child Development and Mental Health.

1967: The Child Psychiatry Program is launched on the fourth floor of Pavilion B. The service, under its founding Director, Dr. Ronald Feldman, includes a seven-bed in‑patient unit and a day hospital for 15 children.

1969: With the closing of the Child Psychiatry In-Patient Unit, the day hospital expands to accommodate 40 to 50 children who are 2 to 12 years old. The multi-disciplinary team also expands to include teachers from the English Protestant School Board.

1970: A satellite day-hospital program is created for 14 children at Bedford School, about 2½ kilometres from the JGH.

Child Psychiatry facilities at the JGH before the move in 2010 to the Ruth and Saul Kaplan Pavilion.

Early ’70s to 1980s: Summer camps in various locations, staffed by nurses and child care workers, are available to patients for one to two weeks a year.

1980s and ’90s: As the program grows, its services are split among several locations. The day hospital moves to the fourth floor of Pavilion A. The Institute for Community and Family Psychiatry accommodates Outpatient Services and the Early Childhood Disorders Service (for nursery and kindergarten pupils). Classes also open at Bedford School, are relocated for 10 years to Bancroft School (at Mount Royal and St. Urbain) and are later moved again to Coronation School (Victoria and Van Horne).

1992: Though perennially burdened with funding problems, the program survives its most serious crisis and avoids closure. Credit goes to Child Psychiatry staff, whose advocacy and action group meets with community leaders and members of the JGH Board and Executive.

2010: Opening of the Ruth and Saul Kaplan Pavilion on Côte Sainte-Catherine Road, unifying all child psychiatry services under the umbrella of the Centre for Child Development and Mental Health.

2013: The first fellowship in family therapy is created in the Child Psychiatry Program.