CIUSSS employees bring warmth to preemies, one stitch at a time 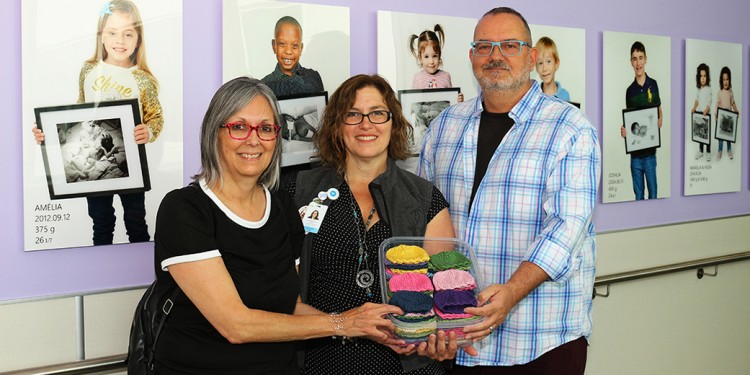 Tiny, colourful knitted hats have become a source of comfort to prematurely born infants and are bringing smiles to parents and families in the JGH Neonatal Intensive Care Unit (NICU), thanks to a gift from employees at CLSC Benny Farm. Nearly 100 hats were donated by the Knitting Bees Club in June, the product of five months of work.

A sampling of the tiny hats for preemies that the Knitting Bees Club made for the JGH Neonatal Intensive Care Unit.

“We’re very grateful for this donation,” says Lyne Charbonneau, Head Nurse of Neonatology at the JGH which, like CLSC Benny Farm, is a member facility of CIUSSS West-Central Montreal. “Whenever we receive hats, parents are always touched by them. The wool in these hats is so soft, but also durable.”

On Wednesdays at lunch hour, the busy Bees—all staff in the CIUSSS Department of Finance—take out their knitting needles and work on personal knitting projects, as well as charitable initiatives.

“For us, the club is about unwinding and engaging in an activity we enjoy,” says André Charbonneau, one of the club’s two founders and Executive Assistant in the Department of Finance. “It’s nice to have a place where we can put our jobs aside, decompress and talk about something we love doing, while doing something for others.”

When the club initially approached the Department of Finance and proposed knitting hats for preemies, colleagues were quick to donate to the project.

“All of a sudden, people’s wallets were opening up,” says Johanne Dugas, the club’s co-founder and Administrative Technician in Payroll Services. “I researched what kind of wool was accepted, we ordered it, and got right to knitting. We thought the hats were something easy that new knitters could do.” They are also working on hats for babies born at full term.

“I think it’ll make the moms and dads smile, because the hats are so colourful,” she says. “I hope parents will keep them and tell their baby, when they’re older, that a special hat was made for them.”

Come fall, the Knitting Bees Club has even bigger benevolent projects planned. Ms. Dugas says the group will work on 30-by-30-centimetre squares, which will be linked into blankets and given to the homeless. Mr. Charbonneau adds that they hope to knit socks for the same cause. For the more advanced knitters in the group, they’ve discussed knitting breast prostheses for breast cancer survivors.

“There are no limits. We are open to all projects and causes,” says Mr. Charbonneau, who adds the group wants to bump up the meet-ups to twice per week in the fall. “The more people who are interested, the more we will have donations to buy wool, and the more ambitious the projects we can create.”

Those interested in making donations to the Knitting Bees Club or joining the club can contact Mr. Charbonneau by email.

Trying to find meaning in a life altered by advanced cancer