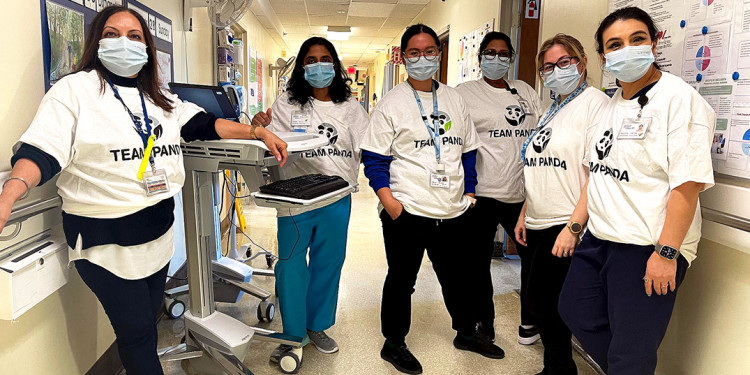 Prescriptions are being filled and medication is being administered with unprecedented speed and accuracy in the facilities of CIUSSS West-Central Montreal, thanks to a digital system that is bringing unity and consistency to pharmacy activities.

Not only is this beneficial for patients, but certain nurses can each devote two more hours per week to bedside care, instead of having to validate medication administration records on paper, says Sharon O’Grady, Rehabilitation Nursing Coordinator for the CIUSSS’s rehabilitation hospitals. 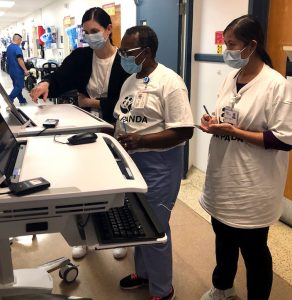 According to Pharmacy Chief Eva Cohen, her department—which is using a tool known as PANDAWebRx—is more extensively digitized for the prescription and administration of medication than its counterparts in any other healthcare network in Quebec.

In 2019, the JGH was the first of the CIUSSS’s facilities to be upgraded, followed by an expansion last year to the CIUSSS’s rehabilitation sites, Julius Richardson Hospital and Catherine Booth Hospital.

Later this year, the use of PANDAWebRx will be broadened to include the CIUSSS’s residential centres—Father-Dowd, Henri-Bradet, Saint-Margaret and Saint-Andrew—as well as Donald Berman Maimonides Geriatric Centre and Donald Berman Jewish Eldercare Centre. “We’re eager to move forward with integrating the other sites,” Ms. Cohen says.

Paperless prescriptions are much more convenient and efficient, she explains, because doctors, nurses, pharmacists, nutritionists and respiratory therapists can work with them on computer terminals and, in some instances, on laptops and medication carts.

Before a prescription is written, prescribers can also review patients’ full medication profiles to be certain the intended drugs and dosages are appropriate and safe for each person. Thanks to digital technology, this can be done within a healthcare unit or elsewhere inside or outside the facility.

This process saves a great deal of time, since doctors no longer need to physically return to the care unit, look through the patient’s file and handwrite a prescription. In the past, paper prescriptions had considerable potential for error, because the physician’s writing might be hard to decipher, and certain handwritten symbols or abbreviations could easily be transposed or misread. 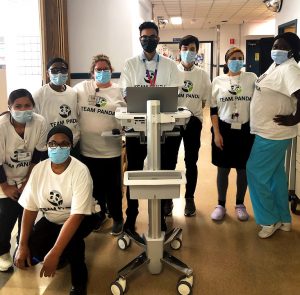 “In terms of nursing, it feels like we’ve finally really stepped into the right century,” says Ms. O’Grady, who also coordinates the CIUSSS’s Transitory Unit for Functional Rehabilitation.

She explains that before PANDAWebRx, nurses at various sites had no choice but to rely on paper to fill orders and to document the administration of medication. This meant they had to go through the time-consuming process of regularly validating and updating the records manually.

“The current change is very significant in terms of nurses being freed up to be at the patients’ bedside, and the care team being able to perform its assessments in a more timely manner,” Ms. O’Grady says.

Ms. Cohen says the use of a standardized system also means there is less likelihood of a communication error. Staff also have better information about those in their care—for instance, whether the patient has any allergies and whether certain drugs should not be prescribed.

She also notes that at the JGH, the documentation of allergies covered all patients in 2021, compared to 19 per cent of patients in 2016. Patients’ adherence to prescriptions also hit 100 per cent last year, up from 79 per cent in 2016.

Arranging the complicated set-up and launch of PANDAWebRx involved a major effort by the IT Department, Ms. Cohen adds. “The success of this project is due to a  multidisciplinary collaboration by physicians and staff in Nursing, Pharmacy and IT, as well as support from the administration.”

Also essential was Marc-André Reid, the Chief Nursing Information Officer, who helped plan the rollout, assisted with training and ensured that no details were overlooked, Ms. O’Grady says. “All of the professionals were open to what this project was intended to achieve, despite the major change in practice that it entailed.”

PANDAWebRx is in line with the CIUSSS’s ongoing practice of taking maximum advantage of digital technology to improve the efficiency and quality of care, while enabling staff to spend more time with patients.

“What this all amounts to,” says Ms. Cohen, “is that digital technology is making the prescribing of medication more rapid, while giving professionals instant access to complete information. Ultimately, it’s the patients who come out ahead.”

Students send their hearts to JGH staff on Valentine’s Day