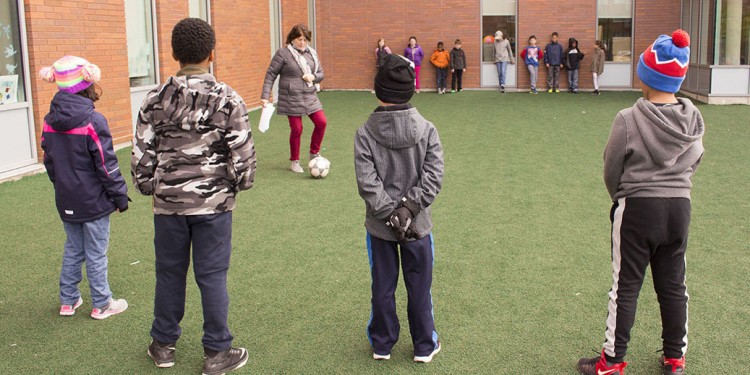 In the playground of the Centre for Child Development and Mental Health, Educator Esther Watts and her students get some exercise.

Half a century ago, in less formal times, a casual invitation was all it took to jump-start what was to become one of Montreal’s—and Canada’s—pioneering facilities in treating children with mental and emotional difficulties.

This fall, as the JGH Child Psychiatry Program commemorates its landmark 50th anniversary, those early years—as well as many recent achievements—are back in the spotlight.

The contrasts between modern times and the old days are considerable, with children now being treated in the airy, light-filled, specially designed Ruth and Saul Kaplan Pavilion, which serves as the home for the JGH Centre for Child Development and Mental Health.

What has not changed, however, are the fundamentals of the Centre’s pace-setting approach to treatment—a strategy that involves not just the child, but a collaboration among parents, teachers, therapists, nurses and allied health professionals—that has become the hallmark of Child Psychiatry at the JGH.

But before this program could come into existence, a preliminary step had to be taken: the creation in 1960 of the JGH Division of Family and Child Psychiatry, this city’s first family therapy program.

Its founder, Dr. Nathan Epstein, had been appointed as Chief of Psychiatry only a year earlier, but he was already eager to make his mark during an era noted for its excitement and innovation in psychiatry in Montreal.

Before long, Dr. Epstein began to realize how much more could be gained by a program that focused primarily on children. So he turned to Dr. Ronald Feldman, a young physician who was then just mid-way through the second year of his residency in psychiatry. What he offered Dr. Feldman was the opportunity to lead the JGH Child Psychiatry Program after completing his residency.

“Nate was a great teacher and I guess he saw some potential in me, but his offer really took me by surprise,” recalls the now-retired Dr. Feldman, who went on to enjoy a long and noteworthy career at the JGH. However, there was a stumbling block: Even though Dr. Feldman had had two years of training in family therapy, he lacked experience with children.

“I explained this to Nate and his answer was, ‘No problem,’” says Dr. Feldman. With a laugh, he adds, “Things were much less formal in those days.” As a solution, Dr. Epstein proposed that Dr. Feldman begin child psychiatry training at Montreal’s Allan Memorial Institute (AMI)—and with that, the pact was sealed. (After the AMI, Dr. Feldman completed his training at the Montreal Children’s Hospital.)

Dr. Nathan Epstein, founder of the JGH Division of Family and Child Psychiatry

“He wanted this to be a comprehensive program, including an in-patient unit, a day hospital and outpatient services. And we both wanted it to have a strong family orientation, because the tendency at the time was to treat children apart from the family, with very little involvement by the family.”

And so, in 1967, the JGH Child Psychiatry Program was launched, with Dr. Feldman as its inaugural Director. Located on the fourth floor of the hospital’s new northeast wing, the program made history by establishing the first children’s in-patient psychiatric unit in a Canadian general hospital.

From the very start, the budget was skimpy, but Dr. Feldman says that he and the other medical staff felt so committed to the program that they all cheerfully donated one day a week pro bono to the hospital—a practice that continued for many years.

It was not long before the program’s family-based approach began to realize its potential and win strong support from clinical leaders—including Dr. Henry Kravitz, who had succeeded Dr. Epstein as Chief of Psychiatry in 1967—and the hospital’s Executive Directors, Dr. William Slatkoff (who served from 1968 to 1975) and Archie Deskin (1975 to 1991).

“Without their support, I alone couldn’t have succeeded in convincing the government to allow us to make necessary changes over the years, while retaining our budget and our staff,” says Dr. Feldman. “And the staff was key, because we had absolutely the top people.”

Among the earliest of those necessary changes—with approval from the government and JGH administrators—was a decision by Dr. Feldman to close the in-patient unit and make more effective use of funding, staff and related resources by expanding the day hospital and the school.

“With that change,” he says, “we were able to more than double the number of children we could look after, while still tending to the needs of children who needed more attention, especially those with autism disorders.”

Sandra Feldman, a psychiatric social worker and family therapist, has been Dr. Feldman’s wife, professional colleague and trusted advisor since those early days. She recalls the atmosphere as being “highly electric, because everyone felt they were part of something special.

“People’s professional designations were less important to me than their abilities. There was a constant sense of evolution, which is why we became hugely attractive as a training centre.”

“To a large degree, that was a result of Ron’s personality. He let people who weren’t necessarily MDs take charge. Nowhere else could that have happened.”

“People’s professional designations were less important to me than their abilities,” notes Dr. Feldman. “There was a constant sense of evolution, which is why we became hugely attractive as a training centre.

“We were also very close and we had fun together. When we disagreed, we found a way to work it out, because people’s ideas were respected, and they knew that. It was a creative time and there was a real buzz.”

In 1977, Dr. Feldman passed the baton to Dr. Martin Solomon. But just before he did so, the Child Psychiatry staff welcomed a young, new recruit, Dr. Jaswant Guzder. She went on to succeed Dr. Solomon as Director in 2004, simultaneously serving as Director of the Childhood Disorders Day Hospital at the JGH, until she stepped down from her position this past summer.

What has most impressed Dr. Guzder over the years, she says, is the way the JGH has established complementary psychiatric services for individuals of all ages. Even though the Child Psychiatry Program sees out-patients only until the age of 15, the hospital’s Youth Service is available to help them until they’re 22.

Rosemary Short, Head Nurse of Child Psychiatry from 1990 to 2017

“Forging links between Child Psychiatry and adult services was a progressive step,” Dr. Guzder says. “This makes sense as a lifespan intervention. We shouldn’t be separating what we know about the vulnerabilities of children from their vulnerabilities over the lifespan. That’s why the family-systems approach that we emphasize here is so valuable.”

It was these sorts of principles and practices that won the loyalty of Rosemary Short, who joined the JGH as a nurse in 1983, moved to the Child Psychiatry Program in 1989 and served as its Head Nurse from 1990 until her retirement this past July.

A great deal was accomplished for countless children in distress, says Ms. Short, and this occurred despite the chronic under-funding and the barely adequate facilities that persisted for many years. A major problem was having to spread various elements of Child Psychiatry throughout the JGH and in two external schools.

Much of the treatment at the JGH took place over several locations, including the fourth floor of Pavilion A which was used until 1972 for the dormitory rooms and classrooms of the JGH School of Nursing.

Child Psychiatry facilities at the JGH before the move in 2010 to the Ruth and Saul Kaplan Pavilion.

A major problem, Ms. Short recalls with a sigh, was the cramped rooms and the shortage of space of any kind. “When you were doing family therapy, you’d have to squeeze five or six people in there besides yourself, so you’re all sitting on top of one another.

“It also meant that the professionals didn’t have their own offices. Four or five people sometimes had to share the same office, and a lot of negotiation had to happen. For instance, staff had to decide when their colleague would see a family and whether they could still manage to make their phone calls. It was constantly a question of, ‘How can I get my job done? I have nowhere to sit and do it.”

“Then there were problems pertaining to confidentiality and disruption of the family therapy sessions. If a staff member forgot his or her coat or other belongings in the shared office, they could not knock on the door and interrupt the session. They had to wait until the session ended.”

Ms. Short also remembers, with considerable pride, how crucial a role the staff played in ongoing fund-raising drives to supplement their shoestring budgets. For example, she says, $500 might be allocated for activities that actually required $30,000 worth of therapeutic interventions and equipment, “so we very quickly had to become more entrepreneurial—from bake sales to rummage sale to movie events.”

On the positive side, these successful projects brought Child Psychiatry to the attention of the JGH Foundation, whose leaders felt more inclined to support a department that had shown such commitment to its patients by stepping forward to raise funds on their own.

“Our attitude was that if the government was thinking of closing us down, we had to make sure there was nothing they could point out that we weren’t good at. And that was our motivation—to constantly be one step ahead.”

As a further benefit, Ms. Short and many of her colleagues soon became more actively involved in a variety of hospital committees outside their own department. “We all became ambassadors of our service—voices constantly talking about where we came from and what our service did.”

This proved invaluable during periodic attempts by the government to cut back on spending by closing down Child Psychiatry. By then, staff had gained so much experience in ensuring their program’s survival that they did not hesitate to advocate on their patients’ behalf.

“Our attitude was that if the government was thinking of closing us down, we had to make sure there was nothing they could point out that we weren’t good at,” Ms. Short says. “And that was our motivation—to constantly be one step ahead.”

Realizing that Child Psychiatry was long overdue for a proper home of its own, Dr. Guzder and Ms. Short began working on a proposal in 2005 that would eventually lead to construction of the Ruth and Saul Kaplan Pavilion on Côte Sainte-Catherine Road.

Launched in 2010, the new building not only provides children with an atmosphere that’s more conducive to treatment, it has enabled the department to have a centralized location for all elements of the Centre for Child Development and Mental Health.

“That was the heart of my legacy here—bringing the department together,” says Dr. Guzder. “It has complemented the really strong consolidation of our research and our family therapy model, which I think is one of the best in the country.”

“We’ve seen the fruition of our work,” agrees Ms. Short, “and we’ve accomplished everything we set out to achieve—and then some.”

Assessing the impact of frailty on outcomes of cardiac surgery