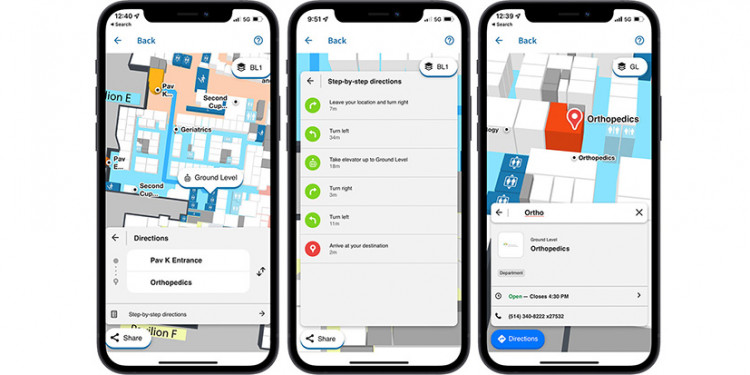 Users can get visual directions (left), text directions (centre) and maps of specific areas in the hospital in a new app from the JGH Users’ Committee. (Click on this or any illustration to enlarge it.)

Introductory screen for the new app from the JGH Users’ Committee.

Solved: How to get clear directions for a lengthy, roundabout and potentially bewildering route through the corridors of the JGH.

Solved: How to figure out where to go for an appointment if no blue-jacketed volunteer is available to act as a guide.

Solved: How to avoid being frustrated by an outdated paper map when searching for a relocated clinic or service.

How? With a new free, bilingual app whose key feature is a navigational tool that helps identify the shortest and simplest path to practically any destination in the JGH.

“A complaint we keep hearing from all kinds of people is, ‘I just can’t understand how to get around this place,’” says Lillian Vineberg, a member of the JGH Users’ Committee, which developed the app as its first digital project.

The new app contains details about the mandate of the JGH Users’ Committee.

Now those difficulties are about to become a thing of the past, says Rebecca Kaufer, the Committee’s Administrative Coordinator. The app for Android phones can be downloaded from the Google store, while the Apple app is now available in the Apple store.

See the app in action in this video.

The jewel in the crown

Although the app contains a number of features, the way-finding tool is the jewel in the crown, whose objective is to get people to their destination easily and with minimal delay.

“We digitized the plans of every floor throughout the hospital,” explains Maor Amar, President of the Committee. “Our basis was the maps that the hospital itself uses to keep track of its infrastructure.”

RealDifferent, a Montreal-based software development company founded by Kyle Fallenbaum, worked with the Users’ Committee to create the app. The company also collaborated with MappedIn of Waterloo, Ontario, to develop the mapping module.

Part of the way-finding problem is size. The JGH covers most of two enormous blocks, stretching west along Côte-Sainte-Catherine Road from Côte-des-Neiges Road (Pavilion A) nearly to Lavoie Street (the Centre for Child Development and Mental Health). It reaches as far north as an office building at Côte-des-Neiges and De La Peltrie, the site of a family medicine clinic.

A further complication is that the hospital is not a single, uniformly designed structure. Rather, its growth is the result of nearly nine decades of add-ons at irregular intervals.

Taken together, these factors make it nearly impossible to rely on logic or intuition to negotiate the numerous twists and turns between, say, the entrance to Pavilion A at Côte-des-Neiges and the Emergency Department in Pavilion K, all the way over on Légaré Street.

Mr. Amar says development of the app falls squarely within the Committee’s mandate, which is “to reduce friction between users and the hospital.”

“Users” usually means “patients”, he explains, but the Committee also deals with the concerns of visitors, caregivers, volunteers, staff and suppliers—“basically, anyone who enters the hospital and interacts with it in some way.”

For the Users’ Committee, this results in a wide range of activities, Ms. Vineberg says. These include helping to resolve complaints, advising individuals about access to their medical records, and explaining where and how to find reliable medical information.

Credit where it’s due

Comments and suggestions about the new app were contributed by all members of the JGH Users’ Committee. The guidance, support and expertise of the following were also particularly valuable:

A variety of features

This is why the app also contains background about the Committee, an updated rundown of users’ rights and responsibilities, and an optional two-question survey, with more features to be added later.

The rights and responsibilities of patients and other healthcare users are outlined in the new app from the JGH Users’ Committee.

In the way-finding tool, a Google algorithm determines the shortest route between any two points, with an option to use elevators, stairs or a combination. Routes can also be plotted to major pavilions that are not physically connected to the main hospital building, such as the Institute of Community and Family Psychiatry.

Paper maps will still be available, Mr. Amar notes, but he expects the demand to decline in favour of the new tool, which can be easily updated twice a year at minimal cost. “This will enable us to use our limited budget to find other ways to enhance the delivery of care.”

What he also appreciates is the support of the JGH and CIUSSS West-Central Montreal, which are eagerly embracing new forms of digital technology, “unlike many organizations that are squeamish about digital innovation. Those others are also weighed down by layers of bureaucracy, which is not something we’ve ever encountered here.”

Previous attempts to improve way-finding date back at least a decade to the paper maps developed by the Committee’s Secretary, Sarah Rubin, and its Vice-President, Lucy Shapiro. In more recent years, both women came to realize how much more could be accomplished with an app and they began advocating for its development.

This proved to be a painstaking process, Mr. Amar says, because it had to happen without burdening the hospital’s digital infrastructure or its IT resources.

Users of the new app from the JGH Users’ Committee are invited to answer an optional two-question survey.

“We also had to respect the rules of privacy and confidentiality,” Ms. Vineberg adds. “The app was designed to make sure we never collect information about anyone or about how the app is used.”

The only exception is the survey, which can be completed anonymously, but allows users to voluntarily submit some details about themselves.

However, this doesn’t mean the job is done. On the agenda for the future:

“Version 1.0 is just the start,” Mr. Amar says. “We plan to incorporate upgrades that are based on the feedback we receive, because listening to people is fundamental to what the Users’ Committee does.

“The whole idea of building a digital platform is to keep improving it. That’s especially true in a constantly changing environment, which has always been one of the main characteristics of our hospital.”