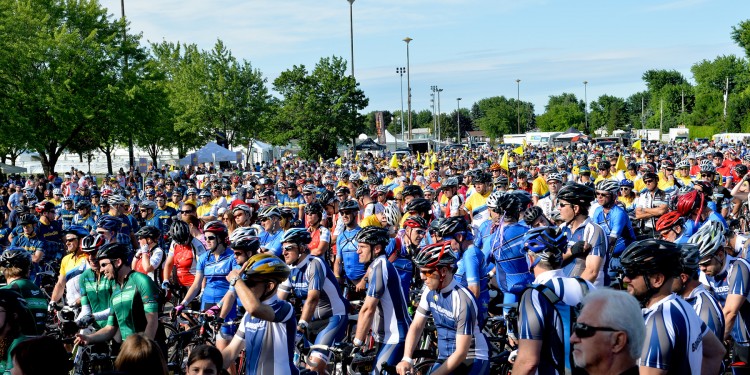 A sea of cyclists waits in anticipation to begin the cross-country trek in the 2014 Enbridge Ride to Conquer Cancer.

The big wheels kept on turning in the Enbridge Ride to Conquer Cancer on July 5 and 6, as 1,468 cyclists and over 350 crew members came together from across the province to raise $5.3 million to fund cancer research, treatment and prevention. By the close of the 230-kilometre trek across southern Quebec, the determined participants had pushed the Ride’s six-year grand total to more than $37 million.

At a quiet, lake-side spot in the country, half a dozen cyclists take a pause from their ride to enjoy a morale-boosting moment.

Organized by the Jewish General Hospital Foundation, this event for all Quebecers reconfirmed the strong support that the JGH has received in caring for patients from across Montreal and Quebec. The event also typified the partnerships that the JGH has developed with healthcare institutions across the province, with proceeds supporting not just the Segal Cancer Centre at the JGH, but the University of Quebec Hospital Centre Foundation and the Trois-Rivières Regional Hospital Centre Foundation.

David Graham, one of this year’s cyclists, is a Floridian who makes the trek to Canada each year in the hope that his participation will bring researchers closer to finding a cure. “In 1988, I was diagnosed with a malignant melanoma that threatened my life,” he says, “and I’m alive and well today because of research into that type of cancer. Over the years I’ve seen a good number of charity events, but never one this big, or as well organized, that combined my love of cycling and fundraising.”

It was during a meeting several years ago that the Ride was mentioned by Marc Parent, the President and CEO of CAE, where Mr. Graham has worked for 15 years. In an instant, he knew he wanted to participate. “As a Florida employee of a Montreal-based company, I’m rarely able to get involved in the company team. But this was my chance! I can’t be part of all of the team training, but it brings me closer to my colleagues and that’s one of the best parts of the event.”

Since his recovery, Mr. Graham has overcome physical and geographical boundaries to complete the Ride. Having used a recumbent bicycle after head and neck surgery weakened part of his body, he recently began training with a standard bicycle. This enabled him to push himself and strengthen his neck in order to complete the challenging two-day ride.

“When I started raising funds and training, I was struck by how many people have a connection to cancer,” Mr. Graham says, “I was motivated to keep going. Not only do I get to do something I love, but I feel I’m giving back to an important cause.”

Though the mornings of the Ride began on the chilly side, the days soon warmed up, with especially good conditions on the sunny, breezy Saturday. Despite showers at the start and finish on Sunday, most of the day was comfortably cloudy and dry. The high-spirited participants left Repentigny on Saturday morning and spent the night in camp in Trois‑Rivières, where they enjoyed hot meals and entertainment. On Sunday, they arrived at the finish line in Saint-Augustin-de-Desmaures, just outside Quebec City, to cheers of excited relatives, friends and supporters.

For information on how you can be part of the 2015 Enbridge Ride to Conquer Cancer or to register for the event, please visit www.conquercancer.ca or call 1-866-996-8356.

Is your fitness routine boring? Then go exploring!

Eight is great for cyclists in anti-cancer ride