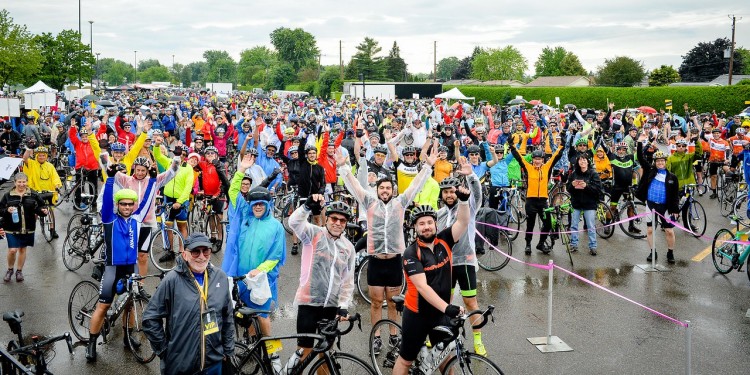 The Enbridge Ride to Conquer Cancer gets off to a wet but enthusiastic start.

The JGH team is eager to hit the road in the Enbridge Ride to Conquer Cancer.

Relieved but elated after a demanding, 200-kilometre ride from Montreal to Quebec City, 1,100 cyclists in the 9th annual Enbridge Ride to Conquer Cancer crossed the finish line in July, having raised $4.1 million for the JGH and its partners across Quebec.

This brings the event’s multi-year total to more than $51 million. Proceeds from the Ride on July 8 and 9—Quebec’s largest multi-day cycling fund-raising event—will support a wide range of vital programs in cancer research, treatment, care and prevention.

Pausing for a morale-boosting cheer on the road in the Enbridge Ride to Conquer Cancer.

Among the enthusiastic participants was Sylvain Gagnon, who returned for his fourth Ride, after being diagnosed in 2012 with stage IV metastatic melanoma. “I underwent five surgeries, radiosurgery, chemotherapy and immunotherapy, all through the Segal Cancer Centre at the Jewish General Hospital,” he said.

“I am proud to be riding on Team Ulterïa in support of the world-leading centre that saved my life. Completing the Ride is an experience unlike any other, and continuing to cross the finish line as a cancer survivor has become a highlight for me every year.”

An emotional moment in the Enbridge Ride to Conquer Cancer.

“This event is about camaraderie and perseverance,” said Myer Bick, President and CEO of the JGH Foundation. “With ongoing support from the Ride, the Jewish General Hospital will continue to make breakthroughs in cancer research, and it will continue to improve how a patient lives with cancer.