Decades of success confirm the superiority of dental implants 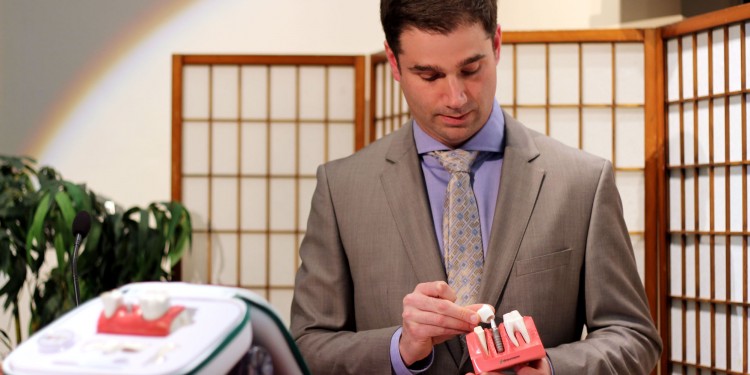 At his JGH Mini-Med School presentation, Dr. Allan Lisbona used a plastic model to demonstrate how an artificial tooth fits over a titanium screw that has been implanted into the jaw.

Nearly half a century since they were first used, dental implants remain the most reliable and longest-lasting way to replace an extracted or diseased tooth, Dr. Allan Lisbona told the audience at the 12th annual JGH Mini-Med School.

Dr. Lisbona, JGH Director of Oral and Maxillofacial Surgery, said implants almost always last a lifetime, because once the titanium screw (which holds the artificial tooth) is implanted, it forms a strong bond with the jaw as the bone heals. This makes it superior to bridges or dentures, which can move unexpectedly or contribute to discomfort, sores or infection.

This past spring, he was among the Mini-Med speakers who explored on the artistry, science and ethical dilemmas behind the latest surgical innovations. As always, remarks by the JGH experts were geared to a general audience, whose members received diplomas and the honourary title of “mock‑tor” at the end of the series.

Dr. Lisbona also noted that there is no age limit for dental implants and that he himself has placed them in patients as old as 98. However, he added, there is a higher failure risk for smokers, individuals with poorly controlled diabetes, and those who require long-term steroid use for medical reasons.

At the Mini-Med School’s final session, Cecile Klein celebrates her 107th birthday with a cake presented by Marisa Rodi, Events Coordinator in the JGH Department of Public Affairs and Communications. Mrs. Klein has attended every Mini-Med series since the program debuted in 2003.

Some other Mini-Med highlights

Dr. Shannon Fraser, JGH Chief of General Surgery, focused on various types of hernias which, she said, must be repaired surgically because they can’t heal on their own. She explained that hernias occur when tissue inside the body tears, allowing organs—for instance, the stomach, diaphragm or intestines—to shift out of position. Surgery—often the minimally invasive type—enables a piece of flexible plastic mesh to be inserted to keep everything in place.

Dr. Marylise Boutros, of the JGH Division of Colorectal Surgery, said extensive experience has confirmed the value of minimally invasive laparoscopic surgery (inserting tiny instruments through the abdominal wall) in a wide variety of patients. For example, it can be performed on patients of any age, and even though it takes longer to operate on obese patients (who have additional, heavier tissue), the reduced scarring and quicker recovery make the technique worthwhile.

Lucie Wade, JGH Clinical Ethicist, explained that surgery can raise particularly difficult questions, since the techniques and technology evolve so quickly. For example, she said, controversy exists over whether plastic surgery should be performed on children with Down syndrome. Similarly, an inner-ear implant can improve hearing in a deaf person, but many people believe it is unethical to alter the condition of those who were born deaf.

Salvatore Di Maio, a cerebral vascular and skull base neurosurgeon, and Dr. Marc Tewfik, a rhinologist and endoscopic skull base surgeon, said they gain access to tumours of the brain and pituitary gland by inserting tiny instruments (including a fibre-optic camera and light source) into the nostrils and through the nasal cavities. Since the skull is not opened in this procedure, they reach their target more safely and easily, while reducing complications and recovery time for the patient.