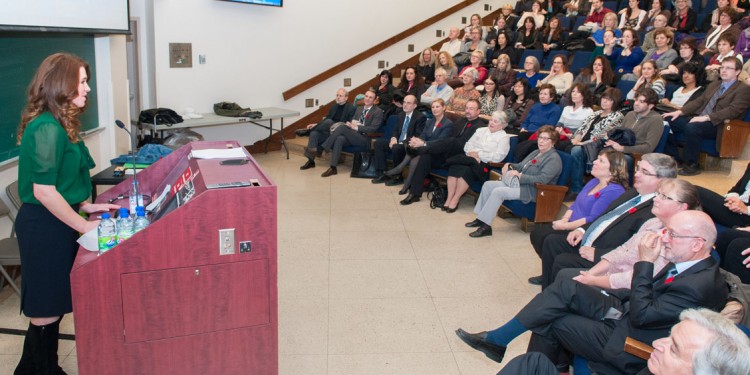 Clara Hughes addresses a packed audience in the Block Amphitheatre.

With her charismatic smile and passionate demeanour, former Canadian Olympian Clara Hughes praised the JGH for the openness of staff and administrators in confronting the stigma around mental health, while urging them to “take the opportunity to shift and save lives.”

Clara Hughes is welcomed to the JGH by Dr. Daniel Frank (left) and Dr. Michael Bond of the Department of Psychiatry.

Ms. Hughes reminded the audience that society is nowhere near where it needs to be in the area of mental health. “What can we do to change that? Speak out, because a whisper becomes a collective roar!”

Speaking on Nov. 10 at the JGH Department of Psychiatry’s Robert Utting/Leonard Ellen Memorial Conference, Ms. Hughes focused on her own struggle with mental illness and depression in competitive sport, notably in speed skating and cycling.

The talk by the six-time Olympic medalist and mental-health spokesperson for Right to Play and the Bell Let’s Talk initiative drew nearly 300 people, most in the Block Amphitheatre and the rest watching a live video feed in the JGH Institute of Community and Family Psychiatry.

Dr. Daniel Frank and Dr. Michael Bond of the Department of Psychiatry also presented her with the 2014 Douglas Utting Medal, awarded each year to a Canadian who has made a significant contribution to the study, understanding or treatment of depressive disorders.

“The Jewish General Hospital was delighted to have Ms. Hughes speak about the importance of destigmatizing mental illness,” says Dr. Lawrence Rosenberg, JGH Executive Director. “In enhancing the patient experience, the JGH strongly believes in raising awareness about illnesses of all sorts, so that proper care can be provided in an atmosphere of openness and clarity among patients, their relatives and members of staff. Ms. Hughes has played a major role in helping us to achieve this goal.”

Special thanks from grateful teens
to Teenage Health Unit