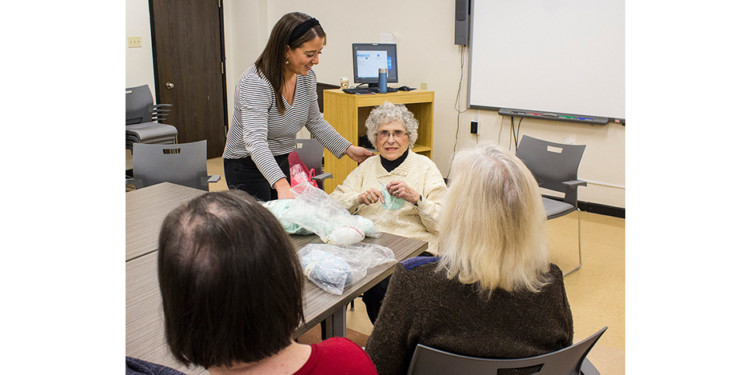 As a veteran volunteer in the psychosocial group at the Institute of Community and Family Psychiatry, 96-year-old Naomi Weiss (centre)—the oldest volunteer at the JGH—makes good use of her knitting skills to instruct and help members of the group. The group is led by Occupational Therapist Allana Goodman (standing).

In 1986, Naomi Weiss found herself at a crossroads. A year earlier, her husband had suddenly died, barely a month into his retirement. And now, the time had come to decide where she was headed next.

“I just couldn’t see myself doing what all of my friends were doing—going to coffeehouses for lunch and… and that’s it!” Shaking her head slowly, Mrs. Weiss sighs. “No,” she says at last, “that wasn’t my life.”

What was her life, she came to realize, was a desire to give of herself for the well-being of others—an impulse that had emerged in the type of volunteering that she diligently pursued as teenager and a young woman.

Today, more than 33 years after approaching the Department of Volunteer Services at the JGH, Mrs. Weiss has the distinction of being not only one of the hospital’s longest serving volunteers, but, at the age of 96, its oldest.

“I love to be with people and do things for them,” she says, following a two-hour psychosocial session for elderly, former psychiatric patients at the Institute of Community and Family Psychiatry.

The weekly group is led by Occupational Therapist Allana Goodman, but it’s Mrs. Weiss who “oils the gears” by arriving early to unlock the door, chat with the participants and put them at ease, prepare and distribute coffee and tea, and keep track of the crafts supplies.

Joanne Laing, Chief of Volunteer Services, calls Naomi Weiss’ decades of service “a remarkable achievement in improving the lives of others.”

During the session itself, Mrs. Weiss joins in whenever appropriate and practical—notably, by using her considerable skills at knitting. After members of the group have knitted an assortment of pieces and patches, Mrs. Weiss first joins these items together to form small scarves, caps and other articles. Then she adds some finishing touches before the items are sent as a donation to the newborns in the Neonatal Intensive Care Unit.

Admittedly, this effort does take a physical toll on Mrs. Weiss, sometimes leaving her quite tired by the end of the afternoon. She gets around with the aid of a walker, and she travels by adapted transport between the hospital and the home she shares with her daughter, Rachel.

Even so, she says, the pleasure that she derives from volunteering is so great that six years ago, it gave her the determination to fight back after experiencing a near-simultaneous stroke and heart attack. (That attack was her second.)

“On top of everything else she does,” Ms. Goodman says, “Naomi provides the people in our group with insight into her life-experience, which is so valuable to them.

“Our patients often say they feel old, but I think that when they see someone who’s 96 and is so bright and capable and eager to give back, it shows that age is really just a number, and that you can do almost anything if you put your mind to it. Naomi is the most beautiful example of aging that I know of.” 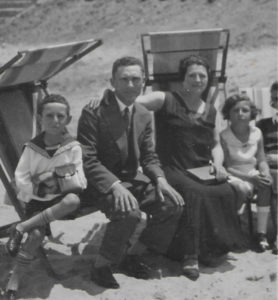 Naomi Weiss (right) on the beach in Tel Aviv in the late 1920s, with her brother Zvi (left) and her parents, Jacob and Rachel Tobiasz.

Born in Poland in 1923, little Naomi arrived in Palestine at the age of six months with her parents. Over time, she saw the land transformed into the State of Israel, where she married and became the mother of two, before moving with her family to Montreal in 1959.

As a teenager in Tel Aviv, she became a dedicated volunteer, usually heading to the local hospital at the end of the school day. “If there were old people who needed help, I combed their hair and I helped them with their lunch,” Mrs. Weiss recalls. “And if there were children, I wiped their noses and I played with them.

“I never went straight home. Anytime I didn’t show up at home, they knew why. ‘Where’s Naomi?’ ‘She went to the hospital.’” Perfectly comfortable in a healthcare setting, she went on to volunteer as an ambulance attendant in Magen David Adom, an emergency medical service in Israel, similar to the Red Cross.

After arriving in Canada, Mrs. Weiss used her disciplined approach to strongly encourage her children to excel at school. This prompted Rachel and her younger brother, Samuel, to jokingly nickname their mother “The Commander General of the Israeli Army.”

“She  kept an eye on us to make sure we didn’t watch too much TV,” Rachel remembers, “and she sat with us, every single day, while we did our French and math and geography homework. Whatever we achieved, it was because of my mother.”

Rachel went on to earn a Ph.D. and conduct epidemiological research, while Samuel is a Professor in the Hotchkiss Brain Institute at the University of Calgary. 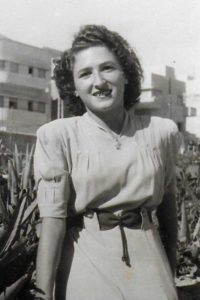 Naomi Weiss as a young woman in Israel.

Mrs. Weiss also contributed to the family in other ways. Since she’d always had a good head for figures, she became the bookkeeper for her father, Jacob David Tobiasz, who had arrived in Montreal before the Weiss family, and was making a living as a textile engineer. She did the same for her husband, Israel Weiss, keeping the books for his appliance repair business.

After Mr. Weiss died and Mrs. Weiss finally set her sights on volunteering, she figured that her experience with Magen David Adom would make her a natural fit for the Emergency Department at the JGH.

However, she was asked to work in Psychiatry which, at the time, had a greater need for volunteers—and thus began a relationship of more than 33 years.

“It’s like a family, you know,” says Mrs. Weiss, referring to the psychosocial group, “and everyone loves it here. They like to tell stories and talk about themselves—and talking is important, because it’s something they need to do. They’re lonely and have such problems.”

Joanne Laing, Chief of Volunteer, Therapeutic Recreation and Chaplaincy Services at the JGH, calls Mrs. Weiss’ decades of service “a remarkable achievement in improving the lives of others. It attests to our incredible volunteer culture at the JGH, where we cherish the work that everybody does and the incredible contribution that they make.”

A similar sense of pride runs through the words of Rachel Weiss, who nevertheless acknowledges her mother’s significant physical limitations. “Even though her mind is active and vital, her body is slowly letting her down,” she says.

“But she maintains a fierce loyalty to her group at the hospital and it pushes her beyond her physical challenges.”

All of which raises the sensitive but inevitable question of how much longer Mrs. Weiss can continue to give of herself.

“Naomi and I had a talk last year,” says Allana Goodman, sitting alongside Mrs. Weiss, “and she asked, ‘Do you really still need me?’ So I said, ‘Naomi, I can’t run this without you.’”

Ms. Goodman pauses and, smiling, turns to Mrs. Weiss. “And do you remember what I told you about when you could retire?”