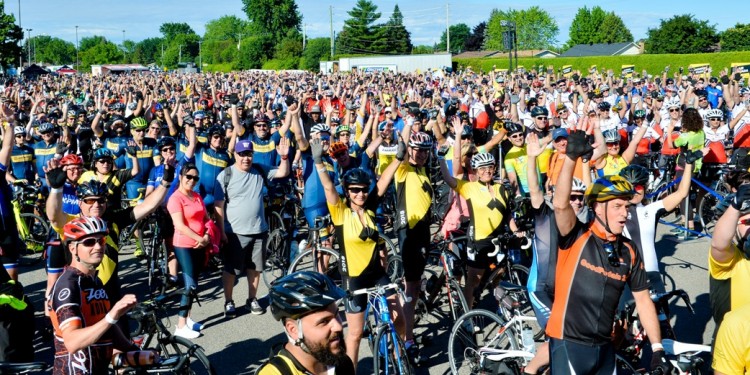 Cheerful cyclists are dressed in commemorative shirts marking the 10th anniversary of the Enbridge Ride to Conquer Cancer.

Ten remarkable years after its debut, the Enbridge Ride to Conquer Cancer reached its landmark anniversary on July 7 and 8 amid cheers, tears, embraces and a legion of exhausted smiles.

By the time the 1,308 dogged participants crossed the finish line in Quebec’s largest multi-day fund-raising event for cyclists, they had raised more than $4.8 million to help the Segal Cancer Centre at the JGH and its partners across Quebec. The funds are essential in providing support for vital cancer research, treatment, care and prevention.

Combined with the proceeds of the previous nine years, the Ride has brought in nearly $56 million, thanks to the efforts of a total of 15,351 participants. In this year’s event, the cyclists enjoyed hot, sunny weather as they covered 200 kilometres in two stages, setting off from Montreal on Saturday and arriving on Sunday in Augustin de Desmaures.

On the road in a tough but rewarding weekend of cycling in the Enbridge Ride to Conquer Cancer.

“These numbers are impressive and, clearly, so are the results,” said Myer Bick, President and CEO of the JGH Foundation. “Funds raised through the Ride support our world-leading doctors, researchers and scientists. They, in turn, develop new technologies in the areas of molecular diagnostics, functional imaging, biomarkers, molecular target discovery and validation, and advance targeted radiation therapy.

“Thanks to funding from the Ride we are able to put in place the most promising cancer research programs and treatments. We are making great strides towards conquering cancer.”