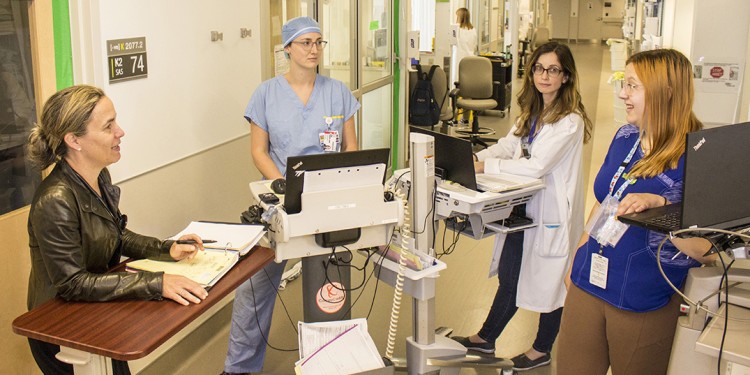 At a team meeting to discuss medication in the Cardiovascular Intensive Care Unit, Nurse Kamylle Martin (right) works at her medication cart, while conferring with (from right) Pharmacist Helen Mantzanis and medical student Ellen Dunbar-Lavoie (each using a work-station on wheels), and Dr. Judith Therrien.

Prescription medication is reaching hospitalized patients at the JGH more quickly than ever, thanks to a digital ordering system that has been implemented more extensively than in any Quebec healthcare facility with a comparable patient population.

While pharmacy departments in many hospitals (including the JGH) went digital a number of years ago, the JGH has now distinguished itself by introducing paperless prescriptions that doctors, nurses, pharmacists and nutritionists can complete on computer terminals—and sometimes on hand-held devices—throughout the hospital.

In the medication room of the Cardiovascular Intensive Care Unit, Pharmacist Helen Mantzanis (right) discusses the properties of a drug with Nurse Clinician Keli Orjuela.

Before a prescription is written, prescribers can also review a patient’s full medication profile to be certain that the intended drug and dosage are appropriate and safe for that particular patient. Thanks to the digital technology, this can be done in a healthcare unit or elsewhere inside or outside the hospital.

As a result, a great deal of time is saved, since a doctor no longer needs to physically return to the care unit, look through the patient’s file, and then hand-write a paper prescription, which itself has considerable potential for error.

In addition, when a rolling, computer-equipped work-station is taken on rounds, doctors can save precious time by prescribing at the bedside.

“This is where we’ve really become innovative, and now we’re spear-heading it for the province,” says Eva Cohen, Chief of the Pharmacy Department for CIUSSS West-Central Montreal.

According to Ms. Cohen, the digital system, known as GESPHARxLite, has been implemented by a team that includes representatives from the Departments of Professional Services, Pharmacy, Nursing and IT, and physicians.

Its components (the Computerized Physician Order Entry and the Electronic Medication Administration Record) allow medication to be prescribed electronically, as well as providing fast and easy access to the patients’ medication records.

Pre-established medication order sets (protocols) have been created to make the prescribing process more standardized and easier to use, while ensuring the presence of an added layer of safety in patient care.

“Digital technology is making the prescribing of medication more rapid, while giving professionals instant access to complete information. It improves communication, as well as decreasing potential for error.”

No longer do paper prescriptions have to be picked up by a Pharmacy technician and transported to the Pharmacy Department to be filled. Instead, says Ms. Cohen, “we instantaneously see the prescription on our screens.

“We have a turnaround time under two hours from the time the prescription is entered to the time of validation. Suggestions, recommendations or other medication-related adjustments are also communicated back to the prescriber electronically.”

Nurses, who used to manually transcribe all prescriptions into a paper Medication Administration Record (a log of when and to whom medication must be administered), now have instant access to the electronic record at the moment when the medication is prescribed.

Not only does this save time, but it eliminates potential errors in transcription, as well as ensuring that the list of medications that need to be administered is updated in real time.

The system was introduced in November 2015, and as of May 2019, it was deployed in 96 per cent of the JGH’s in-patient units, including Cardiology, Intensive Care, Internal Medicine, Surgical Services, Neurology and Palliative Care. Coming later this year will be Neonatology, the final in-patient unit to be connected.

In the planning stages is implementation of Computerized Physician Order Entry in the outpatient units, including the Emergency Department, Hemodialysis, Radiation Oncology, the Pre-Operative Surgical Screening Unit, Endoscopy and the Medical Day Hospital. Plans call for eventual implementation throughout the CIUSSS.

At the moment, 62 per cent of all prescriptions at the JGH, including outpatient areas and clinics, are entered electronically. In an audit completed in August by 218 members of JGH staff, 93 per cent of nurses, 91 per cent of physicians and 95 per cent of pharmacists agreed that “based on their experience, they prefer the electronic prescriber system over the hand-written prescriptions,” says Ms. Cohen.

Among other advantages cited by Ms. Cohen:

Medication reconciliation, the process of ensuring the patient’s smooth transition through a trajectory of care, will soon be digital, too. An electronic module will provide professionals with information about the drugs that a patient had been taking at home and those that were prescribed during hospitalization.

This will allow medication to be prescribed when the patient is discharged, with the assurance that the next healthcare professional will be aware of all of the changes that were made to the patient’s therapy during hospitalization.

“What this all amounts to,” says Ms. Cohen, “is that digital technology is making the prescribing of medication more rapid, while giving professionals instant access to complete information. It also improves communication at all points of care, as well as decreasing potential for error.”

From the archives: Building the JGH, brick by brick