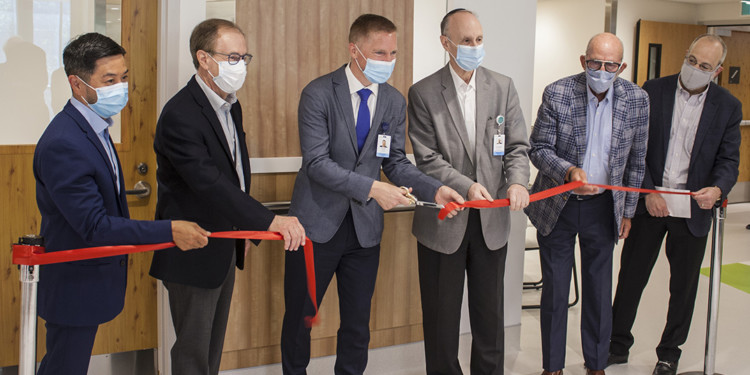 With faces covered to prevent the spread of COVID-19, leaders cut the ribbon to officially open the JGH’s Carole and Andrew Harper Psychiatry Inpatient Unit. From left: Tung Tran, Director of the Mental Health and Addition Program of CIUSSS West-Central Montreal; Larry Sidel, Executive Vice-President of the JGH Foundation; Dr. Karl Looper, JGH Chief of Psychiatry; Dr. Lawrence Rosenberg, President and CEO of the CIUSSS; Edward Wiltzer, Past Chairman of the Board of the JGH Foundation; and Bram Freedman, President and CEO of the Foundation.

Hospitalized psychiatry patients at the JGH are now receiving treatment in newly renovated facilities that are brighter, airier and more welcoming, with much more space, beds in private rooms, the latest amenities and a modern design that emphasizes privacy and healing.

“Our patients deserve to be cared for in a setting that promotes dignity, autonomy and personal recovery,” Dr. Karl Looper, JGH Chief of Psychiatry, told those who had gathered on July 6 to inaugurate the Carole and Andrew Harper Psychiatry Inpatient Unit on the third floor of Pavilion B. 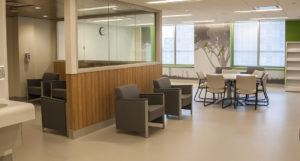 Dr. Looper said that during the planning stage, suggestions about the design of the new unit had come not only from clinical staff, but from the patients and clients themselves. “The result will be profound and will have lasting benefits for countless individuals for many years to come,” he added.

The $13 million unit was the result of a partnership between private donors and the Government of Quebec. Generous philanthropists contributed $5 million, including a major gift from the estate of the late Carole and Andrew Harper, as well as funds raised from the Foundation’s Mindstrong and Peace of Mind campaigns. The remaining $8 million was provided by the Ministry of Health and Social Services.

Several of the speakers noted that while staff provided exemplary treatment in the old ward on another floor in Pavilion B, the outmoded facilities had not had a substantial upgrade since the 1950s. The new unit is a major leap forward, covering 2,600 square metres, or about 1,000 square metres more than the previous site.

In addition, the Carole and Andrew Harper Psychiatry Inpatient Unit has private rooms for all of its 48 beds, a special geriatric psychiatry section, a large occupational therapy room, three activity centres, and various meeting rooms where staff can confer among themselves or meet with patients and families.

While the old ward averaged one bathroom for every nine patients, each bathroom in the new unit is shared by only two patients, with showers in almost every bathroom.

And since none of the patients’ rooms is equipped with a phone, several booths—each with a phone, a comfortable bench and a door that closes—are located in various areas in the new unit.

Your support is needed

Construction of the Carole and Andrew Harper Psychiatry Inpatient Unit would not have been possible without the support of generous public donors.

To promote excellence in patient care, teaching and research through your donations, please contact the JGH Foundation (514-340-8251).

The space that houses the unit is the former site of the hospital’s original operating rooms, which became available in 2016 after the Department of Surgery moved to newly constructed facilities in Pavilion K.

Demolition of the surgical area—including the need to deal with a complex network of water pipes, oxygen lines and ventilation ducts—was the most extensive and complicated such project in JGH history.

“This unit recognizes that treatment must encompass the whole person—not just the physical elements, but the mental, emotional and even the spiritual aspects of our patient’s lives.”

Dr. Lawrence Rosenberg, President and CEO of CIUSSS West-Central Montreal, said the numerous changes “demonstrate our commitment to patient-centred care—in other words, making every effort to improve treatment and care, based primarily on what is best for the patient.

“This unit also recognizes that treatment must encompass the whole person—not just the physical elements, but the mental, emotional and even the spiritual aspects of our patient’s lives.

“The up-to-date setting and amenities will serve as a proper complement to the modern techniques—including the digital technology of telehealth—that are used by the doctors, nurses and other professionals in our healthcare and social services teams.”

Edward Wiltzer, Past Chairman of the Board of the JGH Foundation, singled out Larry Sidel, the Foundation’s Executive Vice-President, for his commitment to the project and for developing fund-raising events that contributed to its completion.

Perhaps most important of all, said Mr. Wiltzer, “we got people to understand that we have to take away the stigma from mental health, which is an illness like anything else. This is a dream come true! We have done unbelievable things here.” 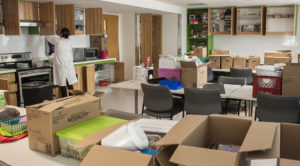 A team member in the Psychiatry Department stocks the Occupational Therapy Room in the Carole and Andrew Harper Psychiatry Inpatient Unit. 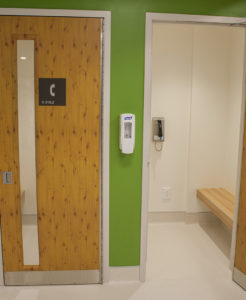 Two of the phone booths available to patients in the Carole and Andrew Harper Psychiatry Inpatient Unit. 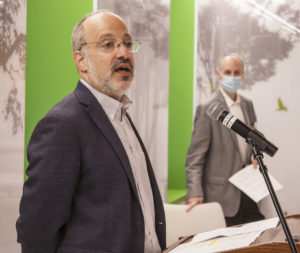 Bram Freedman, President and CEO of the JGH Foundation. 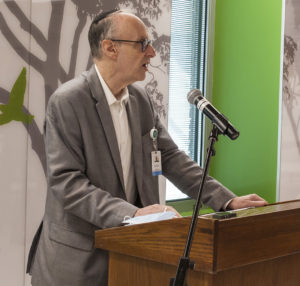 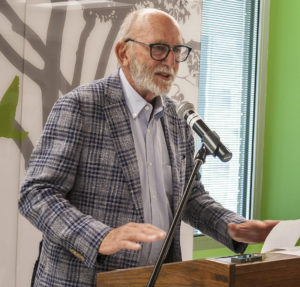 Edward Wiltzer, Past Chairman of the Board of the JGH Foundation. 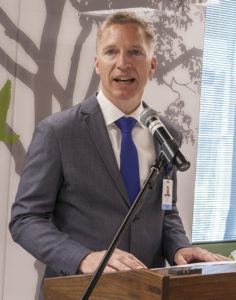 Videos and more photos from the launch of the Carole and Andrew Harper Psychiatry Inpatient Unit.