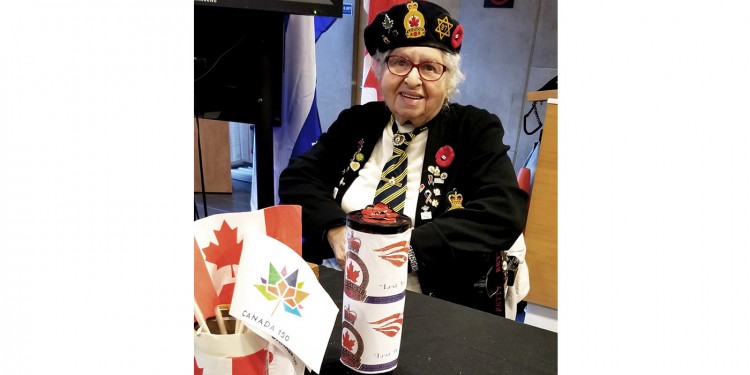 Sandy Bernstein sells Remembrance Day poppies in the main lobby of the JGH.

As soon as Remembrance Day appears on the horizon, JGH patients, visitors and staff can count on seeing Sandy Bernstein at her familiar post, selling poppies in the main lobby.

For at least 10 years at the JGH, Mrs. Bernstein, 91, has been dispensing smiles with her poppies, especially when parents bring young children to drop a coin into the box, choose a pin and sometime learn a bit about Canadian history.

Selling poppies is a tradition that Mrs. Bernstein and her late husband, Joe, began decades ago, when they put a box of pins on the counter of their store, which sold tobacco and gift supplies.

Mrs. Bernstein, a volunteer for the JGH and the Royal Canadian Legion, says the annual poppy sale is also her way of honouring her husband, a veteran of the British army and prisoner of war in World War II, and her father, who fought for Canada in World War I.

“I was brought up to do good deeds,” she adds with a smile.