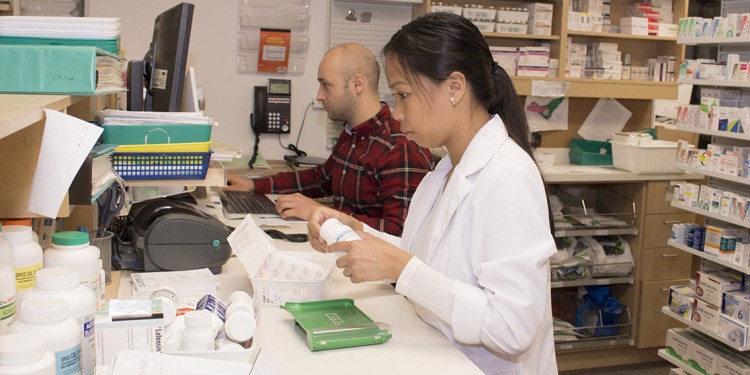 Questions about disposing of your medication can be answered by your local pharmacist, such as those in the Proxim outlet at the Jewish General Hospital.

If you haven’t organized your medicine cabinet in a while, don’t put it off any longer! August is National Drug Drop-off Month in Canada, which means all of your expired or unused drugs need to go.

“It’s been widely reported that abuse of medication, particularly opioid abuse, happens in homes where opioids are discovered and consumed by children or their friends,” says Eva Cohen, Chief of Pharmacy for CIUSSS West-Central Montreal. “This has contributed to the opioid epidemic and the very high level of adverse effects associated with opioid abuse.”

Ms. Cohen urges parents to keep their medicine in childproof containers that are inaccessible to young kids. More importantly, she warns against keeping extra medicine for future use, since these drugs could potentially be abused. It is not only your children who would be at risk, but you, too.

“It happens a lot with opioids and antibiotics,” Ms. Cohen explains. “The problem with antibiotics is that parents often hold onto them. If they feel an oncoming symptom of something similar to what they had in the past, they self-prescribe and initiate an antibiotic therapy, which is not recommended.”

If this sounds like something you might do, it’s probably time for you to go through your medicine cabinet. But don’t just dump your unused medications into a garbage can or flush them down the drain! That’s not environmentally friendly. Your local pharmacist would be happy to help you dispose of your drugs properly and answer any questions.

According to Drug Free Kids Canada, a not-for-profit organization dedicated to ensuring that homes and communities are safe from mishandled drugs, parents play a major role in preventing drug abuse in their children.

As a parent, you’re the first line of defense, typically because a child is afraid of disappointing a parent or losing a parent’s confidence. So why not make National Drug Drop-off Month an opportunity to educate and warn your children about drug abuse.

Ms. Cohen recalls that early in her career, when local brown bag days were initiated, pharmacists began urging members of the public to bring in all of their medicine in a brown bag, so that consumers and professionals could sort through the drugs together.

“The fact that they’ve made it official now is great,” she says. “It’s an opportunity to increase awareness and get everybody to check their medicine cabinets at least once a year.”

You can learn more about how to safely dispose of drugs from Health Canada.

Can our friendly antibiotics become our foes?