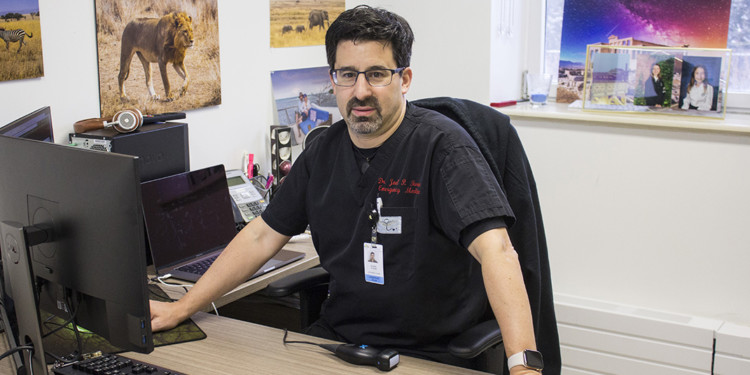 Dr. Joel Turner, a staff physician in the JGH Emergency Department, has been honoured for his many years teaching doctors and medical residents to use point of care ultrasound, a vital and increasingly common tool that has been referred to as “the stethoscope of the 21st century.”

“Point of care ultrasound” refers to ultrasound that is used at the patient’s bedside to provide quick, potentially life-saving, answers to focused clinical questions.  It helps physicians determine a patient’s condition and confirm a diagnosis quickly and accurately.

Though used extensively in the Emergency Department, point of care ultrasound has also proved invaluable in Intensive Care, Internal Medicine, Family Medicine and multiple other specialties.

According to the Association’s website, Dr. Turner has been recognized for his “outstanding work in undergraduate, postgraduate and continuing medical education, and point of care ultrasound education provincially and nationally.

“The criteria used to determine the winning educator candidate were skills as a bedside educator, administrative contribution, curriculum design contribution, quantity of bedside or classroom teaching, originality of contributions, and student feedback.”

“Point of care ultrasound is taught in medical schools across North America as part of the regular undergraduate curriculum. That’s a clear indication of how essential it has become.”

“I’m very humbled by the award,” says Dr. Turner, who is the Program Director of the Emergency Medicine Ultrasound Fellowship at McGill University. “I know many of the leaders in Canada in point of care ultrasound, and many have been my peers and mentors over the past couple of decades. It’s fantastic to be recognized by them.”

“It’s now being used in the Emergency Department to diagnose everything from a retinal detachment, cardiomyopathy, small bowel obstruction and deep vein thrombosis (which we would otherwise never be able to do confidently) to differentiating the causes of a patient’s respiratory situation (is shortness of breath the result of pneumonia, pleural effusion, pulmonary edema or something else?).

“All of this can be done much more accurately and rapidly than with any other diagnostic tools used by the Emergency physician.

“There are many other examples. For instance, point of care ultrasound can help you assess cardiac function in a hypotensive patient to determine whether it’s dangerous or advantageous to give them intravenous fluids. Or if we want to know whether a pregnant woman is presenting with an ectopic pregnancy; we can establish this within minutes, which we were never able to do before.”

Dr. Turner says that in the early 2000s, the use of point of care ultrasound was still somewhat limited and, as a result, instruction was not widely available. In some cases, doctors had to teach themselves to use this tool.

Today, by contrast, teaching is carried out around the world by individuals such as Dr. Turner. While most of his students are residents in emergency medicine, he also teaches undergraduate medical students and residents in internal medicine, intensive care and family medicine, as well as nursing staff in Emergency. This involves training courses, grand rounds presentations, certification exams and bedside instruction.

“Its use has really exploded in recent years,” says Dr. Turner, “and now it’s become a standard tool that’s taught in medical schools across North America as part of the regular undergraduate curriculum. That’s a clear indication of how essential it has become.”