Dr. Lawrence Rosenberg and his family dedicate a Torah scroll to the JGH 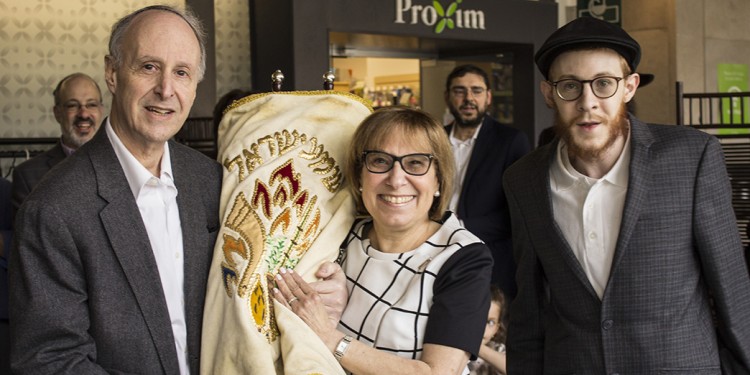 A Torah scroll is dedicated to the chapel of the JGH by Dr. Lawrence Rosenberg, his wife Donna and their son Moshe.

Amid singing and celebration, as well as a few moments of solemnity, a Torah scroll that has been associated with the family of Dr. Lawrence Rosenberg for at least 80 years was dedicated to the JGH chapel on May 19.

After the scroll has been attached to the two wooden rollers, Rabbi Baruch Perton holds it, while Dr. Lawrence Rosenberg wraps it in a ceremonial cover.

Dr. Rosenberg, President and CEO of CIUSSS West-Central Montreal, told his two dozen guests at a ceremony in the hospital that he is gratified the chapel finally has a Torah scroll of its own, after having used borrowed scrolls for many years.

A Torah scroll, hand-lettered in Hebrew on parchment by a specially trained scribe, contains the Five Books of Moses, the first five books of the Old Testament. Portions of it are read aloud during synagogue services on various occasions, including on Sabbath (Saturday) and major festivals.

Although the scroll was well cared for at the Beth Zion Congregation in Côte Saint-Luc and Congregation Beth-El in the Town of Mount Royal, Dr. Rosenberg felt it should be put to more active use, especially given the need at the JGH.

“I’m very pleased that we’ve made a such good shiddukh with the hospital,” he said, using the Yiddish word for a traditional Jewish pairing of spouses by a matchmaker.

The 90-minute ceremony began in the reception area near the hospital’s main lobby, under the supervision of Rabbi Baruch Perton of the Beth Zion Congregation, where Dr. Rosenberg is a Past President. Lying on a table in front of Rabbi Perton were two long, wooden rollers, each of which had to be affixed to one end of the rolled-up scroll.

Handing Dr. Rosenberg a length of strong twine, Rabbi Perton asked him to thread it through previously prepared holes in the parchment and in one of the rollers, and then to make a tight knot.

After Dr. Rosenberg finished, additional knots were required to secure the scroll to the rollers. The honour of tying them went to Dr. Rosenberg’s wife, Donna; his son, Moshe; Myer Bick, former President and CEO of the JGH Foundation; Bram Freedman, current President and CEO of the Foundation; Rabbi David Banon, a Senior Judge in the Rabbinical Court of Montreal; Rabbi Barak Hetsroni, JGH Chaplain; Beverly Kravitz, the CIUSSS’s Director of Human Resources, Communications, Legal Affairs and Global Security; Alan Maislin, President of the CIUSSS Board of Directors; and Louis Schiff of Congregation Beth-El.

Dr. Rosenberg said the scroll means a great deal to his family, since his great-grandfather, Rabbi Aharon Elimelech Rosenberg, had not only dedicated the scroll originally, but hand-lettered it himself.

He noted that his great-grandfather was the son of Rabbi Yehuda Yudl Rosenberg, who immigrated to Canada from Poland, lived for a while in Toronto and finally settled in Montreal, where he served as the city’s Chief Rabbi in the late 1920s and early ’30s.

The date that was chosen for the JGH dedication was extremely significant, Rabbi Hetsroni explained, since it fell on a day on the Hebrew calendar that is known as “the Second Passover,” a time for repair, renewal and improvement.

In the chapel, Rabbi Moshe Benguira raises the scroll for display, before it is placed in the ark (at rear).

“When people come here on the Sabbath to pray,” Rabbi Hetsroni said, “I tell them that this might not be the most beautiful synagogue in Montreal. This might not be the biggest one. But let me tell you, the walls here are filled with kavahah—that is, the deep emotions of people who come to pray for their loved ones.”

Next, the Torah scroll was wrapped in a ceremonial cover and carried by Rabbi Hetsroni, accompanied by the guests, to the chapel on the six floor of Pavilion B. There the scroll was wound to the place where it would be read aloud during services on Saturday, May 25. After the recitation of Psalm 24, the scroll was placed in the chapel’s ark.

Mrs. Rosenberg was especially delighted that during the ceremony in the chapel, an interested patient in a wheelchair dropped by to watch. “It warms my heart to see this gentleman here today,” she said, “because this is a special occasion for patients, too. We want everyone to feel happy about the arrival of this Torah.”

Clicking on a photo enlarges it.

Assisted by Rabbi Baruch Perton (right), Dr. Lawrence Rosenberg is the first of 10 people to attach the parchment of the Torah scroll to one of the wooden rollers.

In the chapel, the scroll is wound to the place where it will be read aloud during services on May 25.

From the archives: JGH’s first birthing room opens in 1980