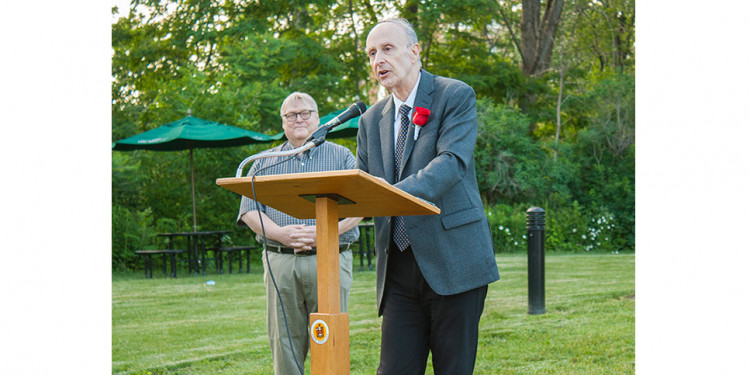 Dr. Lawrence Rosenberg speaks at a ceremony on the lawn behind Côte Saint-Luc City Hall after receiving the D’Arcy-McGee–National Assembly Citizenship Medal. He was introduced by Dr. Gaétan Barrette (at rear). (Click on this or any photo to enlarge it.)

Dr. Lawrence Rosenberg, President and CEO of CIUSSS West-Central Montreal, has been honoured with a D’Arcy-McGee–National Assembly Citizenship Medal in recognition of his career-long commitment to improving the quality of health care and social services.

The medal, one of four presented on June 13 at Côte Saint-Luc City Hall, acknowledges the outstanding achievements of individuals or organizations that have bettered the lives of residents in the provincial riding of D’Arcy-McGee. Recipients of the medal are usually (but not always) residents of the riding. 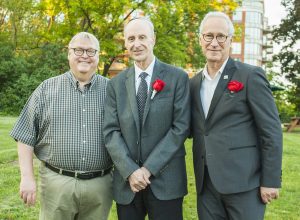 “It’s always gratifying to have one’s efforts and achievements publicly acknowledged,” Dr. Rosenberg said. “However, there’s a special satisfaction that comes in being recognized by the people you live with and work with. That’s why this Citizenship Medal means so very much to me.”

He noted that he is often involved in making decisions that affect the way care is provided to tens of thousands of people, as well as the way thousands of dedicated employees carry out their responsibilities.

However, despite these large numbers, Dr. Rosenberg said he always bears in mind that “each healthcare user is a unique person whose needs and desires must be heard and respected, in order for proper healing and recovery to take place.”

In addition to thanking his wife and family for their support, he extended his appreciation to his “colleagues and fellow managers, as well as to the many clinical and non-clinical employees in all fields.

“I rely on them each and every day, as they aim for excellence in implementing policies and strategies that are taking us in the direction I have laid out for our CIUSSS.”

Many challenges still lie ahead in health care and social services, Dr. Rosenberg said, but “I can also tell you that the future holds great potential, as we find innovative ways of using digital technology to make care safer, more effective and available wherever the user happens to be.” 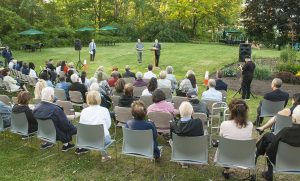 Wide-angle view of Dr. Lawrence Rosenberg speaking at the ceremony on the lawn behind Côte Saint-Luc City Hall.

Dr. Rosenberg was introduced by Dr. Gaétan Barrette, former Minister of Health and Social Services, who praised him for a career in surgery, research and administration that “goes far beyond the Jewish General Hospital or the province of Quebec or our country.”

He described Dr. Rosenberg’s leadership of CIUSSS West-Central Montreal as “outstanding” and he told the audience that “one of the organizations that was the strongest during the pandemic was his—or yours, if I may put it that way.”

Dr. Rosenberg has led CIUSSS West-Central Montreal since it came into existence in 2015. He was appointed Executive Director of the JGH in 2013, having joined the hospital in 2007 as Chief of Surgical Services.

Dr. Rosenberg is a Professor of Surgery and Medicine at McGill University, where he earned a Master of Science degree and a doctorate in experimental surgery.

He also completed post-doctoral studies and a surgical fellowship in transplantation at the University of Michigan, and went on to earn a Master of Engineering degree—the equivalent of an MBA for scientists and engineers—from the University of Waterloo.

Before coming to the JGH, Dr. Rosenberg served as Director of the Multi-Organ Transplant Program at the Montreal General Hospital, inaugurating McGill’s Pancreas Transplant Program and leading the team that performed the first successful liver transplant at McGill.

The D’Arcy-McGee–National Assembly Citizenship Medal has been awarded annually since 2015. It was established by David Birnbaum, the MNA for D’Arcy-McGee, who will be stepping down when his current term ends.

Also honoured with medals at the ceremony were Sidney Margles, a veteran radio newsman and manager; Dorothy Zalcman-Howard, a human rights activist in the Jewish community and in broader society; and the late Noel Alexander, a much-admired Black community leader.