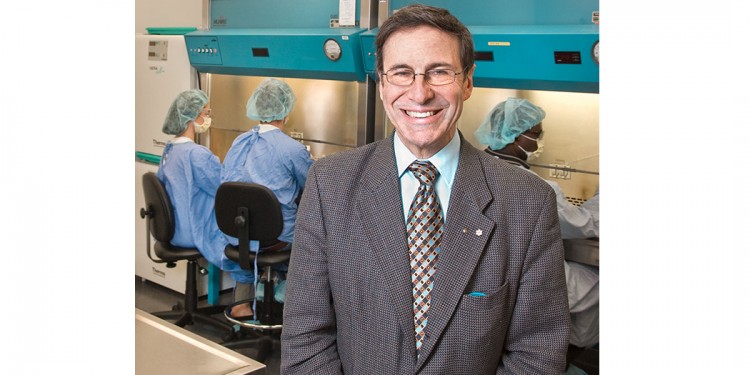 Dr. Mark Wainberg attends the launch of the HIV/AIDS Bio-containment Laboratory in 2007.

Testing and research into HIV/AIDS took a major step forward in June 2007 with the inauguration of a $5 million HIV/AIDS Bio-containment Laboratory whose development was spearheaded by research pioneer Dr. Mark Wainberg.

Dr. Wainberg, who was Director of Research for the Lady Davis Institute at that time, used the lab to grow the HIV/AIDS virus for research and to test tissue samples to determine how patients respond to various types of medication.

The new laboratory, affiliated with the McGill AIDS Centre, was among the few Level 3 facilities in a Canadian hospital. It was also one of only two Quebec centres authorized to check the virus’ genetic sequences to determine whether they had mutated and become resistant to anti-viral drugs.

Opening the lab was the latest research milestone for Dr. Wainberg, who was recognized internationally for his expertise in HIV/AIDS, including development of a drug that has been instrumental in saving millions of lives around the world.

Dr. Wainberg’s determination to take an active role against AIDS was so strong that in the early 1980s, not long after the world-wide threat of AIDS gained prominence, he became the first scientist in Canada to work directly on HIV and to establish a bio-containment facility at the JGH that was equipped to handle this specialized research.

He was also among the first in the world to identify the problem of HIV drug resistance, and he was instrumental in founding the Canadian Association for HIV Research.

This led directly to Dr. Wainberg’s key contribution in 1989: the discovery of the anti-viral drug 3TC, or Lamivudine, which is combined with other medications to treat the infections caused by the human immunodeficiency virus.

Tragically, Dr. Wainberg died on April 11, 2017, while vacationing in Bal Harbour, Florida. He was the recipient of numerous international honours, including the Order of Canada and the Order of Quebec.