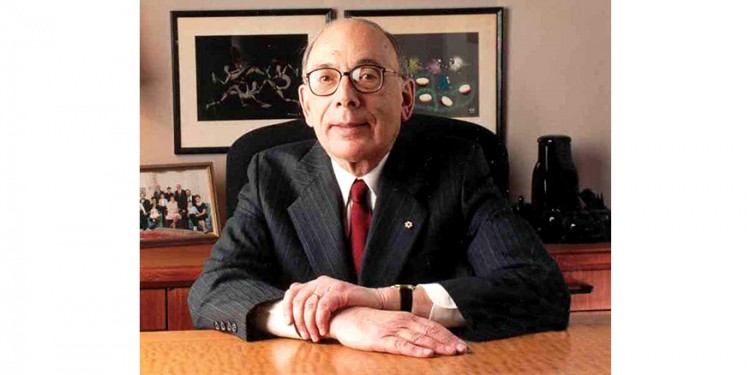 Extensive growth in medical research was among the most notable features in the term of Dr. Samuel O. Freedman, O.C., C.Q., FRSC, who served as Director of the Lady Davis Institute at the JGH from 1991 to 2000. Under his stewardship, the LDI emerged as one of Quebec’s premier medical research facilities.

Dr. Freedman, the LDI’s second director, is one of Canada’s most renowned clinical immunologists. He achieved fame in 1965 as the co-discoverer of the carcinoembryonic antigen (CEA), which led to development of the first practical blood test for diagnosing and managing patients with colorectal cancer. The use of CEA testing soon became universal in diagnosing cancers of the digestive tract.

Dr. Freedman also served as Dean of the Faculty of Medicine at McGill University from 1977 to 1981, and as Academic Vice-Principal at McGill from 1981 to 1991.

Thanks to support from the JGH Foundation, Dr. Freedman led the expansion of the LDI facilities to its current six floors, while recruiting new researchers and modernizing the laboratories. He placed considerable emphasis on translational research—i.e., linking scientific investigations with the clinical demands of the JGH.

Dr. Freedman received numerous honours during his career, including fellowship in the Royal Society of Canada, appointments to the Order of Canada and the National Order of Quebec, the Gairdner Foundation International Award, and the Prix Armand-Frappier, presented by the Government of Quebec for significant contributions to scientific research.

Dr. Freedman received an honorary degree from McGill University in 1992 and was named Professor Emeritus in 2000.

When a patient just can’t sit still, what’s a dentist to do?