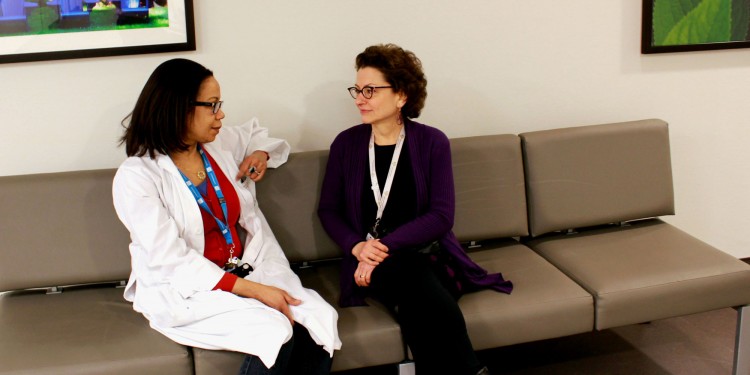 Chalk up another benefit of the Emergency Department’s move to new facilities in Pavilion K: The number of Code Whites—the designation for a violent incident—has declined among emergency psychiatry patients.

Although precise figures are unavailable, the trend is confirmed by Dr. Judy Glass, Director of Emergency Psychiatry, and Guy Lessard, Head Nurse of Outpatient Psychiatry, who attribute the improvement to the department’s calmer atmosphere, roomier facilities and modern design.

Unlike the old Emergency Department, which was vacated in February 2014, the new facility has a specific area for psychiatric patients who enjoy a much greater degree of privacy, confidentiality and freedom of movement. This greatly lowers their feelings of vulnerability and the levels of stress and agitation that contribute to violence, says Dr. Glass.

She notes that in the previous facility, it was not uncommon for psychiatric patients to have to spend all day and night on stretchers in the hallways, where they had little ability to move around and were often disturbed by the constant noise, light and pedestrian traffic of staff and visitors.

In addition, Mr. Lessard says the new Emergency Department has a lounge just for psychiatric patients, who now have the option of eating their meals somewhere other than their stretchers—a choice that was previously unavailable. A special washroom has also been set aside for them, and there’s a spacious lounge with comfortable furniture and a television. Adding to the placid mood in the lounge is artwork that was donated to the JGH by Montreal’s non-profit Art for Healing Foundation.

“Our patients feel they’re being treated more humanely, which leads to a lower risk of violence.” says Dr. Glass. “This means that treatment can be provided more easily and effectively, along with a major improvement to the patient experience.”