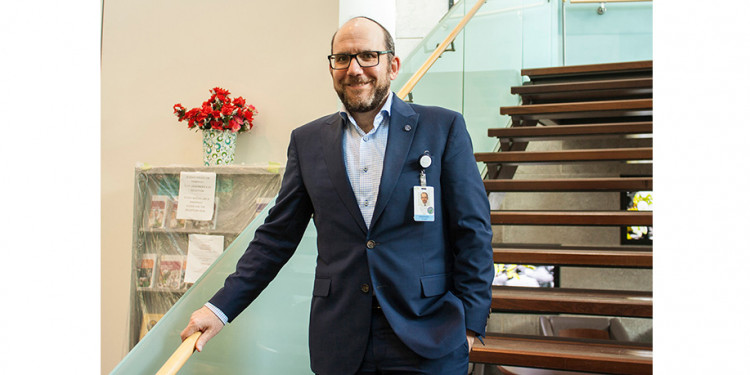 In an ideal world, here’s what would happen: A patient would come to a CLSC with a health problem, be referred to the Emergency Department, be admitted for surgery and later be transferred to a rehabilitation centre. And at each of those facilities, the patient’s full, up-to-date medical record would be accessible to staff.

That ideal world of broad-based accessibility is still a few years away, but it’s a goal Elliott Silverman is eagerly working toward, following his recent appointment as Associate Director of Digital Health for CIUSSS West-Central Montreal.

What the Digital Health team plans to implement is an electronic health record, except that this term is usually used for a digital record that focuses on the activities of a single facility, usually a hospital.

The CIUSSS’s system is called the Connected Health Record (CHR), since it will encompass all of the network’s facilities and truly link the continuum of care.

Development of the CHR is considered one of the largest, most daunting and most difficult project the CIUSSS has ever embarked on, but it’s also one that Mr. Silverman sees as essential.

“I feel truly honoured to be given an opportunity to participate in something of this magnitude and importance,” he says. “It’s a vital means of providing everyone along the patient’s trajectory with a shared medical history that’s within easy reach anywhere in the CIUSSS.

“Ultimately, it will improve safety for healthcare users, because gaps or inconsistencies will no longer exist between one CIUSSS facility and another. The potential for errors will be reduced and we can expect the level of efficiency to rise.”

“I feel truly honoured to be given an opportunity to participate in something of this magnitude and importance.”

The current problem, Mr. Silverman explains, is that various clinical software systems—each with its own specialized capabilities—are in place throughout the CIUSSS. “This means a clinician has to log in to each of them and manage each of them separately.

“By contrast, the Connected Health Record will be self-contained in a single platform. With one login, staff would have everything they need, no matter where they’re located.”

The difficulty is not just in gradually shutting down the old systems and bringing up the new one—although that in itself is a major undertaking. Mr. Silverman says staff will also have to be properly prepared for the long-term changeover and they’ll need extensive training, along with input from patients.

For Mr. Silverman, it will mean drawing upon the varied skills he has honed in fields beyond health care. After graduating from McGill University in computer science in the late 1990s, he started as a business software developer who participated in creating a calendar application for the old Netscape browser.

This was followed by eight years working on simulators for air traffic control in Montreal, with Mr. Silverman progressing from software development to project management.

Also in Montreal, he spent four years in avionics (the electronics of aviation) with a team that developed flight management systems for cockpits. From there, he moved to the railroad industry as a project manager on closed-circuit camera systems and passenger information systems.

Finally, in 2012, Mr. Silverman entered the field of health care, joining the JGH as a Project Manager in Transformational Change. When the CIUSSS came into existence three years later, he was appointed Director of Logistics.

Although the Connected Health Record will occupy an increasing proportion of Mr. Silverman’s time, he will also be involved in other aspects of digital health. These include telehealth; the internet of things (the interconnection via the internet of computing devices embedded in everyday objects); setting up a project management office; and developing a digital health support centre, initially to support staff and later, healthcare users.

As well, he is looking forward to working on data science, which will use the latest data about users to help predict where needs are likely to arise.

Various tools are being implemented to assist the new data science team, including an innovative Israeli software platform called MD Clone,which is capable of creating synthetic healthcare data. This will make data easier to access and analyze, thereby furthering quality improvement and innovation in the CIUSSS.

Through it all, Mr. Silverman sees himself and his colleagues as service providers, the same approach he took as Director of Logistics. “We’re here to make patients’ lives better and the healthcare workers’ jobs easier by giving them tools, support and service.

“In Logistics, I wanted it to be an almost magical experience for staff: They’d reach toward a shelf and the stock would be there. It takes a lot of work to ensure the stock is in place, but that’s our problem, not theirs. They shouldn’t have to call and ask where it is.

“That’s the same philosophy I’m bringing to digital health. Our role is to give staff what they need to do their jobs more effectively, whether it’s the Connected Health Record or some other tool. The less they worry about their tools, the more they can concentrate on what healthcare users need.”