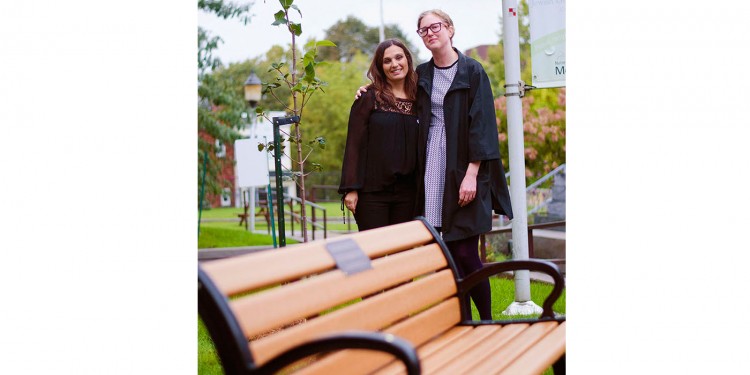 Social Worker Louna Kadoch (left) and Nurse Nadine Fava, Co-Chairs of the Perinatal Loss Committee, attend a ceremony on October 15 where a sapling and a bench were dedicated in memory of losses, whether in utero or after delivery, at the JGH. (Photo by Hanna Bumagin)

A sapling and a bench were dedicated as a place of reflection and commemoration on October 15, as JGH staff joined family members to memorialize the perinatal losses—whether in utero or after delivery—that occurred at the hospital over the past year. About 70 families at the JGH experience this sort of loss annually.

A button was distributed to participants after the ceremony on Pregnancy & Infant Loss Awareness Day on October 15.

“There is no foot too small that it cannot leave an imprint on this world,” says a plaque on the bench, which is located alongside the white jasmine lilac sapling near the main entrance of Pavilion H on Côte-des-Neiges Road.

“For me, there is nothing more important than helping these families,” says organizer Louna Kadoch, a Social Worker in the Maternal-Child Health Unit of the Department of Obstetrics and Gynecology, and Neonatal Intensive Care. “These people come first for me, because a mother’s dream has been shattered and the parents leave the hospital feeling empty.

“I’m aware there’s nothing that I can say that can bring the child back, but I’m also hoping this event will help parents through the grieving process, as they deal with their pain.”

The ceremony, the first of its kind at the JGH, took place on Pregnancy & Infant Loss Awareness Day, which Ms. Kadoch says was launched in the United States in 1988, but is rarely commemorated in Quebec and is only gradually coming to be recognized elsewhere in Canada.

To establish a tradition of observing that day at the JGH, Ms. Kadoch turned to her colleagues in the Perinatal Loss Committee, which she co-chairs with JGH Nurse Nadine Fava. The group, which includes representatives from the hospital and from several other CIUSSS facilities, agreed to her proposal of planting a tree as a symbol of hope, as well as installing a bench to serve as a place of comfort and remembrance for parents.

The Perinatal Loss Committee, with members from various CIUSSS facilities, including the JGH.

During several months of preparation leading up to the ceremony, Ms. Kadoch and her team found donors for the key items.

The tree was provided by Soverdi, a non-profit organization that plants trees in Montreal; the bench by Lewis Rosen of Rosen Group Private Wealth Management and by the JGH Maintenance team; and the plaque by the JGH Foundation.

At the hour-long event, about 50 people listened intently—and sometimes in tears—to a violinist, a singer, the recitation of a poem and some brief speeches. Also on the program were a moment of silence and the ribbon-cutting for the tree and bench.

Among those in attendance were Dr. Apostolos Papageorgiou, Chief of Pediatrics and Neonatology; Dr. Roberta Shear, Director of Obstetrics; and Dr. Cleve Ziegler, Director of Gynecology.

“It was exactly what I envisioned—a day for the families, a day to remember the tiny lives who left us too soon,” says Ms. Kadoch, who hopes the ceremony will continue to be held each year. “I’m also going to let many more people know about the tree and the bench. Maybe they’ll find some peace and comfort there.”