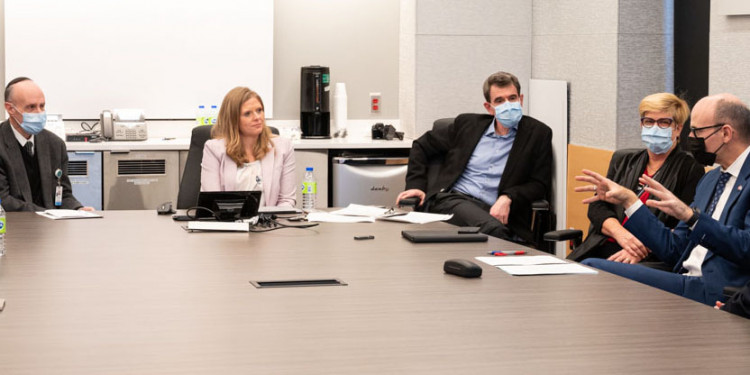 After hearing from leaders of CIUSSS West-Central Montreal about the network’s success in providing patients with virtual care at home, federal Health Minister Jean-Yves Duclos said he counts the CIUSSS among the government’s “absolutely essential partners.”

On November 21, Mr. Duclos concluded a 45-minute meeting with members of the CIUSSS’s Senior Management team by stating that in Ottawa later that day, he would ensure that “you will be put into the database of our absolutely essential partners.” 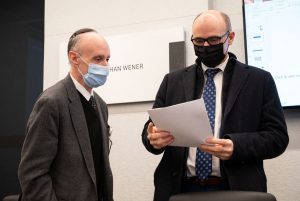 In the coming weeks and months, he said, the federal government plans “to call on leaders like you to put forward their views and their proposals for the future of Canada’s health data system.”

Mr. Duclos said he and his government “will be pushing for digital health, virtual care—all the sorts of things you’re doing now to move quickly, much more quickly” in improving the quality of care.

During the meeting in the JGH Board Room, Anthony Housefather, Member of Parliament for Mount Royal, called the CIUSSS’s presentation “incredibly impressive.”

Mr. Housefather, whose riding includes the JGH and a large portion of the CIUSSS, said the meeting was “really, really helpful and very much in line with Jean-Yves’s philosophy… You’ve given him a lot of food for thought.”

Most of the agenda focused on the Hospital@Home program, plus a discussion of the CIUSSS’s development of a Connected Health Record, the Command Centre and OROT, the network’s Connected Health Innovation Hub.

Dr. Lawrence Rosenberg, President and CEO of the CIUSSS, explained that the network’s fundamental goal is to provide users of health care and social services “with the right care at the right time in whichever setting is most appropriate for them and the safest, most convenient and most comfortable for them.”

He said this approach “also comes with a promise: No matter how we provide care in the future, and no matter where that care is delivered, the needs of our healthcare users will be the focus of our attention.”

The Connected Health Record “is going to happen and it’ll be a Canadian first.”

As well, Dr. Rosenberg emphasized the ground-breaking nature of the Connected Health Record. This complex tool is being built from scratch, so that it will cover the entire trajectory of patient care and will not rely on existing software from the United States, which is geared to that country’s private healthcare system, he said.

The CIUSSS’s project “is going to happen and it’ll be a Canadian first,” Dr. Rosenberg said.

Erin Cook, who is

Administrative Co-Director, Virtual Care, and Associate Director of Quality, Transformation, Evaluation, Performance and Ethics, told the minister that by mid‑November, Hospital@Home had handled 121 cases, allowing 818 hospital-bed days to be saved. This meant that beds became available more promptly for patients who needed to receive care in person at the JGH.

Not only have surveys recorded a high level of satisfaction among patients who have used Hospital@Home, but the program makes financial sense, Ms. Cook said.

Dr. Lawrence Rudski, Medical Director of Virtual Care and Director of the Azrieli Heart Centre at the JGH, said the advantage of virtual care was especially noteworthy during the early months of the COVID-19 pandemic when many members of staff—including some doctors and nurses—could not leave their homes for health-related reasons.

Nevertheless, Dr. Rudski said, these professionals were able to continue helping patients by working remotely, thereby providing much-needed care and taking some of the pressure off staff who were providing in-person care.

“As we move forward in our digital transformation,” Ms. Cook said, “we are envisioning a future where patients will benefit from a seamless care experience, where they receive care everywhere, and where brick-and-mortar institutions are no longer the central point of care delivery.”