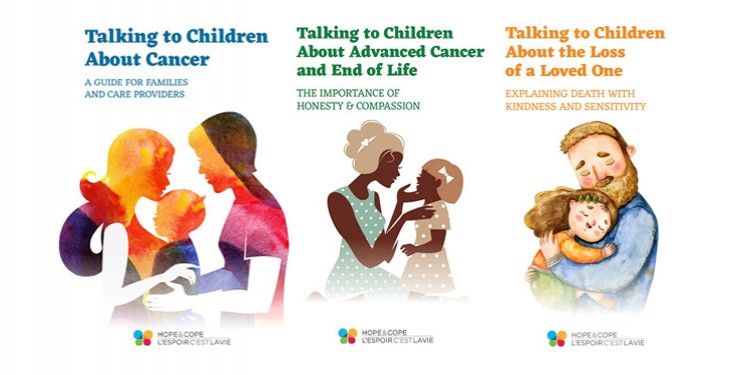 A three-part series of books, published by Hope & Cope, advises parents how to speak with their children about the effect of cancer on their family.

“Should we even be saying ‘cancer’ in front of our children?”

It was a deeply disturbing question that only added to the fear and uncertainty that a couple in their early 40s was facing. Dad felt inclined to utter the dreaded word, but Mom, who’d recently been diagnosed with cancer, was hesitant.

Sandy Lipkus with two of the books that she wrote to advise parents how to speak with their children about cancer.

Dad understood his wife’s misgivings: Maybe speaking so bluntly might emotionally overwhelm their 7-year-old son and 5-year-old daughter. Wouldn’t it be easier just to tell them that mommy wasn’t feeling well and was going to the doctor for some medicine?

“Those were tough questions without any easy answers—and, unfortunately, it’s a dilemma that many families are forced to deal with,” says Arianna Carosella, a JGH social worker.

So, in addition to counselling the parents, Ms. Carosella handed them a copy of Talking to Children About Cancer – A Guide for Families and Care Providers, the first in a three-part series published by Hope & Cope.

Each of the colourfully illustrated, bilingual volumes runs about 20 pages and was researched, written and edited by Hope & Cope’s Sandy Lipkus, with financial support from Hope & Cope and private donors.

All three books can be downloaded at no cost.

Creating a sense of normalcy

“I’m so thankful these books are available,” says Ms. Carosella, who regularly meets parents and children by referral and through the JGH’s Young Adult Oncology Clinic and Gynecology Oncology Clinic.

“The text creates a sense of normalcy in the midst of a very scary experience,” she continues. “As parents, our first instinct is to shield our children from unpleasant aspects of life. But these books explain how sharing information in a sensitive, age-appropriate manner can actually help us protect our kids.

“Giving them proper answers about cancer is a way of caring, of showing love, of letting them know that we’re going to be there for them, even if life as we used to know it is changing.”

Sadly, the mother whom Ms. Carosella counselled ultimately died of her illness. However, Ms. Carosella later heard from the father, who was “very thankful for the information. The book became a kind of map that helped him navigate through what he called a chaotic moment in his life.”

This was the outcome that Ms. Lipkus was hoping for when she began working on her first book in 2016. Having been a social worker for more than 20 years, an instructor in McGill University’s School of Social Work and a kindergarten teacher, Ms. Lipkus felt her diverse experience and skills could be used to create a unique approach to speaking with kids about cancer.

Responding to a need for guidance

“Patients were coming to my office and saying they needed help in talking with their children,” recalls Ms. Lipkus, who is Coordinator of the Hope & Cope office in the JGH Division of Radiation Oncology. She also coordinates Hope & Cope’s En famille program, which is geared to the needs of young families where a parent has been diagnosed with cancer.

Ms. Lipkus invited the patients to bring their children to the hospital to speak with her—a process that the youngsters found comforting and supportive. However, after the session ended, the parents also asked for something written that they could refer to later.

As well, Ms. Lipkus was receiving requests for reference material from other healthcare professionals at the JGH, but all she could provide was some photocopied notes. This started her wondering whether a book on the subject had ever been published by another hospital or cancer centre.

As far as she could determine after a wide-ranging search, nothing suitable had been produced in Canada, and certainly nothing in both official languages. So, with Hope & Cope’s backing, she took matters into her own hands.

Advice for people in special circumstances

In the course of writing, Ms. Lipkus found that some special situations also needed to be addressed:

The initial project, plus its two sequels, were completed in Ms. Lipkus’ spare time, on evenings and weekends. She also arranged for the manuscripts to be reviewed by a nurse, a patient, a Hope & Cope editor, a member of staff in Palliative Care at the JGH, a medical librarian and a lay person.

“I want to be sure that someone who reads this material and knows nothing about the subject beforehand will find the writing clear and understandable,” she explains.

In all three books, Ms. Lipkus advises parents always to be compassionate, but frank. The goal is “to speak with kids honestly, using child-friendly terms. They should always look for an understandable way to describe subjects like chemotherapy or a funeral or remission or metastases—all the words that children will hear at home.

“Of key importance when I meet with parents is that I don’t just hand them a book and say, ‘Read this.’ I speak with them on a personal level, in the same way that I hope they’ll speak with their children. The book is there for guidance, but it’s the personal connection that really matters.”