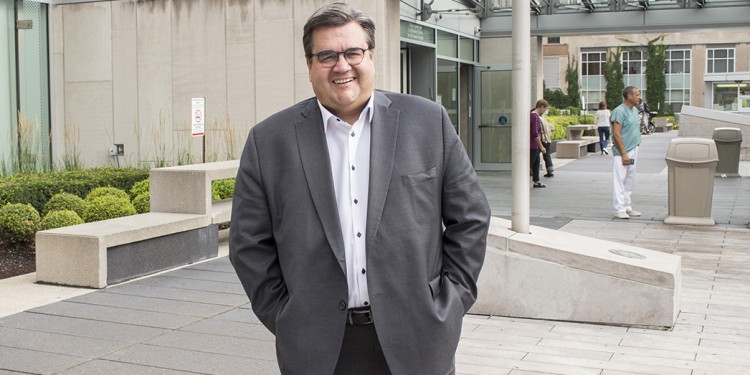 Denis Coderre at the front entrance of the JGH.

“Here, let me show you something interesting,” says Denis Coderre, as he reaches into the pocket of his jacket and places a brownish-gray stone on the desk in front of him. “I carry it with me wherever I go.”

For several seconds, Mr. Coderre stares quietly at this small, nondescript stone, a precious keepsake that he plucked from the site of what is widely regarded as the Holocaust’s most notorious death camp.

The former Mayor of Montreal is sitting in a JGH office along the main-floor corridor of Pavilion B, whose door bears the sign, “Hon. Denis Coderre, Ambassadeur – Ambassador”, identifying his latest role in a long and varied career. Since late spring, he has been on the team of the JGH Foundation, where he is drawing on his experience and political savvy to provide advice and to help open doors to a broader and more varied pool of potential donors.

On a more personal level, Mr. Coderre has also grown closer to Jewish culture and tradition, as well as to the hospital which he has long admired and now describes as “an icon of success.” Symbolic of these feelings is the little stone, taken from the grounds of what used to be the Auschwitz-Birkenau concentration camp, which now functions as a museum and a grim memorial to the Jewish genocide of World War II.

Last April, Mr. Coderre participated in the March of the Living, a journey of education and remembrance that took him to the former death camp—an experience that he says deepened what was already “a very special relationship with the Jewish community. And now, at the Foundation, I’m honoured to be a torch-bearer.”

While raising funds is at the heart of what Mr. Coderre is doing, he says he sees his role as “not just as a matter of money, but doing what I can to make society better. To be an ambassador is to be able to reflect all of the great work that has been done and continues to be done in this hospital. I’m adding another perspective to what is already a highly successful team.”

“Having Mr. Coderre on board is a major benefit to the JGH Foundation,” says Alan Maislin, President of the Board of Directors of CIUSSS West-Central Montreal. “By adding his insights and connections to the already significant abilities of the Foundation’s staff, Mr. Coderre is further strengthening the hospital itself, which plays a key role in a great many of the healthcare activities in our healthcare network.”

“I think I can be pretty useful when people in the Foundation or the hospital need guidance. I can humbly contribute my two cents.”

In his paid position, Mr. Coderre spends three days a week with the Foundation, but he notes that because of his unique responsibilities, a single day might sometimes entail round-the-clock activity.

Mr. Coderre says he was approached about the position in December 2017 and spent the holidays pondering the offer. In the end, he decided to accept, because “it’s a great way for me to thank the community and remain active, because we have many values in common.”

Though best known to Montrealers as the Mayor from 2013 to 2017, Mr. Coderre has a record of political service as a Liberal Member of Parliament that dates back to 1997, when he was first elected in the riding of Bourassa. In subsequent years, he held various federal posts, including Immigration Minister, Secretary of State for Amateur Sport, and President of the Privy Council.

Some of Mr. Coderre’s current duties include organizing and being the focal point of specific Foundation events, such as the Ambassador’s Cocktail on November 6. In general, however, he remains close to key individuals in the city’s business and political sectors, “and I think I can be pretty useful when people in the Foundation or the hospital need guidance. I can humbly contribute my two cents.”

In doing so, he will work closely with the Foundation’s new President and CEO, Bram Freedman, whom Mr. Coderre has known since Mr. Freedman’s time at Concordia University in the 2010s.

“Denis is a tremendous asset to the Foundation,” Mr. Freedman says. “He is a door opener and is passionate about every project that he takes on including his role at the JGH Foundation.”

Mr. Coderre sees a common purpose with Mr. Freedman. “The two of us share values and principles,” Mr. Coderre says. “Bram and his team also communicate a real sense of dedication and ownership of their work, as well as a genuine desire to help others.”

And there are fringe benefits, too. Perhaps the most enjoyable is the instant recognition that greets Mr. Coderre when he leaves his office to walk the halls of the JGH and better acquaint himself with its vast array of programs and services. Some passers-by shake his hand warmly, while others pause to snap a photo with their phones.