From Orthopedics to Oncology, the human touch makes all the difference 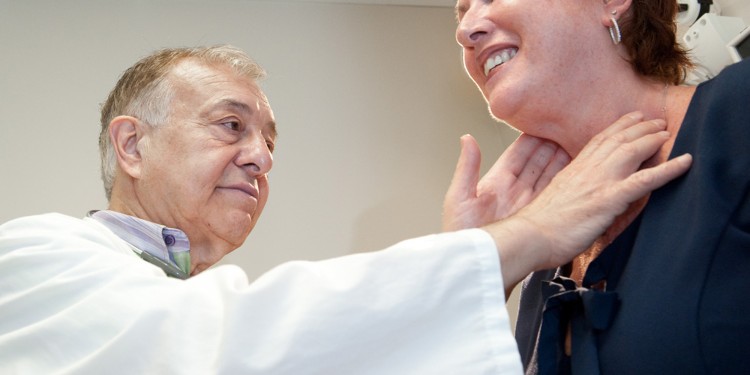 With her cancer in remission, Mei-Lin Yee gets a follow-up examination from her oncologist, Dr. Lawrence Panasci.

“There was an interest not just in my medical file, but in me as a person”

Left hip versus right hip: That’s all it takes for Stephen Leopold to recall, with conflicting feelings of pain and delight, what can transform a patient experience from excruciating (at an American hospital) to exceptional (at the Jewish General Hospital).

Mr. Leopold, a Montreal businessman, had been living in the United States in May 2009 when he underwent an operation by one of the city’s most respected orthopedic surgeons to replace his left hip. The prospect of surgery didn’t trouble him, since he’d heard about hip-replacement patients leaving the hospital after three days and playing golf after ten.

“Instead of being in the hospital for just three days, I left with a wheelchair and a walker 14 days after I went in,” he says with a sigh. “And I was on the walker for a good month afterwards. The only golf I saw for the next two months was on TV. Eventually, though, the hip healed well and it’s been good ever since.”

Mr. Leopold noticed that Dr. Zukor’s warm, upbeat approach had permeated the entire Orthopedics Department. “I always saw him with a smile on his face and he made me feel like the most important patient he’d ever had.

That’s not to say that the JGH is problem-free—an acknowledgement that’s at the heart of the hospital’s complaints process and its quality-improvement program (see article on page 13). The need to do more to enhance all aspects of the hospital experience is also what has motivated the JGH to establish its Office of the Patient Experience. Mr. Leopold’s story helps to illustrate the sorts of positive and negative experiences that can occur in any hospital.

What aggravated Mr. Leopold’s predicament was what he calls “the attitude” of much of the hospital staff. In one particularly distressing incident at 3:00 a.m., Mr. Leopold remembers being awakened when the glaring lights in his hospital room were suddenly switched on. “A fellow with a mask on his face practically shouted one word: ‘Blood!’ Then he took my blood, turned out the lights and just left. I was so shaken—or, to be more precise, I was shaking—that I couldn’t fall asleep for the rest of the night.”

Mr. Leopold also got the distinct impression that no one was paying much attention to him, especially the doctor who showed up every morning in the company of six or seven interns. “He’d say, ‘How are you feeling today?’, and I’d hardly get in four words before he’d say, ‘Thank you very much,’ and then make some notes and leave, followed by this line of interns. All sorts of people were coming and going, but it didn’t seem as if they were really geared to getting me out of there or to getting me better.”

By 2010, when Mr. Leopold returned to Montreal, his right hip had begun bothering him. But the memory of his U.S. experience was so unnerving that he delayed seeking medical help until he could barely walk. After being referred to Dr. David Zukor, JGH Chief of Orthopedic Surgery, he was immediately struck by Dr. Zukor’s patience and clarity in explaining what to expect in the operation in February 2013.

Equally impressive—and comforting—was Dr. Zukor’s sense of humour, as he informed Mr. Leopold that the surgery would be performed under local and not the general anesthetic that had been used in the operation on his left hip. “He said, ‘You’ll really be a little bit awake the whole time. So you might want to wear earphones to drown out what sounds like a lot of plumbing and carpentry work.’”

Finally, the best of the stories that Mr. Leopold had heard about satisfied hip-replacement patients came true for him: The day after the Tuesday operation, he was up and using a walker. On Thursday, he covered nearly a mile with the walker in the JGH corridors. And on Friday, he was discharged while holding his cane in the air.

“If I’d known how, I would have twirled that cane like Charlie Chaplin, because I didn’t use it in my entire walk out of the hospital. I didn’t need it at home either, except to use the hooked part to lift my right leg onto the bed. I’ve kept my Charlie Chaplin cane as a memento.”

Though his hospital stay was relatively short, Mr. Leopold noticed that Dr. Zukor’s warm, upbeat approach had permeated the entire Orthopedics Department. “I always saw him with a smile on his face and he made me feel like the most important patient he’d ever had.

“The same was true for each and every member of his staff, who were always so nice and accommodating. There was far greater attentiveness and interest in the patient than I ever saw in New York. It’s amazing how different the results can be with the exact same operation, which is why I can’t say enough good things about the JGH experience.”

For Mei-Lin Yee, the quality of the patient experience was particularly important, since her regular contact with the JGH stretched over five difficult years, from the time her cancer was diagnosed until it went into remission last February. “I am superwoman,” jokes Ms. Yee, a fan of superhero comics. “I keep my cape in my car.”

In late 2008, Ms. Yee began to feel that something was wrong, but her pains were variously diagnosed at a local clinic as anything from a pulled muscle to a cyst. Finally, in spring 2009, concerned about the steadily growing lump under one arm, she was referred to the Marlene & Joel King Breast Centre at the JGH. Ultrasound confirmed the presence of a four-centimetre mass.

Within two weeks, Ms. Yee had an appointment with Dr. Shannon Fraser, JGH Chief of General Surgery, who explained that the lymph node had tested positive for cancer. Ms. Yee was also booked for a colonoscopy and gastroscopy the following day, because the biopsy had read positive for gastrointestinal cancer, not breast cancer.

This is where the positive patient experience really kicked in for Ms. Yee, from the supportive atmosphere of the Breast Centre to Dr. Fraser’s patient approach. “I was relieved that it wasn’t all just announced to me, but that I was given an explanation of what would happen next. I’m the type of person who needs to get things done, so the fact that Dr. Fraser called and said, ‘This is what it is and this is what we’re doing next’ was really encouraging.”

However, the tests were inconclusive about the type of cancer that Ms. Yee had. This prompted Dr. Fraser to arrange for her to see Dr. Lawrence Panasci (who became Ms. Yee’s regular JGH oncologist), as well as JGH experts in gynecologic and lung cancer.

“I saw one after the other,” Ms. Yee recalls, “but I could tell they were not working in silos, which I was extremely impressed by. I would see one doctor and he would say to me, ‘I’ve just gotten off the phone with…’ or ‘I’ve just received an e-mail from…’ So it was clear to me that everybody was on the same page.

“It was so heartening to hear that communication was taking place, and also that each doctor felt no shame in consulting somebody else who knew more about a particular aspect of cancer. No egos were involved.”

At first, the prospects seemed grim—an 18-month prognosis—because Ms. Yee was diagnosed with stage 4 cancer of unknown origin. This meant that despite the presence of the lump, the cancer could not be categorized as coming from a specific spot in her body. However, Dr. Panasci and his colleagues balanced their no-nonsense medical information with “reminders that there were options and that science is moving so rapidly that I should not let myself become overwhelmed with dismay.

“We also developed a rapport where Dr. Panasci and the nurses understood what I was comfortable hearing and what I was not able to hear. In speaking with me, they knew how things needed to be phrased, given my personality and my need to keep on plugging. So they adapted the way they treated me to the type of person that I am.

“A perfect example was the fifth and final chemotherapy regimen that I was on, the one that put me into remission. It was only after Dr. Panasci realized it was really working and reducing the disease that he told me he had originally given the regimen just a 5 per cent chance of working. He knew how important it was for me to stay positive.”

Altogether, in just under five years, Ms. Yee endured no fewer than 174 chemotherapy treatments which, for other patients, would have turned the hospital into a source of dread. However, for her, the positive patient experience actually made the JGH and its staff seem like a safe haven. This motivated her to spend even more time in the hospital as volunteer starting in early 2012, performing administrative tasks twice a week in the JGH Department of Dentistry (where her mother, Patricia Yee, works).

Trained as a lawyer and experienced in human resources, Ms. Yee also met occasionally with other cancer patients (on the request of a nurse or social worker) and informally advised them about overcoming difficulties in such areas as medical insurance or job security—something she intends to continue on a more structured basis for Hope & Cope.

“This is becoming an era of personalized cancer treatment,” says Ms. Yee, “but because a primary tumour was never found in my case, not much medical personalization could be done. It was pretty much hit and miss to find out what did and did not work. But Dr. Panasci and the nurses at the Segal Cancer Centre compensated by providing personalized emotional care.

“Every time I met with Dr. Panasci, he would ask me a personal question or recall things I had told him the last time we met. Or, if I was meeting with a resident, he would say to me, ‘Dr. Panasci would like to know how your vacation was.’

“So I realized that not only was Dr. Panasci speaking with the residents about my medical file, he was mentioning a few personal things about me, so that they could understand the context of my relationship with him. It would be about my vacation or my children or something that made the conversation friendlier. And it showed there was an interest not just in my medical file, but in me as a person.”

When the patient experience ends in disappointment

Helping patients chart a course
through a sea of ethical dilemmas