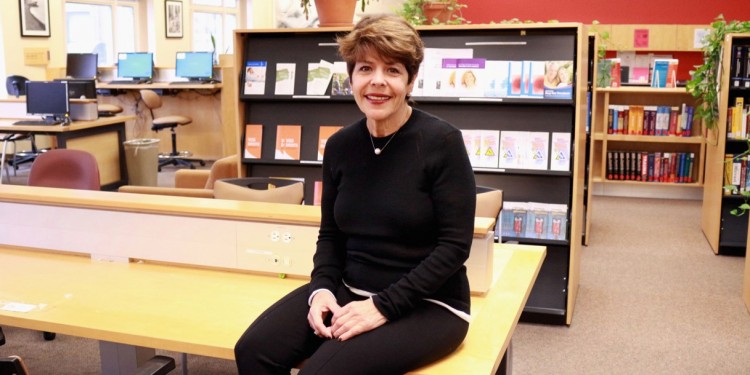 In December 2015, Arlene Greenberg paused to reflect on the highlights of her career, just as she was about to retire as Chief Medical Librarian of the JGH Health Sciences Library.

Imagine that it’s the late 1970s or early ’80s, and you’re a doctor, nurse or other healthcare professional who has come to the JGH Health Sciences Library for information that could make a difference to the well-being of your patient.

You can’t explore the internet, because the web doesn’t yet exist—at least, not as we know it today. And you can’t scan a database, because personal computers (and databases) are virtually unknown. Tablet or smartphone? Forget them; they’re decades away.

Your only recourse is to ask a librarian to conduct a search of the literature, which consists mainly of printed journals and books. If you need a particular book, you might consult a card catalogue—thousands of cards in multi-drawer cabinets that point you toward the appropriate volume on one of the dozens of seven-foot-high bookcases that fill the Health Sciences Library.

It’s the librarians who act as the vital link to keep information flowing by assembling the library’s collection of printed materials, borrowing items from other libraries, and using their expertise to track down hard-to-find information.

That, in a nutshell, was Arlene Greenberg’s world when she joined the library of the Lady Davis Institute in 1970, and then moved on to become the JGH’s Chief Medical Librarian in 1978.

This past December, as she prepared to retire after nearly 47 years, Ms. Greenberg recalled with fondness the bookish atmosphere of the pre-digital era. But, she quickly added, the current speed of data retrieval and the ease of finding information by checking multiple databases are far preferable to what existed earlier.

Today’s instant availability of information—on the library’s (and users’) laptops and computer terminals—was worth the trade-off, said Ms. Greenberg, because it has meant improving the speed and quality of the information that healthcare professionals receive. Ultimately, this has a direct impact on the quality of patients’ care.

“Losing those many, many bound volumes, journals and stacks enabled us, as librarians, to gain access to a treasure-trove of resources, including more than 8,000 e‑journals, databases and e-books,” she said. “In health care, where time can be a critical factor, patients reap the benefits if we can find what we’re after in a matter of minutes or even seconds.”

One of the most significant changes, Ms. Greenberg said, is that patients and their relatives are now encouraged to visit the Health Sciences Library to get reliable facts about a particular illness or condition.

Arlene Greenberg is shown in 1983, consulting McGill University’s catalogue on a microfiche reader in the JGH Health Sciences Library. Use of the reader was a major advance that enabled librarians to track down a wider range of medical information in the years just before online catalogues were introduced.

The turning point came in 2000, when Hope & Cope started to refer cancer patients to Ms. Greenberg, who helped them find detailed information about their diagnoses on the internet.

Two years later, the Patient and Family Resource Centre (PFRC) was launched to steer patients to trusted websites. On this foundation the library built the Patient Education Network, which was introduced in 2012 to help patients search the PFRC collection, locate relevant books or articles, and even browse healthcare materials developed by JGH professionals.

Today members of library staff also answer email questions from the public and are available, by appointment, to meet with anyone who needs assistance in finding relevant information.

In the pre-digital era, books and journals—on towering bookcases that have disappeared from the JGH Health Sciences Library—were the primary sources of medical information.

“It’s wonderful that the library was able to evolve in this way,” said Ms. Greenberg. “The team that’s in place now—in fact, everyone I’ve worked with over the years—has been enthusiastic about learning and keeping up with the changes in technology. They make the library an inviting place, and I’m proud to hear from medical residents and other users who say they love to come here to study.”

Ms. Greenberg called the opportunity to work in the Health Sciences Library “a great privilege and an honour, because I’ve always felt the respect and support of the JGH for the growth of our library, and the hospital’s recognition of the library’s contribution to the healthcare professionals and the patients they serve. Working in such an inspring environment motivated me to my do best.

“Not many people can say they’ve worked in a single place for nearly five decades, but I’m proud to say I’ve done just that. I’ve always felt that as the library continued to grow, I grew personally and professionally, right alongside it.”