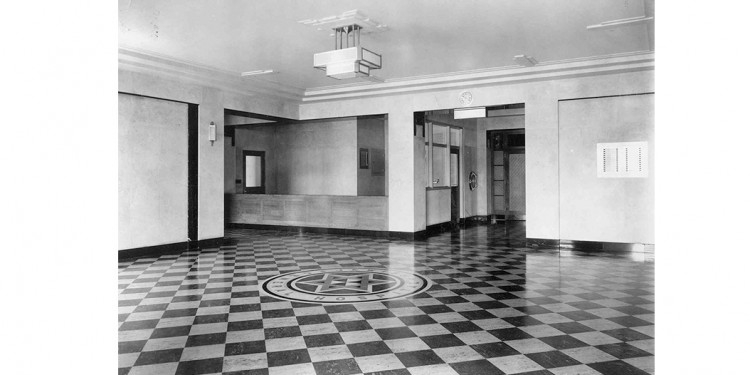 The original lobby of the JGH, with a Star of David and the hospital’s name inlaid in the tile on the floor. At the centre of the photo is the information desk, with the main doors behind the photographer.

The main lobby is often the first point of contact for patients and visitors who come to the JGH. As the hospital has evolved, so has the lobby, whose information kiosks and retail outlets have been modified to keep pace with changing needs and tastes.

The most dramatic change took place in 2008, when the lobby and main entrance were extensively renovated and enlarged in anticipation of the JGH’s 75th anniversary in 2009. Since new facilities for the Division of Radiation Oncology were already slated for construction just below the main entrance, the occasion was used to refurbish and expand the street-level facilities, as well.

The lobby in the 1990s, with the main doors behind the photographer. At the centre is a directory of hospital offices and clinics, and behind it is The Auxiliary’s flower shop. Today the main security desk has replaced The Auxiliary’s book table (at left) and the passageway to Pavilion K begins where people are waiting for an elevator (at right).

The main entrance as it appears today, having been extensively renovated and enlarged to mark the JGH’s 75th anniversary in 2009.