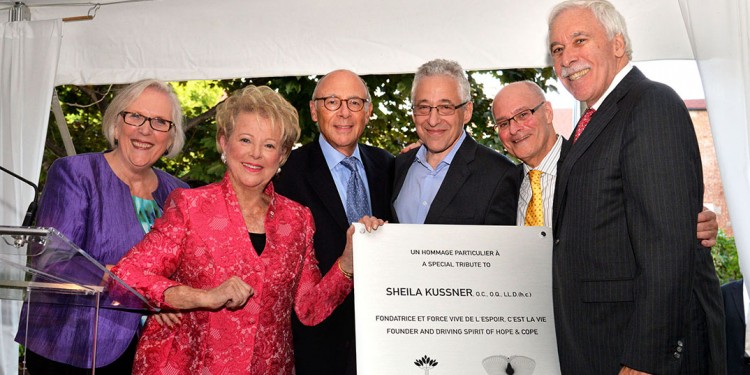 In 1981, Hope & Cope was launched under the auspices of the JGH Auxiliary to use specially trained volunteers (many of whom were cancer survivors) to support and counsel cancer patients and their families.

Within a few years, Hope & Cope became an independent organization (though still very closely linked to the JGH) and a global leader in meeting the psychosocial needs of cancer patients and their families.

At the ceremony in her honour on 2014, Sheila Kussner acknowledged the applause and appreciation of her colleagues and friends.

It was Sheila Kussner whose painful, teenage struggle with cancer convinced her that cancer patients and their families desperately needed emotional and psychological support, as well as practical, reliable information about their disease. And it was Mrs. Kussner who launched Hope & Cope at the JGH after convincing nay-sayers that valuable support could be provided by volunteers who themselves had had experience with cancer.

In addition, she assembled a team of dedicated professionals to help make Hope & Cope an international pioneer in psycho-social assistance during treatment and recovery from cancer.

She became the driving force behind the JGH Hope & Cope Wellness Centre (also known as Lou’s House), which opened in 2007. And she helped establish the Christine and Herschel Victor Hope & Cope Research Chair in Psychosocial Oncology at McGill University.

Hope & Cope has been instrumental in sparking a revolution in attitudes and approach by championing the notion that emotional, psychological and spiritual needs must assume greater importance, as patients forge intimate bonds with volunteers. Mrs. Kussner also foresaw the importance of a multi-disciplinary, team-based approach to care, with the patient as the central focus.

In 1995, the Jewish General Hospital presented her with its highest honour, the Distinguished Service Award. In November 2010, she received a honourary doctorate from the Faculty of Nursing at the University of Montreal, attesting to her broad influence in health care.